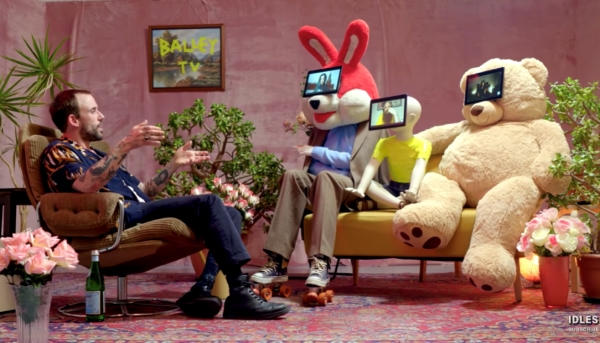 The show sees the IDLES frontman catch up with an array of musicians and artists for relatively directionless half-hour conversations.

Filmed in isolation, with discussions ranging everywhere from current events to music production and staying sane in quarantine, Balley TV is locked in for a full schedule of episodes running throughout the summer.

Following last month's pilot episode that saw Talbot virtually sit down with The Streets' Mike Skinner and Nadya Tolokonnikova of Pussy Riot, Balley TV is set to welcome an esteemed selection of guests between now and the final episode on 14 August.

Episodes one and two (the latter featuring Lauren Mayberry of CHVRCHES and London-based lyricist Hak Baker) are available to stream now.

With four more episodes to release, Balley TV will be hosting the likes of Arlo Parks, Billy Bragg, Kate Tempest and Sharon Van Etten in the coming weeks.

The launch of Balley TV follows the recent news that IDLES' eagerly-anticipated third album, Ultra Mono, will be released on 25 September.

After the surprise drop of 'Mr Motivator' in May, the band posted a cryptic teaser for the new album on their social media channels and released another new single, 'GROUNDS', last week.

Speaking on the release of the new single, Talbot said:

“We wanted to write a song that embodied self-belief, and gave us self-belief – a counter-punch to all the doubt we build up from all the noise we so easily let in.

Head to IDLES' Facebook page for further news and updates, and find Balley TV over on the band's Youtube channel.