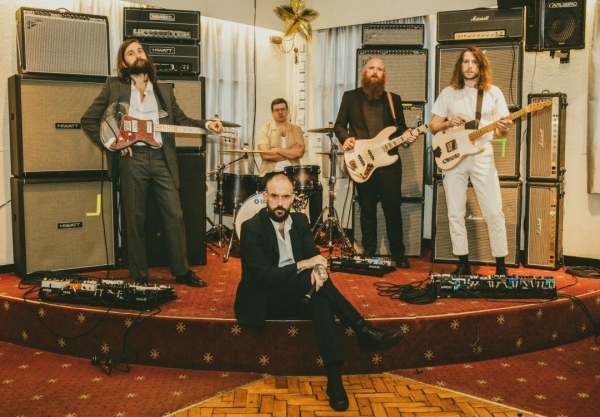 There's an IDLES documentary premiering at the Watershed this month

Don't Go Gentle is showing at the renowned Harbourside cinema ahead of its nationwide release.

A brand-new documentary following revered Bristol band IDLES is set to premiere at the Watershed this month, showing at the Harbourside cinema for one night only on Wednesday 23 June.

Titled Don't Go Gentle, the film follows the band as they bring their no-nonsense sound to stages and festivals across the UK and around the world, spreading their unwavering message of community and tolerance along the way.

The premiere becomes the latest addition to a strong Watershed programme this month, after the cinema was finally able to reopen its doors in May after a long period of closure.

We're heading to the Silver Screen!

We've teamed up with @docnrollfestival to release Don't Go Gentle widely across 50+ UK cinemas from 2 July. Tickets available now, and in coming weeks, via -https://t.co/5HjS0dIFsj Irish dates and more will be added soon.

Widely regarded as one of the most exciting bands coming out of the UK right now, IDLES' stock has been constantly on the rise since they emerged in Bristol in the mid-2010s.

Following on from the huge success of their first two albums, Brutalism in 2017 and Joy as an Act of Resistance a year later, IDLES' most recently released their huge third record, Ultra Mono, which reached Number One in the UK Albums Chart.

The film follows IDLES as they fight for a place in an increasingly divided socio-political environment, unexpectedly inspiring and unifying an international community.

As lead singer Joe Talbot and the band tear across stages, tackle stereotypes and empower fans with their bold ethos, the audience are provided with an intimate discussion on mental health and facing the uncomfortable realities of modern life.

Following its premiere in Bristol on Wednesday 23 June, Don't Go Gentle will be previewed in London, Sheffield, Brighton, Cambridge and Exeter ahead of its nationwide cinematic release in July.

Tickets for advance screenings of Don't Go Gentle are on sale now and can be found here via Doc'n Roll Festival.

For more information on IDLES, or to follow news and updates from the band, find them on Twitter.