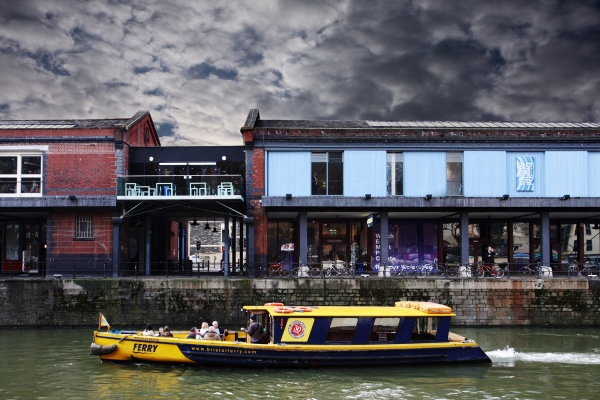 Bristol's Watershed is back: find out what's on this week

Arts venue, cinema and café bar Watershed is making its long-awaited return after months of closure.

Some overdue good news for Bristol film fans this week, as much-loved independent cinema Watershed has finally reopened its doors after another long period of COVID-related closure.

Located on Canon's Road in the heart of Bristol's harbourside, the Watershed is one of the city's best-loved cinema venues and a proud champion of film in all forms, from big-budget pictures to independent and cult hits.

With the Watershed now officially back open for business (with a range of COVID safety measures in place), read on for a quick rundown of what's coming up in May, including triple-Oscar-winner Nomadland and Shaka King's Judas and the Black Messiah.

Bristol, we're back! We're so excited to announce the Watershed building will re-open on Tue 18 May.

We have missed you so much.

One of the most talked-about releases of 2021, Chloe Zhao's triple-Oscar-winning Nomadland gives an intimate portrayal of a group of people living on the road in the American West.

Reeling from the death of her beloved husband and the loss of their home in Nevada, main character Fern travels from town to town in a kitted-out van, picking up seasonal work where she can get it.

Starring Frances McDormand and brimming with Zhao's unique methods and processes, Nomadland is populated with compassionate studies of real people as well as an introspective look at the communities that have grown from the ruins America's brutal service economy.

Echoing the story of lesser-known cult classic It's All Gone Pete Tong, Darius Marder's directorial debut The Sound of Metal sees heavy metal drummer and former addict Ruben who, after losing his hearing, is forced to re-evaluate his place in the world.

Oscar-nominated Riz Ahmed and co-star Olivia Cooke shine as a couple living and touring in Ruben's beat-up RV playing loud, frenzied and passionate music, as a ringing in his ears quickly gives way to deafness, threatening his life and livelihood.

Co-writer of The Place Beyond The Pines, Marder uses innovative and experimental sound design to create powerful scenes that portray a tangible sense of Ruben's sonic journey and disorientation as he adjusts to life with less sound.

Judas and the Black Messiah | Wednesday 19 - Thursday 27 May

Arguably the most eagerly-anticipated cinematic release of 2021 depicts the true story of Chicago Black Panther Chairman Fred Hampton and the dark and dubious circumstances that surrounded his death in 1969.

Director Shaka King, making his big-screen debut, tells the stories of both Hampton and petty criminal-turned-FBI-informant William O'Neal in this hard-hitting drama, composed with gripping editing and eye-catching cinematography.

At the heart of Judas and the Black Messiah is a trilogy of stellar performances from LaKeith Stanfield, Dominique Fishback and Daniel Kaluuya, with the latter picking up a Golden Globe, BAFTA and Oscar for his portrayal of Hampton.

Depicting the delicate nature of family and assimilation in 1980s America, Minari follows a Korean-American family who move to a tiny farm in search of a better life and their own American dream.

David (Alan Kim), a seven-year-old with a heart murmur, moves with his parents and sister from California to rural Arkansas, where his father Jacob (Stephen Yeun) plans to start a farm specialising in Korean vegetables while his mother Monica (Yeri Han) worries about his ambitions.

Funny, moving and deeply insightful, Minari represents a rare look at the challenges of the Asian-American experience, the undeniable resilience of family, and what really makes a home.

Another directorial debut on the Watershed's reopening lineup sees Billie Piper star in her own dark, funny, no-holds-barred anti-romcom about a woman's struggles in work and love.

Mandy is chaotic, confrontational and vulnerable, but so are her estranged parents and needy new partner. The fallout from these constantly colliding characters is the backdrop for Piper's scorches-earth exploration of self-worth in a time of reclaimed feminism and contentious politics.

A refreshing take on a relatively tired genre, Rare Beasts looks at the minefield of contemporary careers and relationships in a way that has rarely been seen on the big screen to date.

Award-winning director Kelly Reichardt (Meek's Cutoff, Wendy and Lucy) returns with the hugely pleasurable First Cow, a gripping story of friendship and petty crime on the harsh frontier of the Pacific Northwest.

The pair team up to hatch a dangerous plant to steal milk from a wealthy landowner's prized Jersey cow to create delicious fried cakes for sale at the local market.

Despite the simplicity of the premise, Reichardt paints an authentic picture of harsh 19th-century frontier life, depicting the unsettling quietude of rural America and calling into question the foundations on which the nation was built.

In this exhilarating thriller from BAFTA-nominated British filmmaker Aneil Karia, emotionally unstable airport security officer Joseph goes on a chaotic odyssey through London, unable to process his loneliness, insomnia and unresolved feelings for his co-worker, Lily.

Ben Whishaw's raw performance as the main character is a jittery, distressing masterclass, while Karia's creative use of sound and imagery contribute to an increasingly immersive and claustrophobic atmosphere as the story progresses.