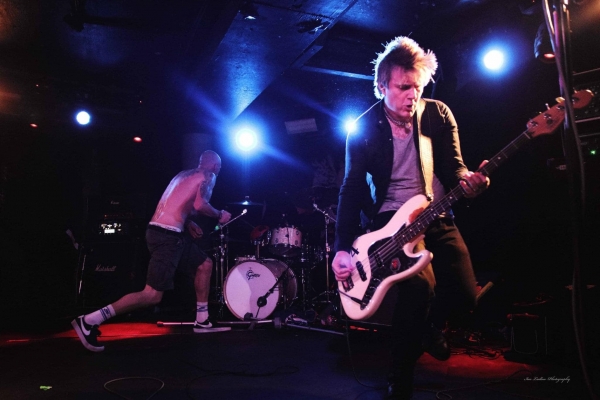 Catch a special night of performance this week.

This week, Thursday 15 September, a special night of performance is coming to Bristol courtesy of three high-octane acts.

Grand Theft Audio, Scott Sorry and CJ Wildheart will each bring their impressive catalogues on the night, before joining forces for a special crowd-pleasing encore.

Killer ?@GTABanned? rehearsal today. The gang are on fire. We’ll be roaring at a venue near you very shortly along with ?@scottsorry? and ?@CJWildheart? You’d caraaaaaazy to miss this shit ???????????? pic.twitter.com/OaaJCfrvV2

Blending the orbits of punk and hip-hop, Grand Theft Audio rose to prominence with their debut album, ‘Blame Everyone’, released in 2000.

A long hiatus followed, with the duo’s sophomore effort not released until September 2022. Despite the lengthy gap, ‘Pass Me The Conch’ picks up where its predecessor left off, proving Grand Theft Audio are as vital as ever.

Crowd pleasers ‘We Love U’ and ‘Stoopid Ass’ are certain to feature, but not before the raw punk musings of support act Scott Sorry and a blistering sonic assault courtesy of CJ Wildheart fill The Fleece.

Jay Butler, one half of Grand Theft Audio, said in a statement: “This isn’t a tour — it’s a three pronged attack from the aural world war three.”  His bandmate, Ritch Battersby, adds: “It’s been way too long since CJ and myself shared the stage with Scott. To say I’m excited is a massive understatement. Old friends, new songs and emotional reunions.”

CJ Wildheart is no less excited, saying in a statement of his own: “The last time I toured solo was back in 2017 and to be out again this September is amazing and long overdue.

“What’s even better is Ritchie and Scott are both bringing their bands along too and I never thought the three of us would be on tour again, it’s so cool. This is a pure slab of good vibing punk, so come out and join us, drink, sing and dance. This is a tour we will never forget.”

If this sounds like it’s for you, don’t hang around. Grab some tickets here.