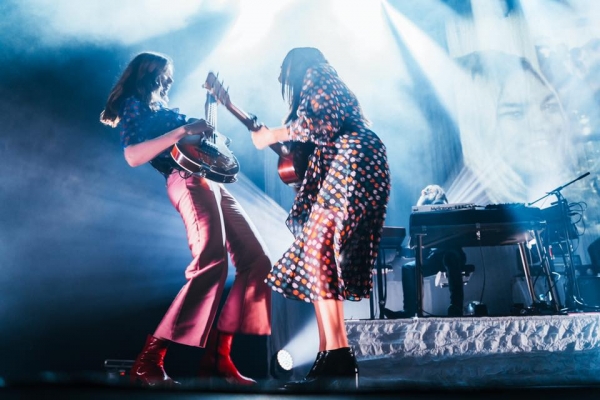 Headlining the penultimate day of the summer series, the Swedish indie folk duo – who will be supported by Bristol favourite Katy J Pearson - are making their long-awaited return to Bristol this summer, having recently teased new music.

Bristol Sounds is making a welcome return to the open-air Lloyds Amphitheatre in June, with a gig set to take place each night between Wednesday 22 and Monday 27.

The two sisters will be exhibiting their cheerful vocal harmonies and thoughtful, pastoral songwriting to a sun-kissed crowd on Bristol’s harbourside on Sunday 26 June.

Klara and Johanna Söderberg began writing music together as young teenagers in the mid-2000s. Their early musical influences revolved around American folk and Americana, in particular the work of Joanna Newsom, Bob Dylan and Fleet Foxes.

Their early material began to appear on MySpace in 2007 and - after the release of their debut EP, Drunken Trees, and a series of live shows when Klara was only 14 – the band gained a fervent following in Sweden.

It was a cover of their heroes, Fleet Foxes, that led to First Aid Kit’s first step onto the international stage, however. Their version of ‘Tiger Mountain Peasant Song prompted the band’s frontman, Robin Pecknold, to praise the track and 2008 saw the band sign a record deal and tour internationally.

2010’s debut full-length record The Big Black & the Blue led to a support slot with indie rock mainstays Bright Eyes and sophomore effort The Lion’s Roar (2012) received critical acclaim from the likes of Rolling Stone and reached number one in Sweden.

However, it was 2014’s Stay Gold that truly broke into worldwide charts, also winning Album of the Year at Sweden’s Grammis. Following the release, First Aid Kit toured extensively worldwide and even made an appearance on The Late Show with David Letterman.

The duo’s fourth EP, Ruins (2018), again topped the Swedish charts and, this time, managed to break into the UK top five – gaining widespread praise along the way.

Since then, recorded material has been few and far between (other than 2020’s Who by Fire: Live Tribute to Leonard Cohen) but that has not stopped First Aid Kit carry on their remarkable rise to indie stardom with a Brit Awards nomination coming in 2019.

The two-piece, who will likely be supported by a full band, have not played in Bristol since their 2014 show at The Bristol Beacon (then Colston Hall) and the indie-folk sisters’ long-awaited return is sure to prove popular, particularly now that ever-popular West Country singer-songwriter Katy J Pearson has been announced as support.

Tickets for the First Aid Kit gig at Bristol harbourside on Sunday 25 June are available to purchase here.