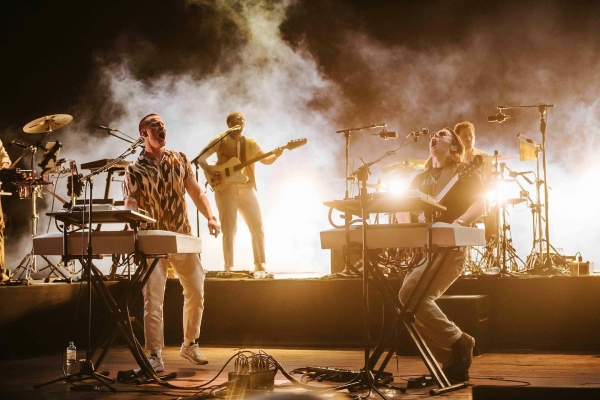 Feel-good electronic music duo, Jungle, will be the fourth artist to take to the harbourside stage this summer with a dance-heavy Saturday night show.

Bristol Sounds is making a welcome return to the open-air Lloyds Amphitheatre in June, with a gig set to take place each night between Wednesday 22 and Monday 27.

With their latest record, Loving in Stereo, truly demonstrating the dance duo’s ability to create dancefloor igniting hits that traverse the plains of dynamic disco and beyond, Jungle are sure to prove a popular attraction.

The two-piece, along with their band, will play Bristol Sounds on Saturday 25 June.

Bristol, we are excited to announce that we are coming on June 25th and that Cologne is now sold out ???? Get tickets for our other dates, a few tickets have been added for Hamburg?? https://t.co/hN42rG7lL1 pic.twitter.com/8VMxzxG8o4

Made up of producers and childhood friends Josh Lloyd-Watson and Tom McFarland, Jungle formed in 2013. They attracted a great deal of intrigue due to the mystery surrounding the band; the duo’s identities were kept secret, focusing instead on videos and artwork.

Innovative to their core, Jungle wanted their live show to differ from the typical electronic live show. Rather than reproducing their material from laptops, they invited live musicians to join them onstage – thus forming a collective of sorts.

Jungle truly reached the public consciousness in 2014 when, after a slew of singles, they released their Mercury-nominated debut self-titled album. The two-piece also had high profile appearances at Texas’ South by Southwest, Glastonbury and on ‘Jimmy Kimmel Live!’.

2018’s sophomore record For Ever was followed last year by Loving in Stereo. A neo-funk body of work at its core, the album is a sleek, high-energy effort that incorporates both hip-hop and soul.

Away from their recorded work, Jungle have been praised for their feel-good and banger heavy live show. Complete with their surrounding collective, Jungle have a slickness to their set that does justice to their released material. See below for a video of the duo, and their collective, perform in a Paris metro.

Jungle will be the fourth act on the Bristol Sounds 2022 bill, with Noel Gallagher’s High Flying Birds, Paulo Nutini (sold out) and Elbow beginning the series and First Aid Kit and The War On Drugs closing it.

Tickets for Jungle’s gig at Bristol harbourside on Saturday 25 June are available to purchase here.