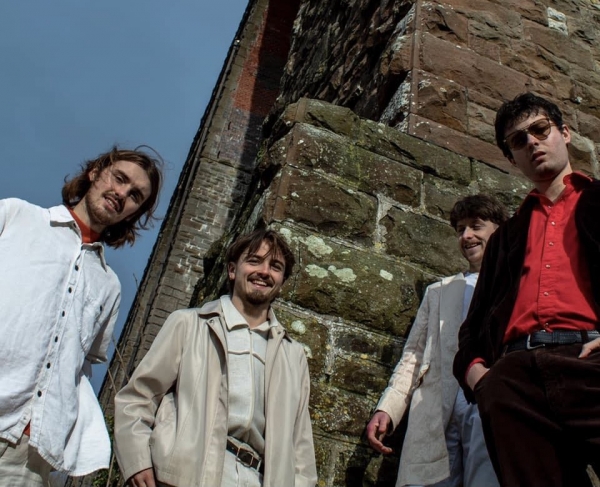 Entitled ‘Dances on Tableaus’, the rustic track and its accompanying video distinctly demonstrate the group’s unique fascination with texture and ambience.

The single is coupled with a beautifully “ethereal” and folky music video courtesy of Bristol-based videographer and photographer Tom Whitson.

‘Dances on Tableaus’ is out now on all the usual streaming platforms, listen HERE.

Indeed, ‘meandering’ seems the perfect word to describe a band that are undoubtedly singular in their musical approach.; the band improvise, stumble and explore the world beyond their individual influences, creating a delicately complete sound.

This experimental approach allows Melotone to embark on a journey that takes them through a diverse and unpredictable musical landscape, drawing comparisons to Alabama Shakes, Jeff Buckley and Gal Costa due to their rich and rustic sound.

Debut single, ‘Dances On Tableaus’, is an audaciously experimental first effort. Definitively a track rather than a disciplined single, the enticing chimes and chords make it an unpredictable yet flowing song.

Much like the Wicker Man-esque portrayal of the clowns and mime in the music video, there is a vulnerability to the song. Frontman Alec Madeley’s vocals betray a fragility that, combined with the indistinct yet introspective lyricism, creates the impression of an unreliable and unguarded narrator.

On the song, Madeley (pictured above) commented: “Dances on Tableaus is really a reactionary piece to a hectic week of live shows back in Autumn 2021, which addresses the reality of sometimes feeling as if you haven't been truly heard by the crowds that you've been playing to all week”.

Tom Whitson’s video is the perfect accompaniment to the track, with its focus on nature and folk undertones. Whitson has spoken lovingly about the collaboration, saying: ‘Melotone’s sound draws you in, immerses you in the music and carries you away.

“This music video is a whimsical take on the nature of performance, which guides the viewer down a similar journey.

“'Dances on Tableaus’ has an earthy yet ethereal quality which often takes you to unexpected places, something Melotone aren’t strangers to... yet the music video will resonate with anyone treading down an uncertain path - with the right people around you, you pull through the unexpected places and find something special.” Head to Whitson's website to find out more about his work.

Watch the brand-new video for Melotone’s ‘Dances on Tableaus’ HERE.