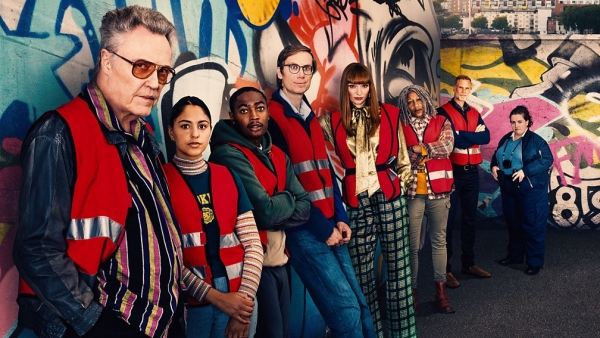 Set in Bristol, the critically-acclaimed first series was one of the BBC's most-watched comedy shows of 2021.

Bristol's Watershed cinema is set to host an exclusive premiere of the second series of Stephen Merchant's hit comedy-thriller series The Outlaws.

Crowned the BBC's biggest comedy launch of last year notching over 11 million streams on iPlayer, the show was filmed on location across Bristol, with scenes shot in Clifton, Stokes Croft and Gloucester Road.

Merchant, along with Executive Producer Luke Alkin, Director Alicia MacDonald, Producer Fran du Pille and star Jessica Gunning (Diane), will be on hand to take part in an exclusive Q&A session after a screening of the new series' first episode.

Tickets for the one-off event, taking place on Tuesday 24 May, are on sale now in limited numbers - find out more and get yours here.

RTS West of England Event, May 24th
Exclusive preview screening of The Outlaws Series 2 followed by a Q&A with cast and crew including creator and writer @StephenMerchant and Jessica Gunning (Diane)@wshed
Book your ticket now!https://t.co/1a1DEzrWSu pic.twitter.com/T5YQXuU10A

Centred around seven strangers forced to undertake community service, series two catches up with the group as they face the fallout from their actions in the first season, with time left to serve on their sentences.

Brushes with the criminal underworld and close shaves with the authorities become commonplace as The Outlaws are forced to depend on one another and work with unlikely allies to atone for their sins.

The show has retained its full cast from series one, including world-renowned actor Christopher Walken as elderly con Frank, and Merchant himself as hapless lawyer Greg.

We wanted Frank to feel exotic and mysterious and charismatic and funny and cool and Mr Walken was top of the list. Yes I’m blown away he’s in the show – and I was even more blown away that we went to Stonehenge together! https://t.co/V5xvbw0nCW

Watershed, in collaboration RTS West of England, will screen the first episode of The Outlaws series two on Tuesday 24 May, followed by a Q&A session with members of the cast and crew.

The much-loved Harbourside cinema also hosted the premiere of the show's first season last year, which saw the show's creators and cast take to the red carpet as part of a memorable screening.

The Outlaws series two is set to arrive on BBC One and BBC iPlayer in June. Catch up on the full first season via BBC iPlayer.