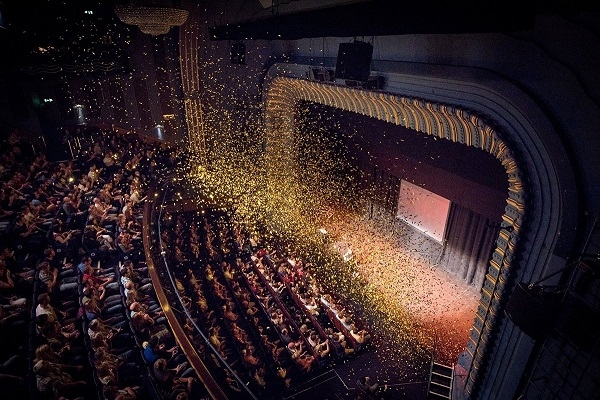 Theatre in Bristol: Ten unmissable shows on the way in May & June

Sink your teeth into another top-notch run of live performances across some of the city's top theatre venues.

Bristol renowned around the world as a cultural and artistic hub, with live music, art and theatre drawing hundreds to all corners of the city week in, week out.

An array of productions will be setting up shop over the coming weeks - from a feminist adaptation of a literary classic at the country’s longest-running theatre to a high-budget tale of a wealthy 12-year-old at The Hippodrome, Bristol has it all.

Here, in no particular order, we’ve taken a look at ten of the theatrical highlights coming at Unit 15, Bristol Old Vic, The Bristol Hippodrome, The Wardrobe Theatre and Tobacco Factory in May and June.

Read on to find out more and be sure to secure your tickets ASAP to avoid missing out!

Whether it will rain or not today, these Singin' In The Rain - @intherainsocial production photos bring a smile to our faces! ??

Kicking off our list of theatre highlights for the next two months is Miracle Theatre’s radical production of former poet laureate Carol Ann Duffy’s adaptation of Everyman.

Everyman lives life to its full, working hard and playing harder with everything he could dream of… until death comes calling. Everyman explores whether it is only in death that we can comprehend life.

The production is visiting the circus training and performance space as part of a UK tour.

In collaboration with Bristol Old Vic Theatre School, The Wardrobe Theatre is set to present a season of new works and adaptations presented by the 8 graduate directors from the Theatre School with a double bill each night.

These nights see productions of Hamlet and Picnic at Hanging Rock; Stockholm and The City; Bull and How My Light Is Spent and, finally, Jumpers For Goalposts and Girl In The Machine all take to the Old Market stage.

???? Here's an idea for #bankholiday - if you haven't yet got your tickets for this year's Directors' Festival, grab them today!

????? Some performances now have limited availability and the festival kicks off this Thursday @WardrobeTheatre. See https://t.co/3YeuMSQQG1 to book pic.twitter.com/OuQ99sllst

This live art, feminist ‘adaptation’ of the classic novel Little Women is visiting Bristol Old Vic for two dates in May and June, with the second being a signed performance.

Coming from the bonkers minds of the Figs in Wigs theatre company (Often Onstage, Disruptive Women), this mad, comical and irreverent production deconstructs - and pokes fun at - society’s obsession with ‘the classics’. Featuring 14 brand new songs as well as all the original songs from the film, School of Rock follows wannabe musician Dewey Finn as he helps the kids at an elite prep school (and the beautiful but uptight headmistress, Miss Mullins) find their rock star within.

Throwback to our performance on Big Night of Musicals in January! ???? ???? #SchoolOfRockTour pic.twitter.com/lG66gAnASE

Bristol’s annual festival of international contemporary theatre is back all over the city next week and taking place throughout the month with Bristol Old Vic hosting two intriguing productions.

Running from Friday 13 till Saturday 21 May, Birthmarked (below) follows a young Jehovah’s Witness coming to terms with his sexuality and finding his feet in a world he previously thought would be destroyed in Armageddon.

Showing for one night only on Monday 23 May, mandla rae’s As British as A Watermelon is an exploration of the Zimbabwean writer and performer’s splintered LGBTQ asylum and childhood migration trauma. Jonathan Church’s critically acclaimed production of legendary musical Singin’ In The Rain is coming to Bristol later this month with a star-studded cast in tow – including Strictly Come Dancing’s Kevin Clifton as ‘Cosmo Brown’.

Follow silent movie star, Don Lockwood, back to 1920s Hollywood as he attempts to traverse the brand-new world of ‘talkies’, getting his heart stolen in the process.

Energetic choreography and over 14,000 litres of water meet with a glorious (and well-loved) score in this stone-cold classic.

No Expectations: The Unscripted Dickens @ The Wardrobe Theatre | Friday 17 May – Thursday 2 June

Running between May and June at The Wardrobe Theatre, this brand-new and eccentric Dickensian tale will be improvised nightly by the local comedy legends behind Closer Each Day: The Improvised Soap Opera.

Having already sold out shows at Brunel’s SS Great Britain, Salisbury Playhouse and plenty of other venues, the highly skilled ensemble cast will present a completely unique show every night; shaped by the audience with Dickensian tropes sprinkled in throughout. In this side-splitting show, 12-year-old Joe Spud is the richest boy in the country with sports cars, crocodiles and £100,000 a week to show for it. However, all this money cannot buy everything, so Joe decides to leave his posh school to try and find a friend at the local comprehensive.

Football and theatre have proved a popular mix in Bristol this year with Bristol Old Vic’s The Red Lion receiving rave reviews. For two days in June, Sabrina Mahfouz and Hollie McNish are bringing their critically acclaimed play, Offside, to the Tobacco Factory.

The play presents the audience with four women from across the centuries who share one thing in common – they live, breathe, and play football. Despite the obstacles faced by these women, the potential for the beautiful game to change lives (and the world) is ever-present. From theatre company RashDash (the team behind the award-winning Three Sisters) and Manchester’s HOME comes Oh Mother, a fever dream made in the heat of the love, exhaustion and chaos of motherhood.

RashDash and their mothers explore the experiences of having and being a mother. Experiences that are relentless, terrible, beautiful, hilarious and necessary all at once.

This list of Bristol’s upcoming productions barely touches all the exciting theatre Bristol has on offer in May and June, with calendars chock full of stellar shows across the city's extensive selection of theatre venues.

For a comprehensive look at what’s coming up at Unit 15, Bristol Old Vic, The Bristol Hippodrome, The Wardrobe Theatre or Tobacco Factory, head to their respective websites.