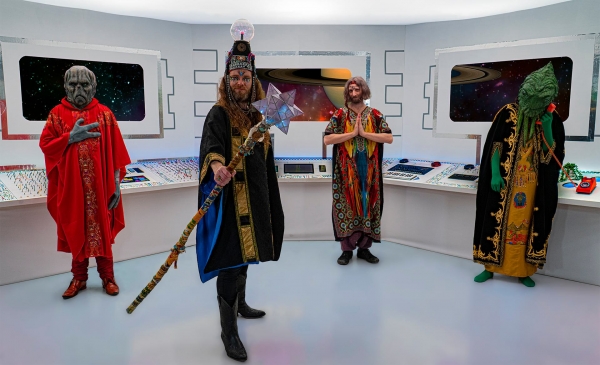 Catch an unmissable live show from the self-proclaimed 'alien ravers' in BS2 later this year.

ATTENTION HUMANS! The ExoKosm Tour is now RESCHEDULED... Soon we will dance together again! https://t.co/dLamODohls pic.twitter.com/mlBxL6MoMx

Coinciding with the release of their eagerly-anticipated second album, ExoKosm, HENGE are embarking on one of their most ambitious tours to date, taking their space-rave oddity to more than 40 venues up and down the UK.

Ahead of their upcoming shows, HENGE have released brand-new, acid-flecked single 'Goldilocks', a love song dedicated to the so-called Goldilocks Zone - the habitable region around a star where the temperature is just right for life to evolve.

Speaking ahead of their tour and album release, HENGE frontman Zpor said: "With ExoKosm we offer a message of hope for humankind, a soundtrack for the joyful exploration of space.

"Turn your gaze to the stars and you will experience the thrill of discovering new worlds beyond your solar system. In doing so you will also learn to cherish the sacred soil of Planet Earth.”

If completely out-there gigs are your thing, HENGE are an absolute must. Catch them in Bristol performing live at the Trinity Centre on Sunday 3 September, with tickets on sale here.