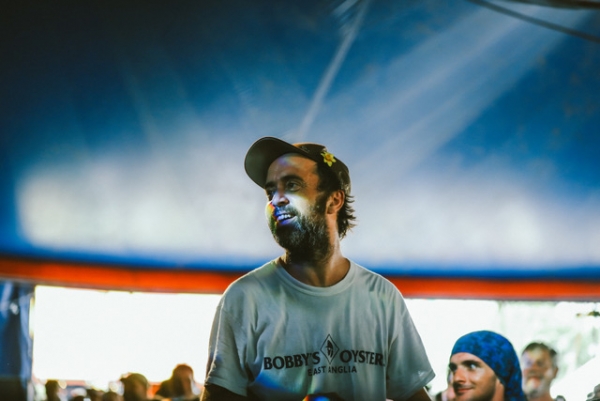 Beans on Toast to play live at Full Moon this weekend

Tickets are selling quickly for an afternoon performance from one of British folk's best-loved artists.

Cult folk singer Beans on Toast will be performing live at Full Moon this weekend, set to take the stage as part of a short tour to explore the viability of the safe return of live music.

An outspoken supporter of the #WeMakeEvents campaign and a proud champion of British grassroots music, he'll be performing two shows in the expansive Full Moon/Attic Bar courtyard on Sunday 16 August.

Tickets for the evening performance have sold out, but you can get your hands on one of a few remaining tables for the early show (14:30-17:30) via Headfirst.

I've got a couple of real-life gigs this weekend. Very excited.

As the country takes its first steps towards a return to normality, musician and activist Beans on Toast has been at the forefront of a proactive approach to bringing live music back to grassroots stages.

In recent weeks, members of the music industry have been discussing and trialing a variety of ideas and measures to allow for the safe return of live events.

Beans on Toast recently hit the headlines as he performed at the UK's first indoor, independent live gig since the beginning of lockdown, playing alongside Frank Turner and Ciara Haidar.

Through lockdown, his notoriously prolific songwriting has shown no signs of letting up, releasing a string of singles as part of a dedicated lockdown series.

The final track of the series, titled 'Save the Music', chimes with recent #WeMakeEvents campaigns. The single is accompanied by a video filmed at the 120-year-old Clapham Grand, an iconic venue at risk of permanent closure.

Originally from Essex, Beans on Toast emerged from the UK's folk scene in the mid-2000s and has carved out something of a cult status in the years since.

Covering a wide range of topics from late-night after-parties to the complexities of politics with a trademark combination of humour and sincerity, his albums have received consistently positive reviews throughout his career.

A short tour for August will see him perform in Devon, Cumbria, East Sussex and, of course, Bristol, with each gig adhering to strict social distancing and safety guidelines.

Tickets for the Bristol performances at Full Moon on Sunday 16 August are available in group bookings at a cost of £72 for up to six people.