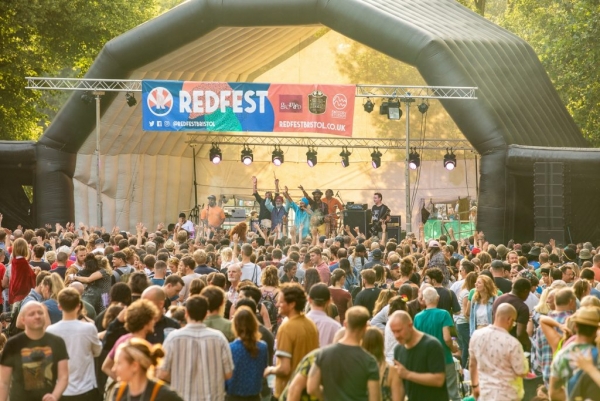 Get ready for 14 hours of live, uninterrupted content on Saturday 1 August.

RedFest, the independent community arts and music festival of East Bristol, has announced it has partnered up with local radio station BCfm to deliver a digital event for 2020.

In normal times, Redfest volunteers would be gearing up to deliver an all-day event in early August at St George Park; an event showcasing local creativity across several, vibrant stages.

But this year, due to the ongoing coronavirus outbreak, the Redfest team have moved the annual celebration online, in partnership with BCfm. Here's what you need to know.

On Saturday 1 August, RedFest will be streaming a mega 14 hours of live, uninterrupted content, from 10:00 to midnight. It'll be broadcast via BCfm and the RedFest website.

A programme boasting the very best of RedFest, the community broadcast is set to feature live music, comedy, theatre, and talks – plus loads more.

And this year, RedFest has announced that 100% of funds donated to the festival's local donation page will go to "truly awesome local causes."

One beneficiary includes The Beehive Centre, a resource for older people and those impacted by isolation in the community.

During the 14-hour live stream, Urban World Collective will present one hour of spoken word from local artists, and Bristol DJ/promoter outfit Funk From The Trunk will perform a set.

Listen to a Funk From The Trunk set on Mixcloud

For the kids, take part in a 'Spy Adventure' with the help of spy teacher Miss Wharthog – she'll teach you the tricks of the trade with an interactive game, courtesy of children's party entertainers The Adventure Team.

Next up, join an interactive dance workshop with Piloxercise and learn the basics of Cuban Salsa Dance.

The workshop will be run by Pilo Selguera. Born and raised in Havana, Cuba, Pilo moved to the UK in 2007.

Then, with over a decade of experience in the fitness and health industry, Pilo established Piloxercise, which now has a studio in Easton. Watch:

Set times are yet to be revealed, but keep up to date on the RedFest Bristol CIC Facebook page.

On the page, you'll find quick previews of confirmed performances, as well as more information about the festival.

Redfest Bristol was founded in 2008 by a small group of volunteers.

The aim? To showcase local artistic talent, and to bring an increased sense of community to East Bristol. It started out as a small-scale event lasting a week.

Since then, the festival has grown into a programme of fringe, community events across the year, culminating with a day-long celebration in St George Park.

A vibrant event for the communities of East Bristol, RedFest is free to attend and aims to showcase local creativity, whether it be music, art or performance.