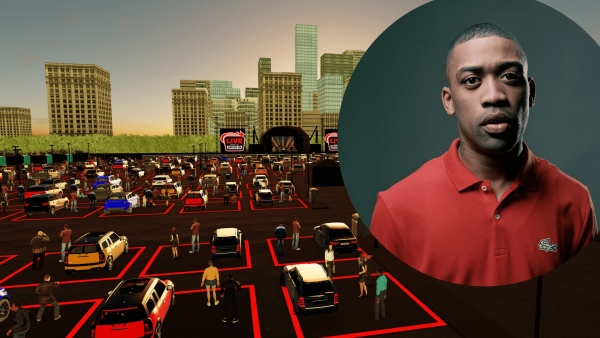 British grime MC Wiley is performing in Bristol this summer – with a healthy dose of social distancing.

This week, the concert series announced that Wiley, the artist behind 2008's 'Wearing My Rolex', has joined the series lineup, and will perform gigs across the UK.

In support of the rapper’s surprise new album ‘Boasty Gang’, which he dropped without warning to mark Windrush Day in the UK, Wiley will perform at the former Airfield on Tuesday 4 August.

JUST ANNOUNCED ???? @WileyCEO Presents Boasty Gang will be playing @UtilitaEnergy Live From The Drive-In this summer.

Find the full line-up and get tickets here.

Often labelled the 'Godfather of Grime', Wiley is the rapper and producer behind hits 'Wearing My Rolex', 'Heatwave' and 'Too Many Man'.

Wiley has influenced the careers of several UK stars including Chip, Novelist, and Dizzee Rascal, who is also set to perform at the Drive-In series.

At the end of 2019, Wiley put out hit dancehall track 'Boasty', featuring Idris Elba. In June, he released The Godfather III, an album he said would be his last.

Weeks later, he released another surprise album - Boasty Gang – The Album. At the drive-in series, Wiley will present Boasty Gang x Seani B.

Get tickets for Wiley Presents Boasty Gang x Seani B at Bristol's Live from the Drive In concert series from Saturday 11 July, 10:00.

The city's hospitality industry is facing more difficulty as a result of the government's Tier 3 restrictions.   Bristol's City Centre BID have officially called for 'special support' measures for retail, hospitality...

Top up your cupboards and support a local business this Christmas.   Popular city centre cafe Taste of Napoli have relaunched their online grocery store, offering everything from ground coffee and cakes to pasta and a range of condiments.   As...