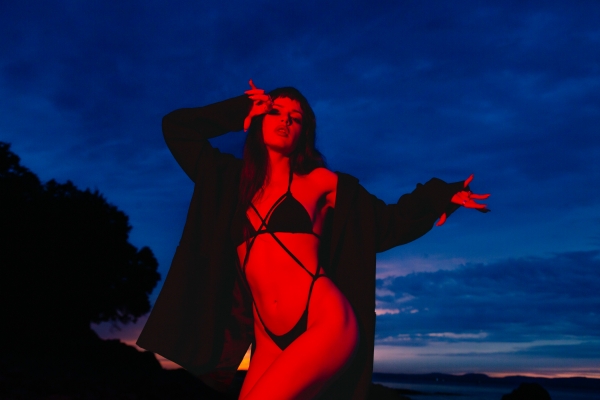 What a way to introduce yourself to the world! Already a staple of Bristol’s progressive music community, Tlya x An’s debut single is a real assault on the senses with experimental glitch pop existing within a pounding club framework.

Tlya (pronounced tah-li-ya) is an artist perfectly poised to force her way into popular culture and ‘Holy J’ is a vastly impressive first demonstration of a deeply original approach to the craft of songwriting and production.

‘Holy J’ offers a perfect glimpse into the artist’s pic-n-mix composition technique, which expertly fuses motifs including Y2K pop and club music into a unique concoction. Her instinctive production allows every ad-lib and synth line to hit like a drop of sherbet, with her saccharine melodies perfectly offset by a menacing smile.

'Holy J' by @tlyaxan premiers today on @BBC6Music! Catch Tlya X An introducing and talking about the inspirations behind the track on @maryannehobbs's show from 10:30am onwards. So excited to have this tune out in the world and grateful for the support xx pic.twitter.com/UF4rUhEdtm

The track is also accompanied by a whirlwind self-directed video in which we are first introduced to her ‘Demons’. On the video, Tlya says:

“The Demons represent the hardships I am working through and learning to accept and even love. The whole process of facing reality and making a change is like a trip full of ups and downs. This video is trying to express the energy and feeling of love / hate, enjoyment /+ suffering that comes with the journey.”

Tlya's label Spinny Nights have become known as one of the UK's most vital independent labels for experimental artists in recent years, graduating from local promoters to a beloved UK-wide label, working with artists such as Lynks, Grove, Nukuluk, Bingo Fury and Robbie & Mona along the way.

Tlya X An’s solo debut comes hot on the heels of a feature on The Yard Woman’s single ‘Steps’ which saw support from BBC Radio 1. While there are no Bristol shows currently announced, Tlya will be playing at Spinny Nights’ London showcase at The Social on 28 February.