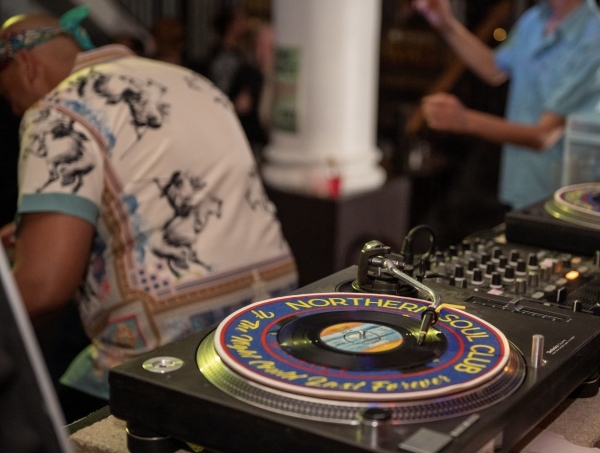 Hosted every month at Old Market Assembly, Bristol Northern Soul Club regularly sells out every event with tickets going on sale exactly one month in advance.

Northern soul has made a remarkable return to dancefloors over the past few years, with the Deptford boys ripping it up in the north and Bristol’s very own Northern Soul Girl, Levanna McLean bringing all the best tunes to Old Market.

Tickets are down to the last 50 (£8 in advance and £10 on the door) so grab yours now from Headfirst.

Levanna McLean has been one of the key faces in the scene over the past 7 years. Videos of her dancing to northern soul music made her a Youtube sensation, eventually leading her to perform with Pharrell Williams at the BRIT Awards.

Since then, she has become a staple of the UK northern soul community and can regularly be seen DJing or dancing in clubs up and down the country. However, Bristol is her physical and spiritual home, and she has crafted the Bristol Northern Soul Club so we can have a specialised night right on our doorstep.

Levanna will be dancing and DJing all night long with other top disc jockeys so attendees can expect to see classics from the likes of Frank Wilson, Marvin Gaye, Curtis Mayfield, The Isley Brothers and The Temptations as well as a whole range of hidden gems.

Listen to Move On Up: The Very Best Of Northern Soul on Spotify for a selection of some of the artists that may feature as well as a glimpse of Levanna in action on the compilation's cover.

Bristol Northern Soul Club is hosted by the beautiful Old Market Assembly on West Street, an ornate building that was once a bank. The venue boasts a massive dance floor, a balcony, and a spacious smoking area.

Tickets for the final event of the year – taking place on Saturday 3 December – are running very low. Purchase yours for £8 here.

For a rundown of everything coming up at Old Market Assembly, head to the venue website.