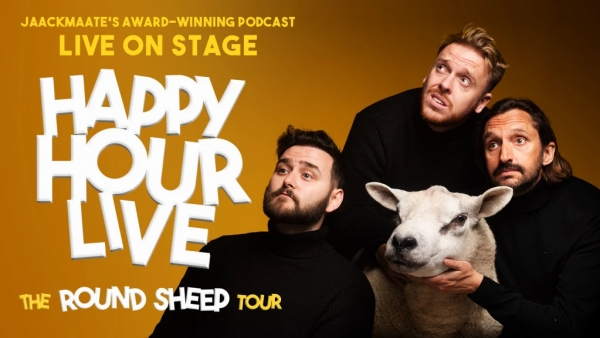 JaackMaate’s award-winning podcast, Happy Hour, featuring Stevie White & Robbie Knox is one of Spotify’s most popular UK podcasts – and it’s coming to Bristol on its first tour ever.

JaackMaate is a YouTube star known for his commentary videos – putting his truly incisive wit and absolutely unbridled enthusiasm to work on big topics like reality TV, popular culture and the antics of his fellow YouTubers.

In November 2018, much to the wild delight of his legions of fans (and of the general public), JaackMaate launched the Happy Hour podcast.

Despite the first episode only clocking in at 18 minutes, JaackMaate’s Happy Hour caught on like wildfire – and Jaack and his co-hosts have been cracking up the nation and beyond with their mad patter on everything from YouTube culture to fast food ever since.

My silly little podcast ?@JaacksHappyHour? is GOING ON TOUR.

Now, the hit podcast is coming on tour for the first time ever. Happy Hour Live – The Round Sheep Tour will be coming to the Bristol Hippodrome on Sunday the 12th of February, 2023.

Fans of the show can expect the return of familiar gags and characters like Martin the Guinea Pig Centipede, Creepy Library – and Mack Bean.

After the show, fans will be invited to ‘confess their sins’, followed by a Q&A with JaackMaate and the gang – so you can finally get a chance to ask why Jaack why he won’t stop mentioning he met Ricky Gervais.

This is the first ever tour of the smash-hit podcast, and so is sure to be special. Given the popularity of JaackMaate and his podcast, there surely can’t be any doubt that the tickets will sell out very quickly.

So, whether you’re a JaackMaate junkie, a Stevie White stan or a Robbie Knox rooter – get on these tickets. You can get them here – with pre-sale opening on Wednesday the 23rd, and general release opening on Friday the 25th.

Tickets on sale: Tickets for Disney’s The Lion King go on sale this week