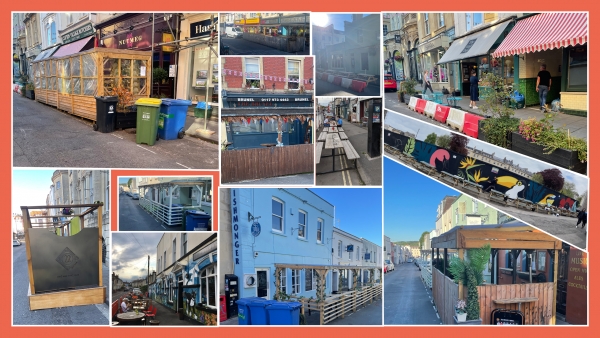 New campaign seeks to save Bristol venues’ outside spaces

After a devastating two years, Bristol’s hospitality industry is back on its feet and fighting, only to face a new crisis – but a new campaign is seeking to change that.

During the pandemic, venues across Bristol were encouraged to use outside space, and given strict guidelines on how much space could be between both customers and staff. Thus, regulations were shifted to allow increased outside seating.

Many venues took to this with aplomb, constructing beautiful decking or huts – and providing more than just a necessity for public health, but refreshing, enjoyable outside spaces for all customers.

This worked wonderfully for both businesses and customers, continuing to increase trade in a crucial time of recovery for hospitality venues in Bristol – and providing increased employment across the city as venues hired more staff to cover their increased space and foot traffic.

But now, the regulations allowing use of the road for hospitality are coming to an end.

As of October 2022, venues will no longer be allowed to use these spaces, forcing them to dismantle expensive decking, huts or fencing, and remove any outside seating.

As a result, venue capacity will be harmed, these venues will lose out on crucial business, and staff will have to be laid off; jeopardising both Bristol’s nighttime economy – and the people who run it.

But, a campaign is ongoing to save the hospitality industry in this time of crisis.

A petition has been launched to force Bristol City Council into using all their power to extend road usage and allow businesses to retain the structures already in place, along with word-of-mouth campaigning and ongoing solidarity and moral support.

The petition, which can be found here, is already at 2,221 of the 3,500 signatures it’s aiming for by noon this Friday – the number required for it to be discussed by the council next week.

It can often feel hopeless struggling against large changes like these – but the chance of real action is within grasp, so if you feel for the hospitality industry and want to do something, or even just enjoy outside spaces at your favourite venues, adding your signature could be a genuinely meaningful action.

Again, the petition can be found here – sign it before 12:00 this Friday to help take action, and save hospitality in Bristol.