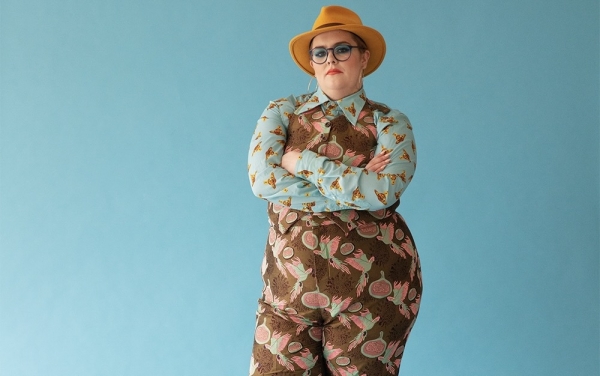 Adams has come a long way since her formative years in South Bristol.

Critically-acclaimed comedian Jayde Adams will be performing two stand-up shows in Bristol next month, returning to the Westcountry off the back of a slew of well-received performances and the success of her Amazon Prime special, 'Serious Black Jumper'.

With a handful of comedy awards and TV appearances under her belt, Adams will appear at Arnolfini on Tuesday 5 July as part of Bristol Pride’s Comedy Night before taking to the stage at The Hen & Chicken’s ‘Stand Up For The Weekend’ on Saturday 9.

Tickets for both shows can be found on the Arnolfini and Hen & Chicken websites.

They say “dress for the job you want” and I convinced people I was a serious stand up wearing a black turtleneck in my last show.

It’s 2022, I’m going full messiah. Oprah, Kanye, Russell Brand have all done it & I’m going to save all the men, with comedy https://t.co/hKFRr9tp7b pic.twitter.com/jfsTfmlKHT

Born and raised in Bedminster, Jayde Adams is a proud Bristolian and uncut gem; known for her brave, unflinching and outrageous material, she is quickly becoming one of the UK’s standout comics and has been described by British comedy legend Dawn French as “the third funniest woman in the world. Fact.”

Having attended Bristol Old Vic Young Company as a child, Adams burst onto the UK comedy scene in 2016 with her acclaimed Edinburgh Fringe show ‘Jayde 31’ which earned a nomination for the prestigious Best Newcomer award.

The Fringe has proved a fruitful home for Adams’ work; her 2019 show ‘The Ballad of Kylie Jenner’s Old Face’ proved a smash hit, eventually being filmed, and released worldwide on Amazon Prime as ‘Serious Black Jumper’. The special was nominated for an Emmy and has accrued well over 150 million views.

Adams has also become a regular on the small screen, starring in the BAFTA-winning BBC series Alma’s Not Normal, Neil Gaiman’s Good Omens (Amazon Prime) with David Tennant and Michael Sheen and playing a leading role in the upcoming Take That film, Greatest Days.

As well as appearing as a guest on a host of prominent TV shows, the observational comic has recently appeared in BBC One’s ‘My Hometown: Jayde Adams: Coming Home’. The documentary follows her difficult yet joyfully hilarious return to her home city and the family and friends that made her.

Now, on Saturday 9 July, Adams will return to Bedminster once again, appearing at the Hen & Chicken as part of their regular ‘Stand Up For The Weekend’ series.

Tickets for the show can be found here.

Adams will also be in Bristol on Tuesday 5 July for Arnolfini’s Bristol Pride Comedy Night. She will be playing host for the evening with a prestigious group of fellow comedians set to perform.

Tickets for the show as well as more information about the comedians taking part can be found on the Arnolfini website.