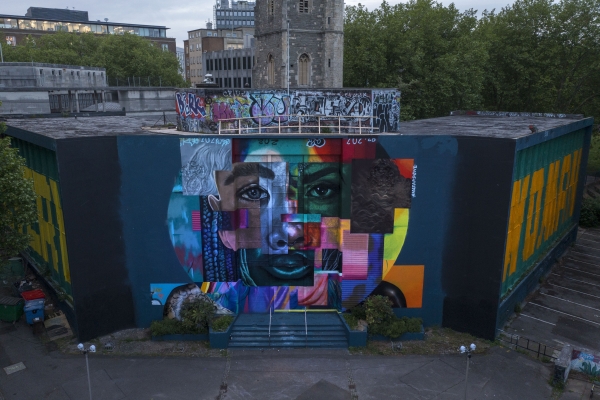 Two huge murals with glow-in-the-dark messaging have been installed in the heart of central Bristol this week, as part of an ongoing campaign to tackle harassment of women in the city's nightlife sector.

The murals - 'It's Not OK' by Emily Joy Rich and 'I'm Every Woman' by HazardOne and Oli T - can be found on the former Bank of England building on Castle Park.

Women deserve to feel safe in our city at night… so we have created a glow in the dark mural right in the heart of Bristol.

This UV piece by @emilyjoyrich reveals a hidden message at night.

The first of the two murals to be completed was Emily Joy Rich's 'It's Not OK', which features Bristol Nights' message that 'If it's unwanted, it's not OK'.

UV lighting reveals a collage of behaviours and experiences submitted by women in Bristol during the project's research phase, including groping, catcalling and staring.

The second mural, when lit by new UV lights at night, reveals that 97% of women in Bristol have experienced sexual harassment in a nightlife environment.

“By taking over an iconic building on the edge of Castle Park, the murals are a clear symbol of our city's stance against harassment but are also a physical representation of the action being taken to create safer areas for Bristol.

“We have included hidden glow-in-the-dark messages which bring the murals to life at night, to send a message at that critical time that if it’s not wanted, then it’s not OK.

“This part of the city has previously been highlighted as somewhere people wanted to feel safer, so this project brings the best of nightlife to a huge thoroughfare that connects one part of the city to the other.

“We’re inviting bystanders to call out unwanted behaviour, while empowering those working in the night-time economy to recognise and execute a zero-tolerance response to harassment in their venues and workplaces.

“It’s a big statement about how Bristol cares about everyone who has to access the night.”

Bristol Nights represents the city's night-time economy, which constitutes more than 30% of the jobs in Bristol working from 18:00-06:00.

To find out more about the Bristol Women's Safety Charter, or to follow news and updates about the ongoing campaign, head to the Bristol Nights website.