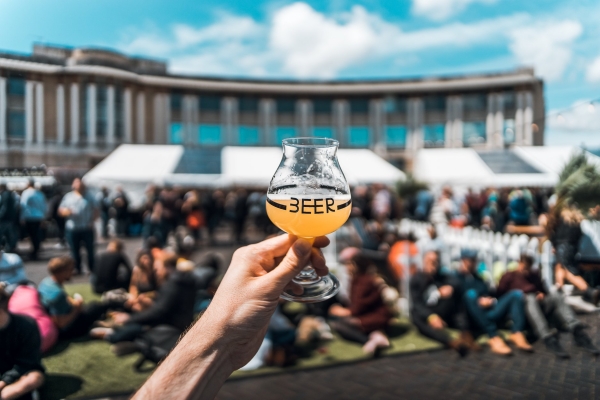 Sample some of the best tipples the Westcountry has to offer as the renowned festival makes a welcome return.

The 2022 Bristol Craft Beer Festival is just around the corner, inviting another cast of top-notch breweries to showcase the very best of their produce across two days on Friday 11 & Saturday 12 June.

Returning once again to Lloyds Amphitheatre, this year's festival promises to be one of the biggest and best yet, boasting more than forty brewers on-site as well as a range of food options, a stellar musical lineup and an unbeatable summer atmosphere.

At the time of writing, Friday, Saturday and full weekend tickets remain on sale, but they're in seriously short supply - find out more and get yours here to avoid missing out.

Dreaming of summer beers, Bristol? Us too.????

Who's joining us at BCBF this June?

Of course, being the Bristol Craft Beer Festival, organisers have pulled out all the stops to showcase the very best of the city's growing craft beer scene at their 2022 edition.

With just under a month to go until this year's festival gets underway, read on for a quick rundown of the brilliant Bristol breweries getting involved this time around...

What a weekend of great beer, delicious dishes and banging beats!

We want to say a massive thank you to everyone who came and made #BCBF21 the huge celebration it was.

Operating out of their HQ in Easton, Arbor have been brewing a diverse selection of beers in Bristol since early 2007.

The team currently brews and distributes more than 1.5 million pints per year, and can be found in pubs and bars up and down the country.

The brewery's extensive back catalogue of recipes covers a vast array of styles and ABV's, and while each variety is unique, all have been crafted to incredibly high standards of quality and taste. 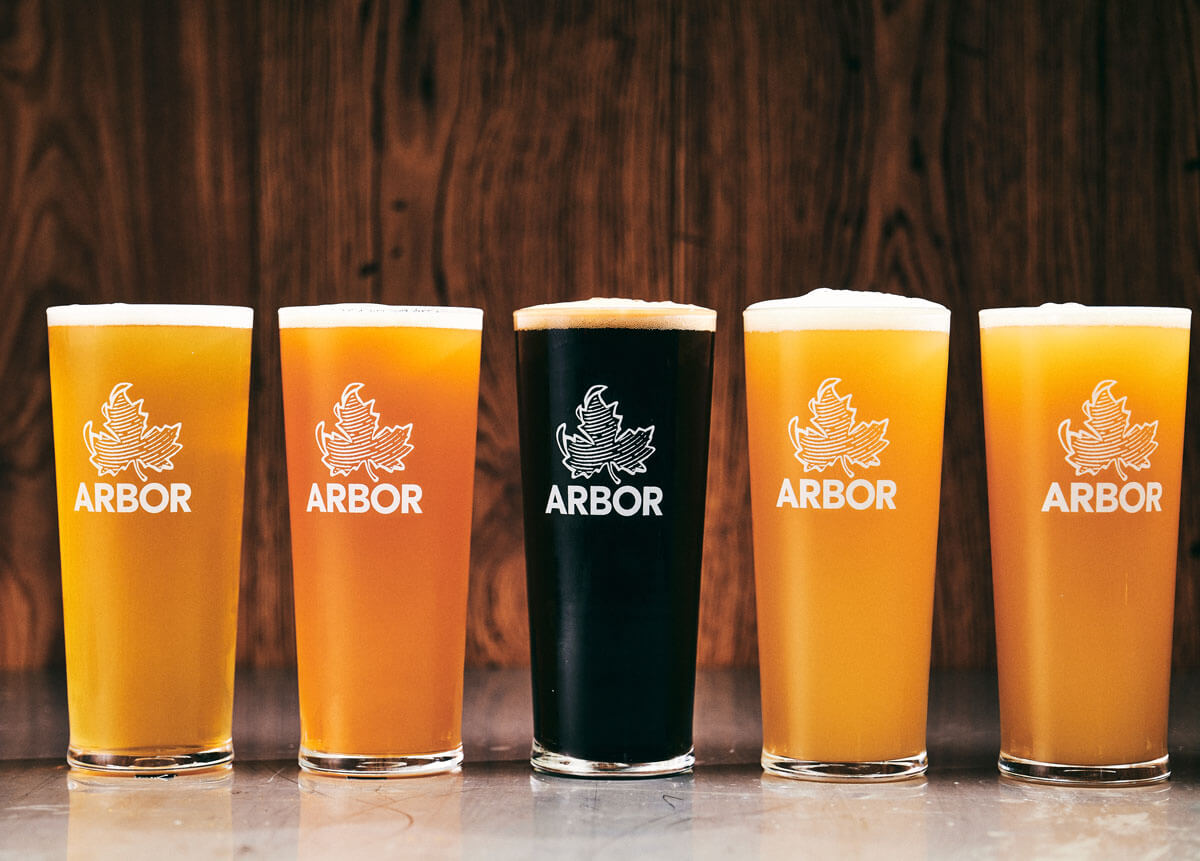 Bristol Beer Factory are up there with the city's most widely-known and best-loved brewers, their simple-yet-charming branding present in pubs and bars across the Westcountry and beyond.

From their Southville brewery, the team produce a constantly-evolving lineup of fresh and exciting varieties, offering up an impressive range of vegan-friendly beers to boot. 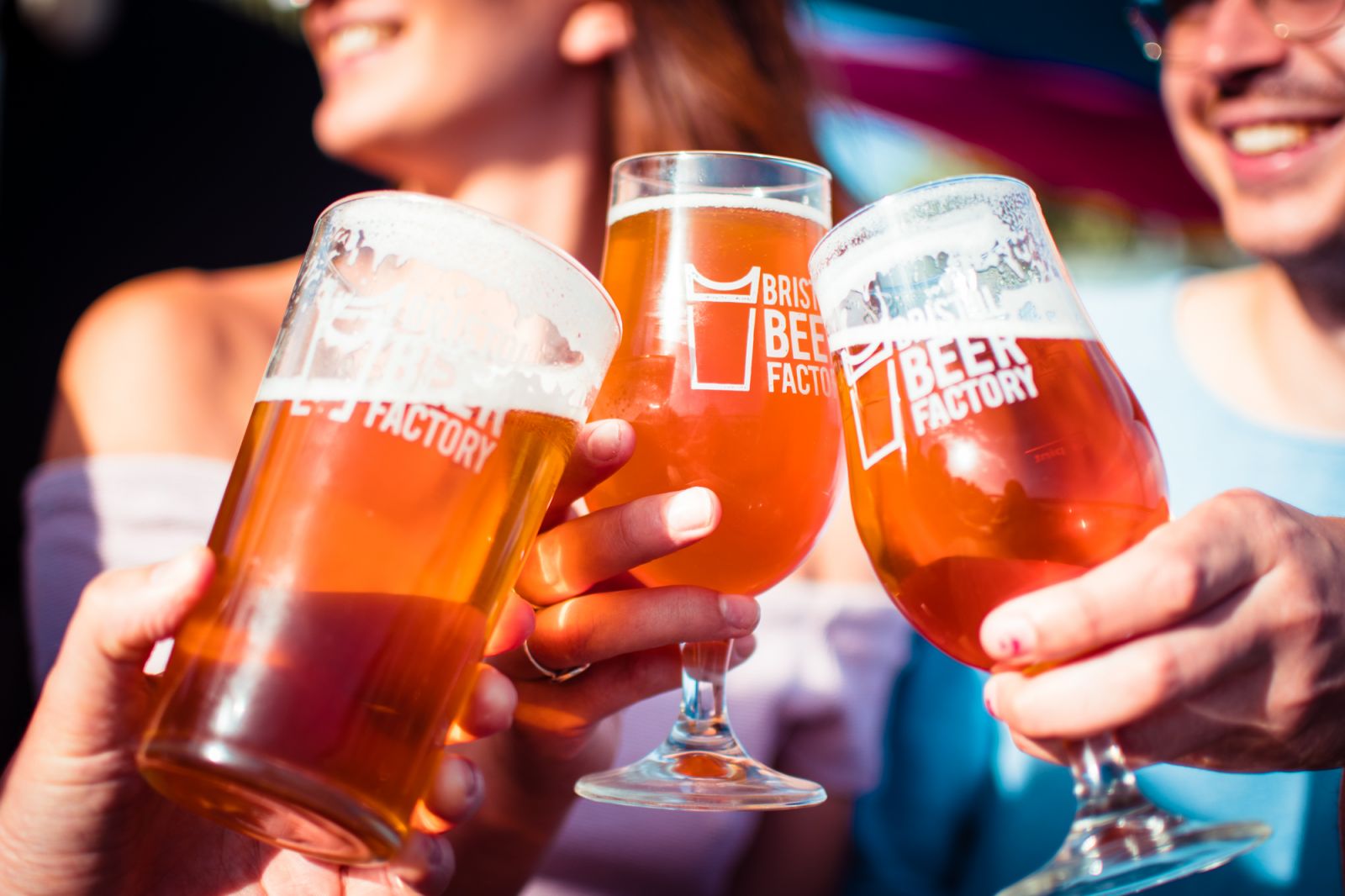 Not strictly Bristol locals but well worth keeping an eye out for at this year's Craft Beer Festival, Bath-based microbrewery Electric Bear have built a serious reputation for themselves since starting out in 2015.

Having each out as homebrewers before coming together to launch a brewery, the Electric Bear team is made up of passionate artisans, who are involved in every stage of the brewing process, from building their own equipment to taste-testing the merchandise.

In their own words, Electric Bear strive to create "great, innovative, delicious, modern beer that delivers on that 'glad to be alive' vibe" - currently stocking everything from traditional lagers and ales to experimental small-batch brews, it looks safe to say they're doing just that. 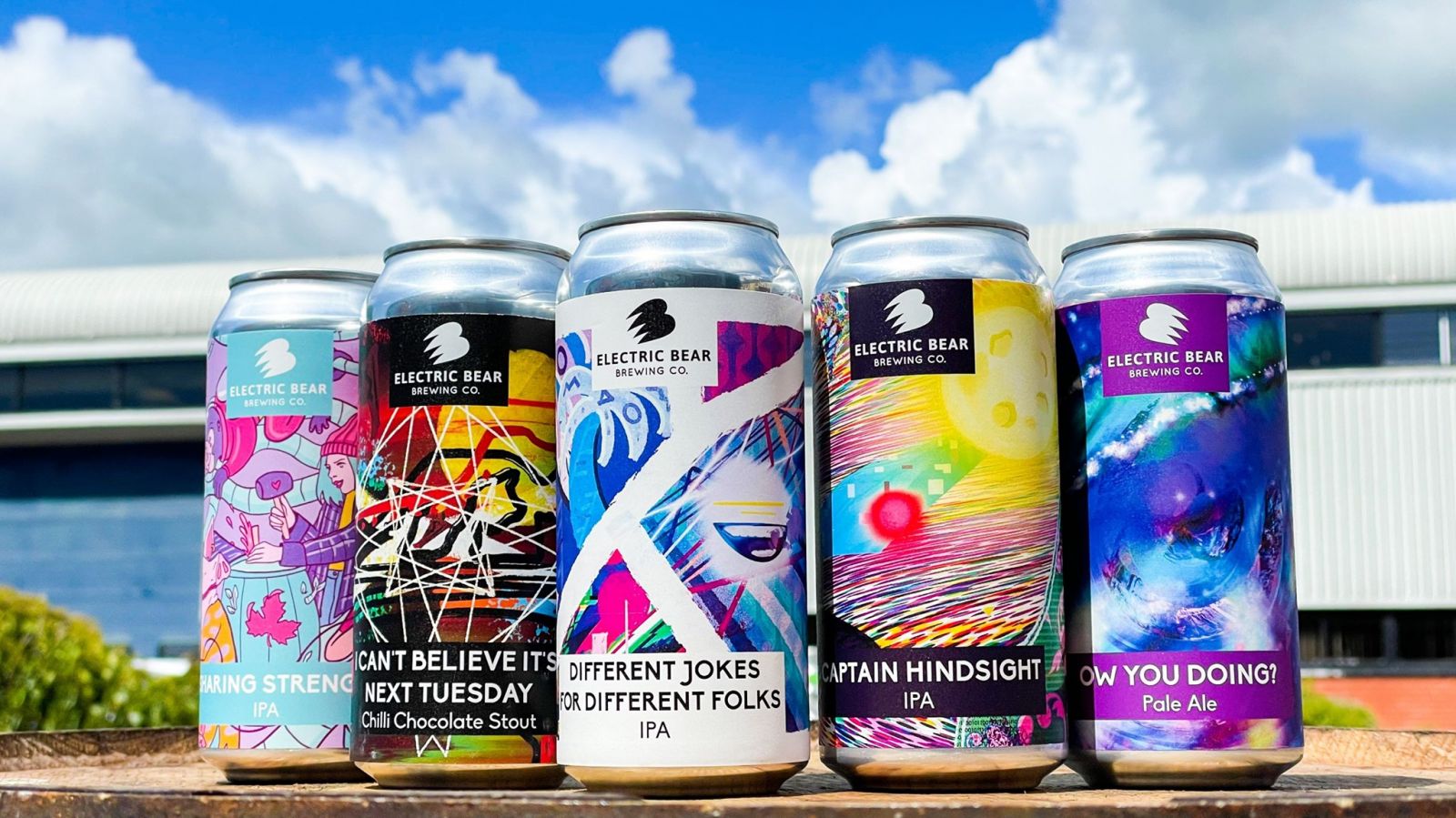 With roots firmly planted in Bristol, Left Handed Giant are a forward-thinking producer operating out of two sites, their main brewery in St Phillips and their one-of-a-kind brewpub at Finzels Reach.

Established in 2014 when owner Rich Poole struck a deal with Small Bar to stock his early creations, LHG have developed over the years into a household name in craft beer and an important part of the local hospitality community.

From an array of unique IPAs to an indulgent black cherry, chocolate & vanilla milk stout, raspberry & rhubarb fruited sour and much more, LHG's extensive range includes a beer for every mood. 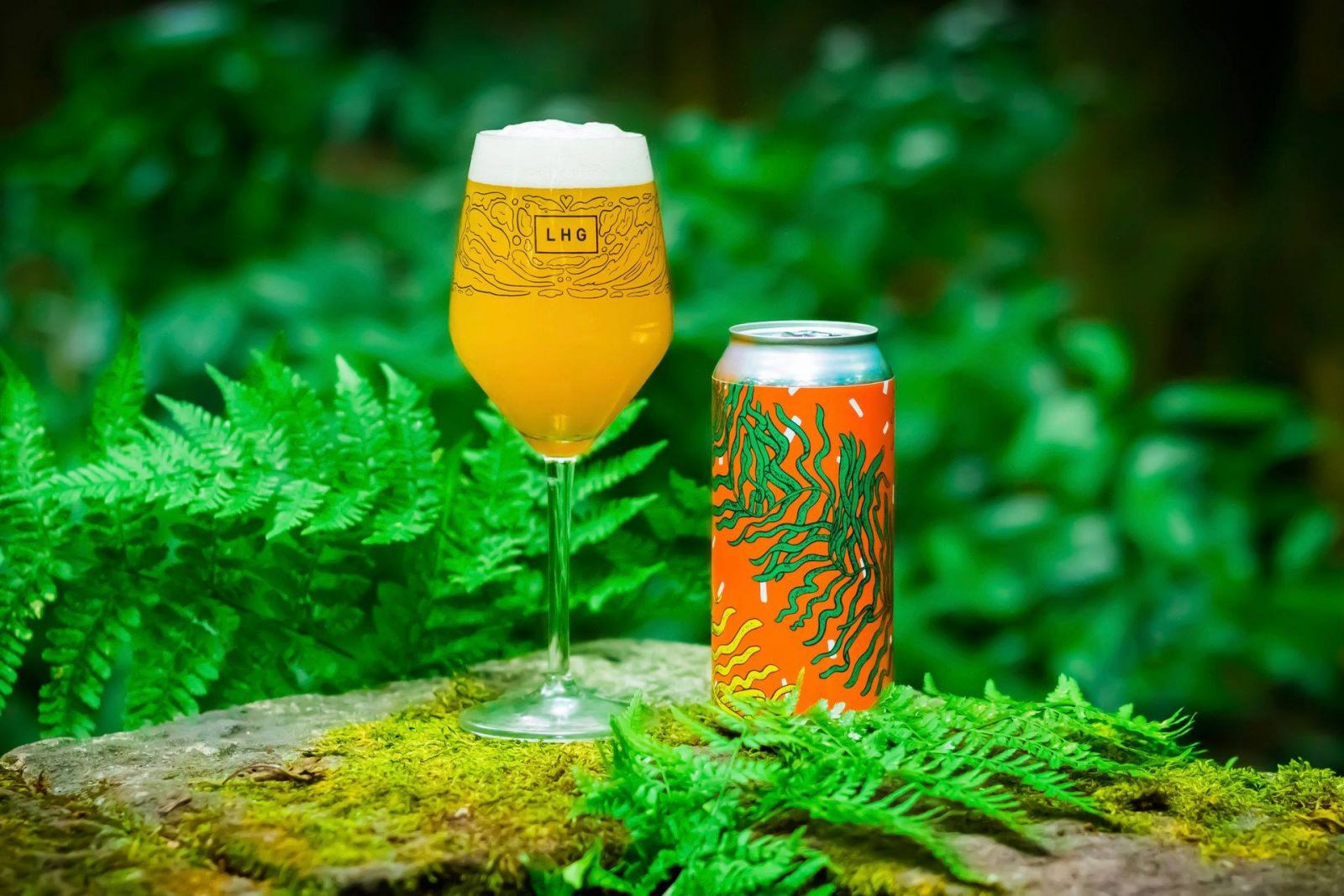 Established back in 2016, Lost and Grounded has emerged as one of Bristol's best-loved breweries, known for their passion for the precision and idiosyncrasies of German and Belgian beer.

All of their beers - from the popular Running With Sceptres Indian Pale Lager to the Sunset Conversation tropical sour - are unfiltered and 100% vegan.

The team proudly supply many of Bristol's top pubs and bars, and represent one of few UK breweries certified as a UK Living Wage employer. 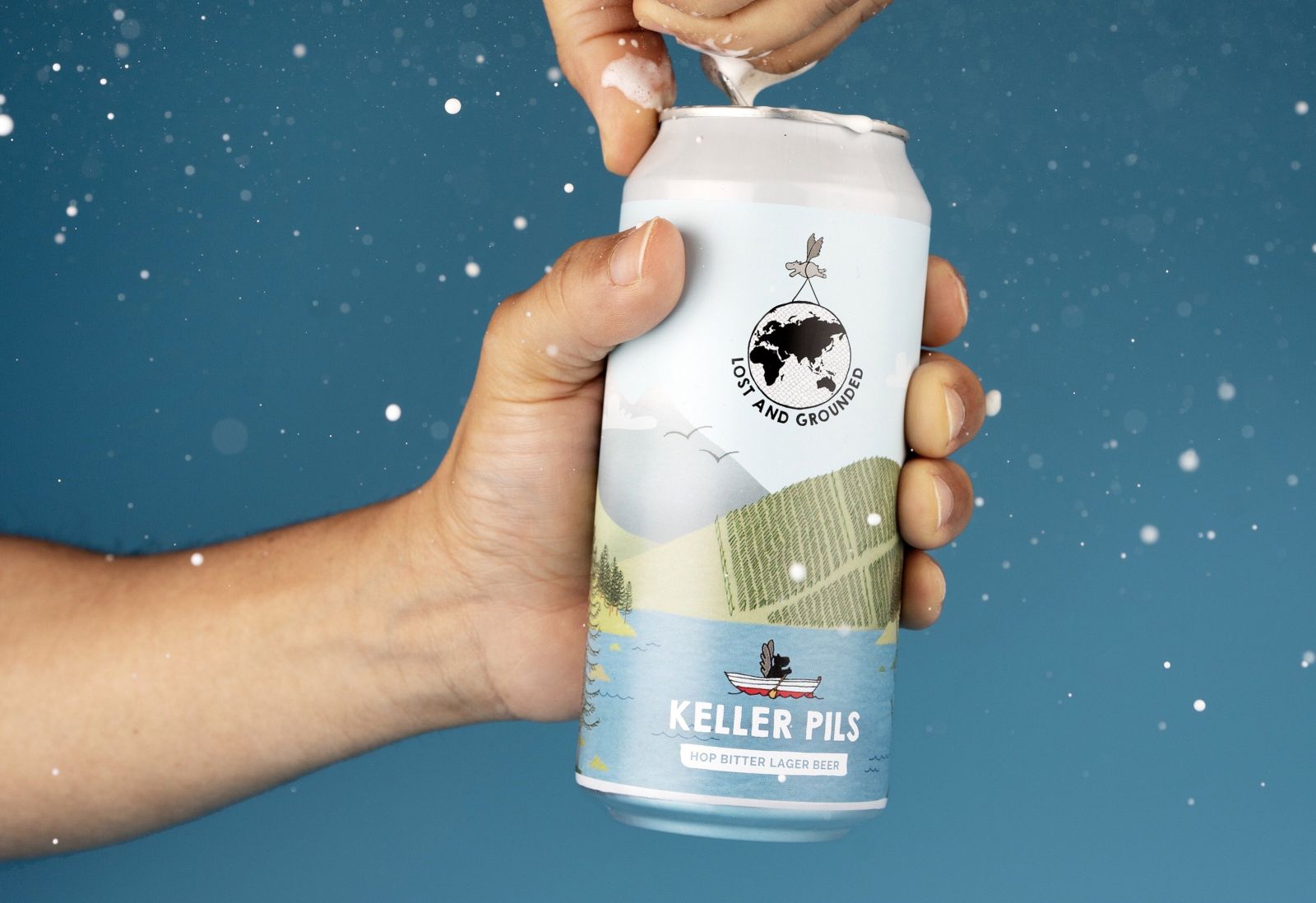 Having conquered the pub scene, emerged as a staple refreshment at major events and become a fixture on supermarket shelves nationwide, Moor Beer have hardly put a foot wrong since the business was bought and officially relaunched in Bristol in 2007.

Named after the Levels and Moors area of Somerset where the brewery originated, Moor Beer opened its first Tap Room in Bristol in 2014, later setting up shop on London's Bermondsey Beer Mile in 2018.

Natural carbonation and the use of live yeast are cornerstones of the Moor Beer brewing process, giving their full range a unique texture and a distinct, satisfying flavour profile.

Combining a traditional German approach with an American-style focus on flavour and the age-old British method of secondary fermentation, the team have produced an array of top-notch beers over the years.

Find Moor Beer at this year's Bristol Craft Beer Festival to sample one of the most diverse selections the city has to offer. 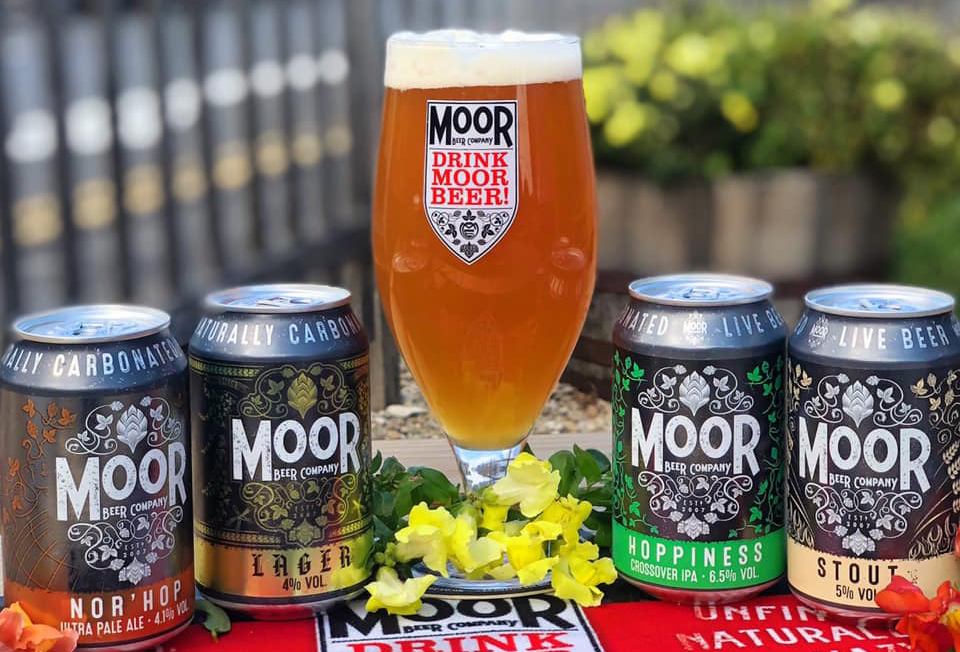 Channeling Bristol's leftfield spirit, New Bristol Brewery is owned by husband-and-wife team Noel and Maria, operating out of the heart of the city.

A family business at its core, the brewery does everything in small batches, putting emphasis on taking risks with new methods, new flavours and uncharted combinations.

If you're passionate about supporting local brewers, they don't come much more Bristol than this - be sure to keep an eye out for the gorilla in a space suit at this year's Craft Beer Festival. 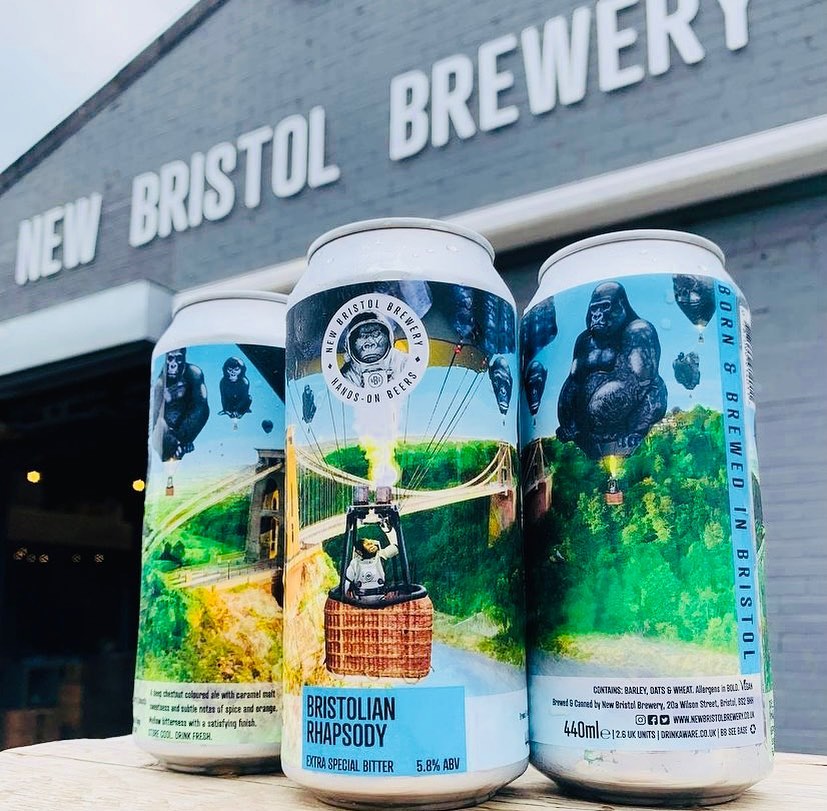 Born out of the unpredictability of the coronavirus pandemic, Newtown Park is an independently owned brewery, run by a group of friends who share a passion for excellent food, great drinks and good times.

Newtown are dedicated to creating modern, innovative and, above all, accessible beers, using cutting-edge techniques and a diverse range of ingredients to produce their impressively broad selection.

Alongside the classics - think IPAs, brown ale and the like - Newtown's repertoire boasts a Kveik farmhouse-style pale ale, a traditional American steam beer and a rich, bourbon barrel-aged imperial stout. 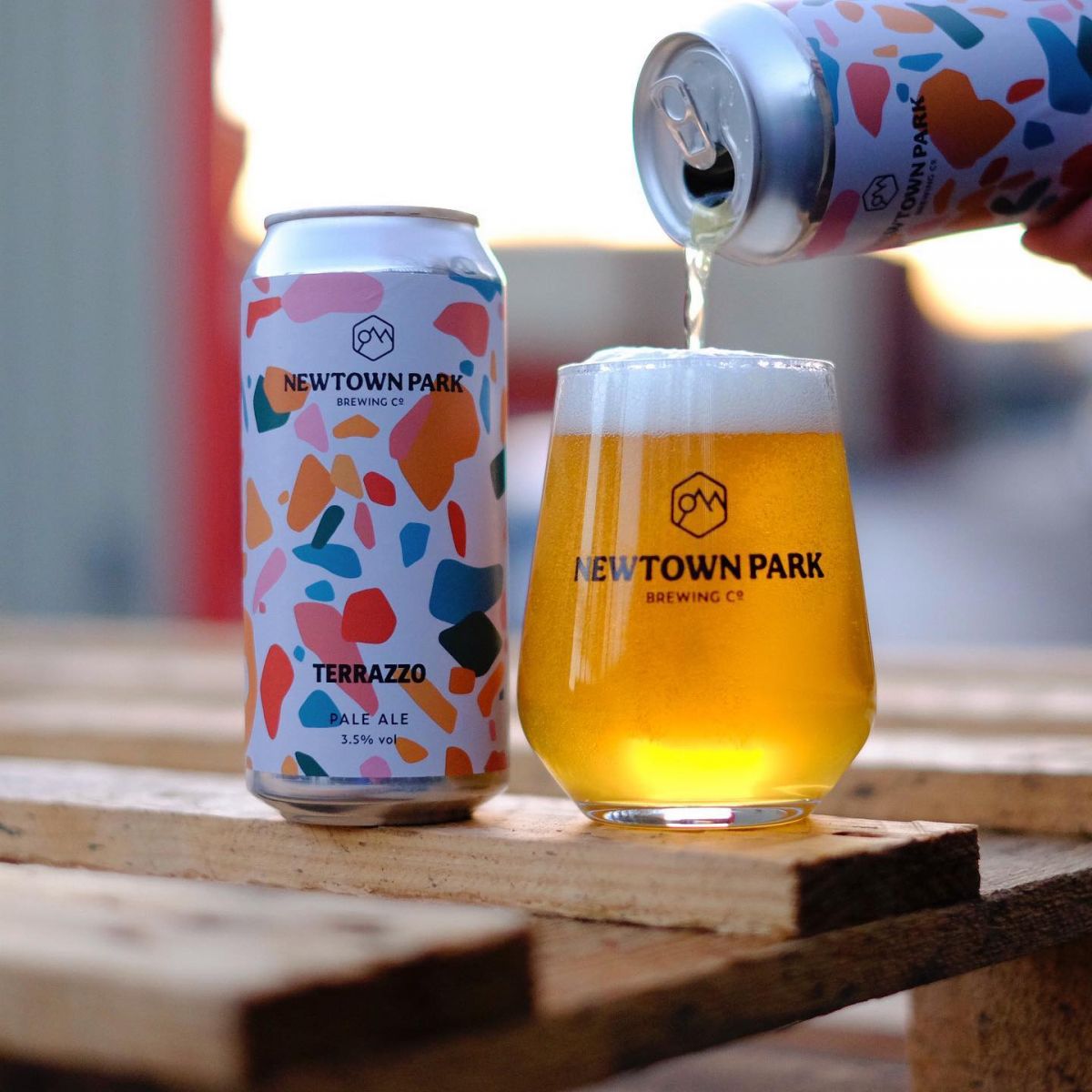 Renowned throughout the Westcountry and across the UK, Wild Beer Co have emerged as one of the nation's leading independent breweries in recent years.

Wild Beer celebrate traditional brewing techniques while embracing a sense of modernity in their products, with an emphasis on unique flavours and blends.

As well as their classic offerings, including the Bibble Pale Ale and Nebula Hazy IPA, Wild Beer are known for their creative varieties and innovative combination of ingredients.

Their rich Millionaire Stout, for example, features hints of salted caramel and chocolate, while the Japanese-inspired Yokai blends Yuzu citrus with umami and spice from Sichuan peppercorns.

Operating out of their HQ in Shepton Mallet, the team leave no stone unturned when experimenting with new flavours, leading to a seemingly endless collection that borrows from an array of global influences. 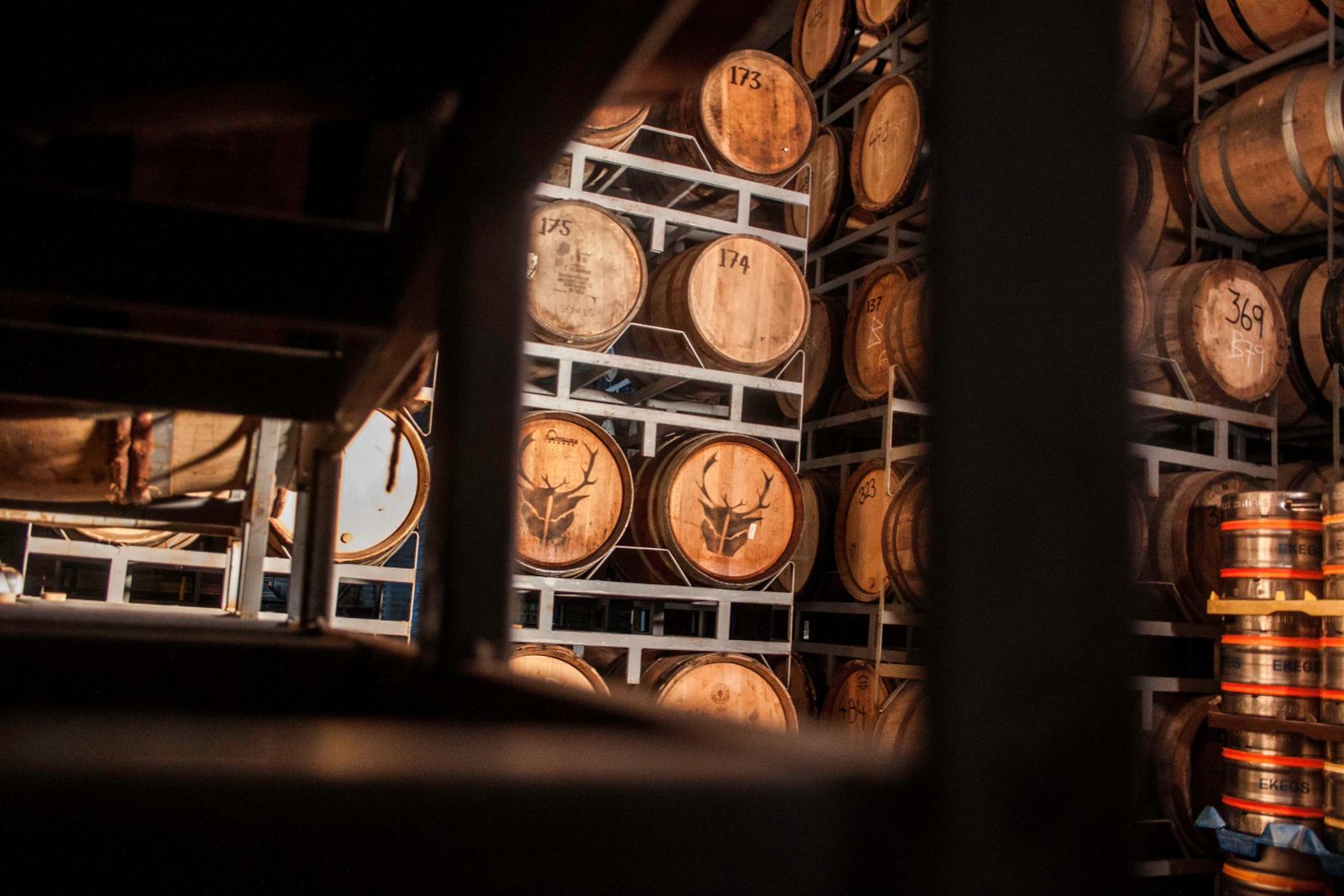 Having started out as a completely DIY home-brewing project based around tinkering, guesswork and a lot of early research, Wiper and True is a real example of a quality, independent brewery built from the ground up.

Founder Michael Wiper spent a long time in his early years as a brewer learning from like-minded people up and down the country, honing his craft through trial and error with the input of a wide range of artisan producers.

Wiper and True's first brewery opened in St Werburgh's in 2015, which is now one of two production sites in BS2. The other, opened just last year, is located just around the corner from their York Street HQ, on nearby Merstham Road.

The hard-working team at Wiper and True constantly refine and innovate their recipes, striving to deliver a perfect pour across their full range. 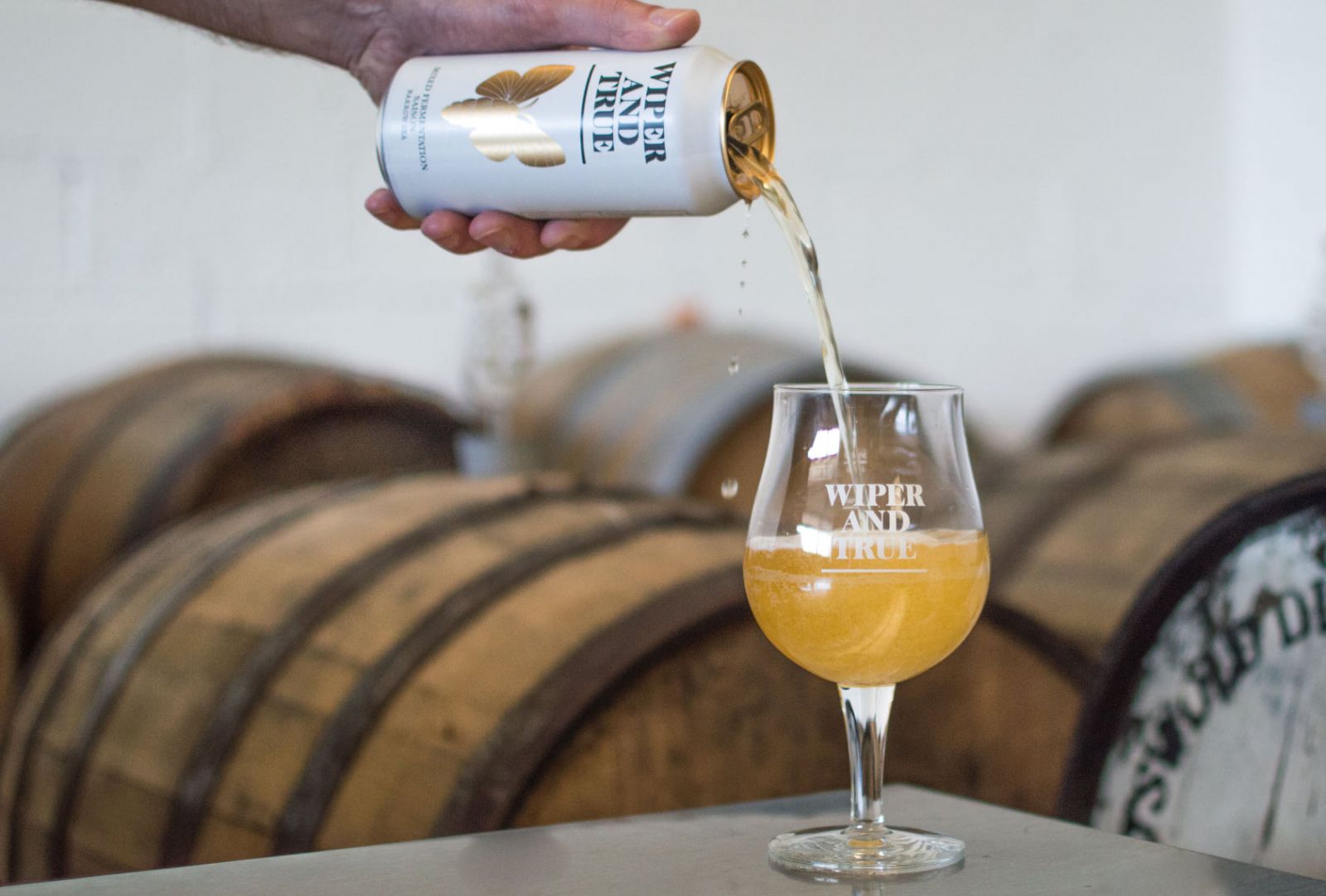 Alongside another blockbuster selection of craft beer, the 2022 BCBF will be hosting two guest chefs across two days, cooking over live-fire pits. They'll be joined by a handful of renowned local street food vendors serving up culinary treats throughout the event.

Tickets for this year's Bristol Craft Beer Festival are available to purchase either for individual sessions or the full weekend, and grant access to your choice of drinks on-site, as well as a festival glass to take home.

To find out more, to book your tickets or to follow news and updates during the buildup to the Bristol Craft Beer Festival, head to their website or find the team on Twitter.