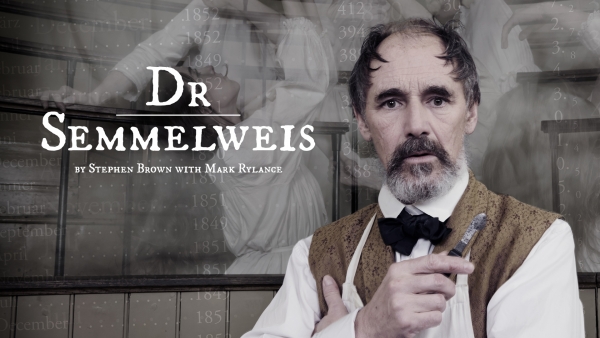 Dr Semmelweis will run from Thursday 20 January to Saturday 12 February 2022.

Recipient of multiple awards, including three Tony Awards for on-stage excellence, Rylance's latest production is based on the life of the outspoken Hungarian physician Ignaz Semmelweis, whose 19th-century discovery remains relevant in modern medicine.

The majority of performances are not socially distanced, however, there are a handful of shows that will be. There will also be a number of signed, captioned and audio-described performances, so be sure to check show descriptions carefully. Find tickets here.

The Dr Semmelweis team are officially in the building! WOO!

This powerful show charting the life of a maverick doctor opens 2 weeks today.

Check out our lovely cast, led by 'the most exciting stage actor of his generation': Mark Rylance!

Set in 19th century Vienna, the production follows Semmelweis’ battle to convince the medical establishment of the merit of his life-saving discovery, one which would prevent hundreds of thousands of new mothers from dying at a time when Childbed Fever was tearing through maternity wards.

At every turn, Semmelweis encounters doubt and rejection from his peers, eventually leading him to question his own sanity.

After years of fighting to prove his theory, the ghosts of the women he failed to save return to haunt him, leaving Semmelweis to answer the questions: Is it too late to convince the medical establishment to see the truth? And if he tries what will be the cost?

Rylance, who co-wrote the production, was previously artistic director of Shakespeare's Globe in London and has appeared in shows on the West End and Broadway.

For his work in Jeruselum (2011), he was awarded both a Tony Award and an Olivier Award for best actor and has garnered a reputation as one of the finest performers in a generation.