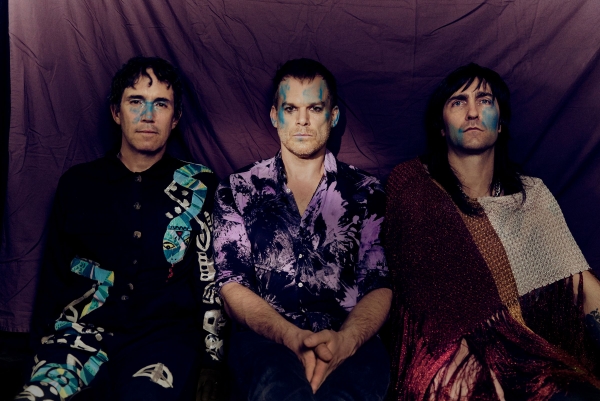 Alternative super group, Princess Goes to the Butterfly Museum will be in town on 27 November 2021 as part of an intimate UK and Ireland tour.

Tickets for the gig can be purchased from the event page.

Made up of Hall (Dexter, Six Feet Under, Lazarus), drummer Peter Yanowitz (The Wallflowers, Morningwood) and keyboardist Matt Katz-Bohen (Blondie), the band will be bringing their recent album Thanks for Coming to the live stage for the first time.

The Avant-indie band formed due to a shared love of musical experimentation; the trio have created a world within their music – the imaginary ‘Butterfly Museum’.

Their songs move fluidly between genres with their synthesizer-and-drum sound drawing comparisons to David Bowie as well as 80s new wave dance music.

As well as being an Emmy nominated and Golden Globe winner, Michael C. Hall is an accomplished musical talent and an experienced Broadway performer with leading roles in Chicago, Cabaret, Headwig and the Angry Inch and was handpicked by Bowie to star in his musical, Lazarus.

Bandmates Peter Yanowitz and Matt Katz-Bohen bring an impressive roster of musical experience to the project.

Yanowitz, as well as his involvement in The Wallflowers and Morningwood, has worked with the likes of Yoko Ono, Allen Ginsberg and Billy Bragg. Keyboardist Katz-Bohen has spent the last decade with Blondie as well as work with Boy George.

The album, Thanks for Coming, was released this year to rave reviews. The album, having been written in the midst of the COVID pandemic, incorporates clear dystopian themes built on top of eerie synth sounds and melodic drumbeats.

The band’s upcoming tour of the album begins in Bristol on 27 November before the band travel to venues in: Nottingham, Manchester, London, Bedford, Birmingham, Swansea, Glasgow, Belfast, Dublin and Liverpool.

Princess Goes to the Butterfly Museum’s shows are known for their epic, theatrical live shows and November’s trip to Thekla will be no different.

For more information about the band and their upcoming tour, head to their website.

To find out what is coming up at Thekla, visit their live page.