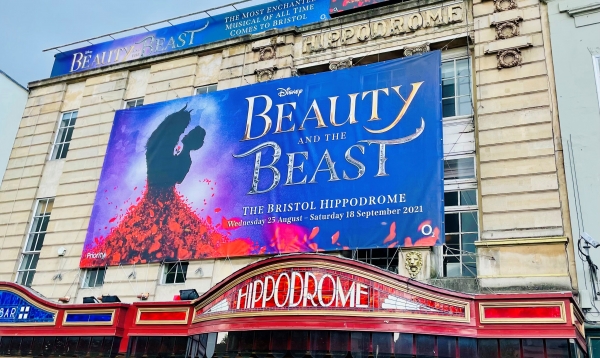 Beauty and the Beast returning to the Bristol Hippodrome in August

Tickets are on sale now for the breathtaking production of a beloved Disney classic.

A re-imagined and re-designed production of the Olivier Award-winning Beauty and the Beast is coming to the Bristol Hippodrome this summer, staged by the show's original creative team as part of an eagerly-awaited UK tour.

Boasting spectacular stage and character designs using the latest innovations in theatrical production, the timeless romantic tale will be brought to life in Bristol from Wednesday 25 August to Saturday 18 September.

Forced to remain closed for the entirety of the coronavirus pandemic, the Hippodrome team are currently working towards an official reopening date of Saturday 26 June, preparing to welcome their first live audiences in well over a year.

We felt like getting a bit dressed up. How do we look Bristol?
'Be Our Guest' from 25 August as the most enchanted musical of all returns to our stage.https://t.co/ZdbdkOKWlq pic.twitter.com/OcEOHMee6d

Featuring Alan Menken's iconic soundtrack that includes classics like 'Be Our Guest' and 'Beauty and the Beast', the show is a truly unique theatrical experience, and an absolute must for any fans of the original Disney film.

The structure and tone of the story and score made Beauty and the Beast an instant hit upon its 1991 cinematic debut, making Disney history as one of the company's first films to present its narrative in the form of a stage musical.

After the original film became the first animated film ever nominated for an Oscar for Best Picture, Beauty and the Beast opened on Broadway in April 1994, earning nine Tony nominations and winning one.

After 13 consecutive years on stage, the production remains among the top ten longest-running shows in Broadway history. Its West End production, which debuted in 1997, has been performed to more than two million people to date.

Tickets for Beauty and the Beast at the Bristol Hippodrome, showing from 25 August - 18 September, are on sale now and can be found here.

For more information, or to see what else is coming up this summer, head to the Bristol Hippodrome website.