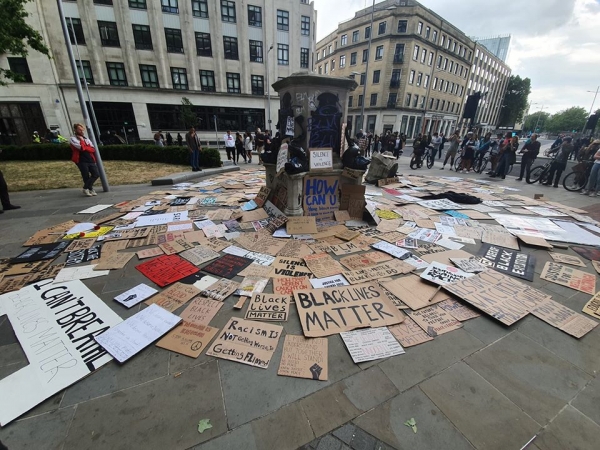 Signs placed around the former site of the toppled Edward Colston statue will be preserved and put on display in Bristol.

Bristol City Council have confirmed that placards and signs from yesterday's (Sunday 7 June) historic Black Lives Matter protest have been collected from Colston Avenue, set to be preserved for display at the M Shed.

Dozens of signs were laid around the former site of a statue commemorating 17th-century slave trader Edward Colston, after the monument was toppled and subsequently pushed into Bristol Harbour by protesters.

Moving to see people quietly reading all the messages laid out at the empty Colston statue plinth. May this be a moment in time we can all look back on as the start of real long term change and action. Proud to call Bristol home today. #BlackLivesMatter pic.twitter.com/ygtTOO6rV1

Following a memorable day in Bristol that saw an estimated 10,000 people gather in the city centre to protest police brutality and racial inequality, social media platforms have been inundated with coverage of the statue's removal.

In what was a significant moment for Bristol after years of debate around whether or not the statue should be taken down or relocated, footage shows protesters looping rope around Colston's neck before pulling the monument to the ground.

Speakers and activists then used the platform to rally crowds, with those in attendance opting to leave placards and signs behind.

Edward Colston statue pulled down by BLM protesters in Bristol. Colston was a 17th century slave trader who has numerous landmarks named after him in Bristol. #BlackLivesMattters #blmbristol #ukprotests pic.twitter.com/JEwk3qKJx2

Videos and images of the event have been shared around the world, with debate raging online as to whether or not a statue commemorating a key figure in Bristol's slave-trading past should have been taken down or left standing.

Mayor Marvin Rees released a full statement yesterday evening, acknowledging that the removal of the Colston statue "will divide opinion," while calling for unity among Bristolians moving forward.

"It's important to listen to those who found the statue an affront to humanity and make the legacy of today about the future of our city, tackling racism and inequality," he said.

"I call on everyone to challenge racism and inequality in every corner of our city and wherever we see it.”

The Mayor has since announced that the statue will likely be retrieved from the harbour and moved to a Bristol museum, but that it "isn't a priority" right now.

Organised as part of worldwide protests in the response of the killing of George Floyd by a white police officer in the US, yesterday's demonstration saw thousands of Bristolians take to the streets to march from College Green to Castle Park.

Speakers addressed the crowds throughout the day, with a symbolic eight-minute silence observed on College Green before the march in memory of black lives taken by police in the US and the UK.

Avon and Somerset Police have issued a statement commending people who took part in the peaceful protest, noting that there were "no instances of disorder" and that no arrests were made on the day.

"The vast majority of those who came to voice their concerns about racial inequality and injustice did so peacefully and respectfully," said Superintendent Andy Bennett.

"And I’d like to thank the organisers for their efforts to encourage demonstrators to follow Government guidance – a message which many clearly took on board, doing their best to socially distance despite the large crowds."

For more information and updates on the proposed exhibition using signs from yesterday's Black Lives Matter protest, head to the M Shed Facebook page or follow them on Twitter.