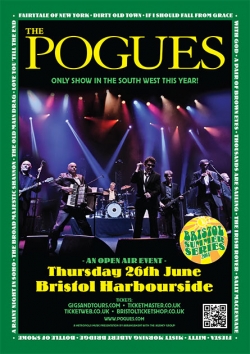 The Pogues : anarchy, bawdiness, melancholy romance and plenty of whiskey which infuse the majority of the band's oeuvre, an Irish pub band punched with infectious rhythm, guts and glory to the accompaniment of mandolin, accordion and tin whistle.

The weather may have been a tad on the damp side, but that certainly didn't impede the enjoyment of the capacity crowd for The Pogues' barnstorming performance at Lloyds Amphitheatre.

Shane MacGowan – unquestionably one of the music industry's most notorious hellraisers – on occasion only just barely seemed able to stand, clutching on to and swaying around his microphone and slurring his words amidst many enthusiastic gulps of an ever-present pint.

Let's be perfectly honest though, his voice has never been a finely-tuned instrument of mellifluous beauty, but it roughness and robustness added a rowdy, rugged drunken vigour to proceedings.

Nevertheless, its anarchy, bawdiness, melancholy romance and plenty of whiskey which infuse the majority of the band's oeuvre, an Irish pub band punched with infectious rhythm, guts and glory to the accompaniment of mandolin, accordion and tin whistle.

MacGowan took it in turns to sing the songs and his voice flagged more often than not (in fact, there were several times it seemed he'd forgotten the lyrics altogether and slurred together a string of dissonant growls), but it didn't matter one jot to the audience, most of them equally well-lubricated.

The iconic frontman was well supported by the band, who took over while he disappeared backstage intermittently and a few times translated his incomprehensible, wobbly declamations, as they belted their way through a fair portion of their Rum, Sodomy and Lash album and some of their greatest hits.

As the darkness descended and the crowd became whipped up into an at-times apoplectic dancing frenzy, the Amphitheatre provided the perfect backdrop for the band's well-known songs and infectious on-stage shenanigans.

Any other band would have fired him years ago, but The Pogues just isn't The Pogues without MacGowan, revered by the baying, cheering crowd, as he staggered around, dressed in black and with ghostly pale complexion, a living, breathing miracle that the Grim Reaper has kept his bony clutches away for the best part of 30 years.

'Dirty Old Town', Euan MacColl's caustic tribute to Salford's factories, kicked off the encore, and the lively crowd jostled and drank and threw pints in the air with enthusiastically reckless energy.

A surprisingly heartfelt A Rainy Night in Soho preceded two rousing finales in the form of the toe-tappingly bawdy 'The Irish Rover' and 'Fiesta'.

But the fact MacGowan couldn't remember half the words made absolutely not a jot of difference.  The capacity crowd knew them and they belted them out as loudly as they could, and they revelled in the magic of a band whose music will forever lift the spirits and raise plenty of hell.

MacGowan and The Pogues will forever endure.