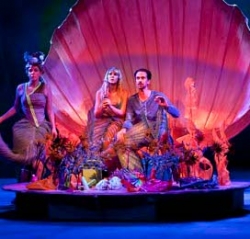 Steve Kelly and family at the Bristol Old Vic.

This is a modern telling of Hans Christian Anderson's timeless masterpiece that still possesses all of the magic and charm of the original. The tale of the Little Mermaid's pursuit of love awakens the imagination, touches the soul and pulls at the heart strings. Some of the modern twists include rapping and beat boxing but don’t let the thought of this put you off as it these fit in seamlessly with the more tradition aspects of the show.

Catastrophe will befall the kingdom “up there” if the young Prince Will does not fall in love by his eighteenth birthday. This leads him upon an unsuccessful ocean voyage to find a suitable partner during which he falls overboard and sinks down into the murky depths of the sea. The LittLle Mermaid rescues the somewhat gormless Prince, and afterwards her desire to meet “who mans” and follow her heart leads her to trade her angelic voice to the Seawitch for the opportunity to become human. The Seawitch has other plans however, and uses her newly acquired singing ability to trick the prince into marrying her instead so she can become the “queen of everything”.

The simple but effective set had a few minor hiccups but overall transported the audience to a childhood place of fun and adventure. The script was original and littered with humour and endearing characters which captured the audience. One of the many impressive performances was that of the Seawitch, played by Beverly Rudd, whose costume, make-up and hair were as loud as her voice was rich. She was well supported by her two 'henchmen' the crab and the eel, bringing a light-hearted, comedy element to the show.

The show ebbed and flowed a little between some of the raucous numbers and the more thoughtful moments which may not suit all of the younger audience members if they are expecting more of a pantomime setting.

Katie Moore's portrayal of the little mermaid was refreshing and appealed to children as well as adults, as she sang of her hopes and ever lasting love of the prince. She was ably supported in her swimming around the stage by a team in blue against a blue backdrop portraying the deep ocean waves. Initially this felt a little odd but as the story unfolded you became less aware of the 'supporters' and actually felt that the little mermaid was swimming freely, her tail swishing softly through the ocean waves.

The show has an interesting and varied musical score, with on stage musicians playing violin, mandolin and accordions, supporting the songs and the singing voices of the cast. The characters interacted with the audience from the stage and performed amongst them when the stalls became the sea in the finale.

The show was success and left us all glowing a little inside and still believing in fairy tales.

The Little Mermaid will be appearing at The Bristol Old Vic until 18 January 2014.