Review: GRID for Xbox One

'I don't often play games within this genre; however, I found myself clocking hours into this game.’ Sam Coles reviews GRID for Xbox One.

Racing games are somewhat of a low key-love for me. Not that I don't like them; it's just that they are not my primary genre of choice. However, when a game puts you behind a powerful machine that can do up to 200 miles per hour, there is no other feeling like it. GRID very much fulfils that car power fantasy, as you feel every gear shift, every drop of rain and the vibration of tyres as you screech around a corner. Is it one of the best racing games of this year? Let's find out!

There's no story to talk about, really, as this is a racing game. The gameplay does most of the talking, so let's jump into it. You have a main career mode which serves for most of the content for solo players, and you do have a lot of events to get through. Each season lets you control various cars; this can vary from Touring, Muscle, F1 and even Mini Coopers. It keeps things interesting, and it never gets boring, considering one might think that a racing game would get repetitive. With each section you finish, you gain a token to enter a showdown. What this entails is a high-end competition against veteran drivers, which become exceedingly challenging - a true test one's skills! 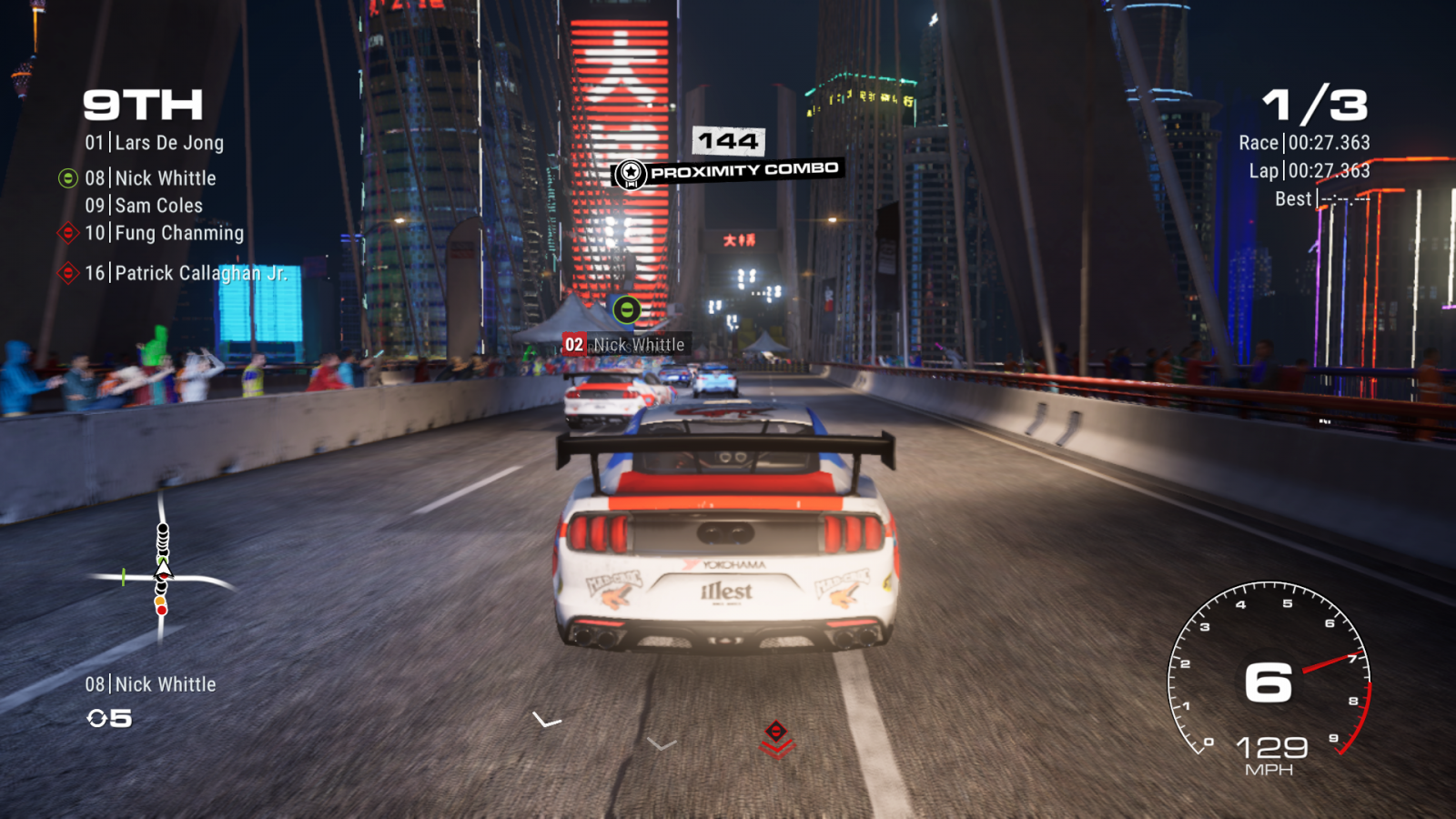 Driving itself feels great. It took me a while to get used to it as I'm more familiar with arcade racers. However, once I got to grips with the controls, it is as smooth as butter when you slide around a corner with a perfect drift, as the rubber of your tyres burn coupled with a squeal as the car does a wheel spin. The other drivers in the single-player actually put up a good fight; I found it quite tough to get first place in a lot of races as my opponents would be nipping at my heels up to the finish line.

This ties neatly into how the other drivers behave on the track. For example, if you trade paint with them regularly, they will become your rival. What this entails is that once they start to hold a grudge against you, they will actively try to crash into you when you are near. This really surprised me. It added a new dynamic to races and would knock me back down a few places when my rivals would spin me out. This adds an extra layer of challenge as it makes you think, which in tandem encourages you to race cleanly because aggressive play is met with hostility. It keeps races interesting because you can't just act like a thug on the track as you will be dealt with one way or another, so it gives you a reason to get better at the game. 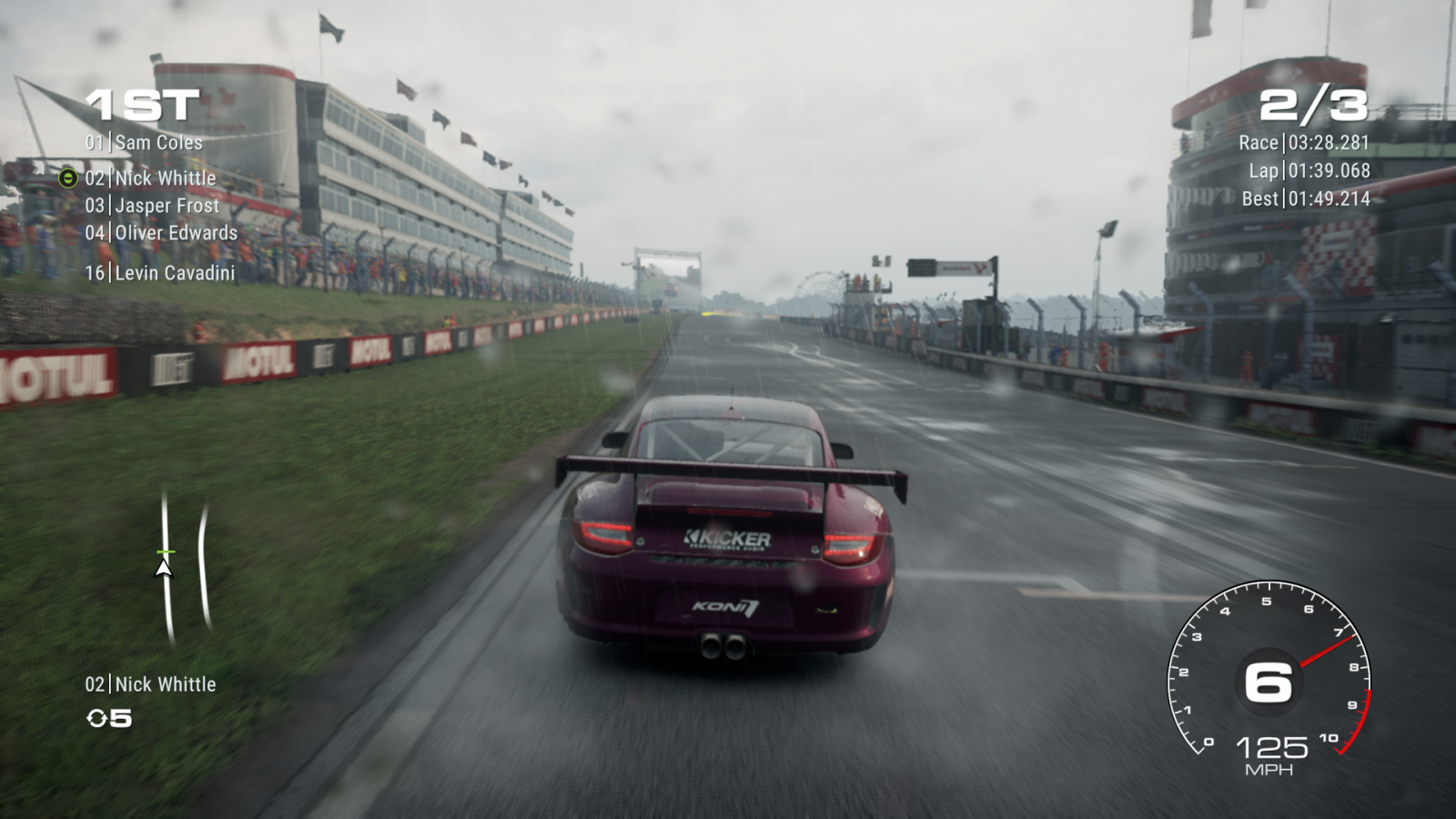 Visually the game looks fantastic. Each car has exquisite detail from the shimmer of the wheels to the detailed interiors when you are in first person and the metal bending as you crash into a wall. Codemasters have done a fantastic job modelling each car accurately, and it gave me an incentive to try out each vehicle just to see the stunning detail. The weather effects also need a special mention,  especially the rain. When it rains in this game, combined with the darkness of the night, it looks beautiful. Water will shoot up from under your wheel arches, and it will cause visibility problems. It just looks amazing as it slides off the top of cars. Not only that, but the warm glow of the sun as it rises on the track lets you know that the day is ready for burning rubber!

GRID is a stunning reboot of the racing series of yesterday. I don't often play games within this genre; however, I found myself clocking hours into this game. It has beautiful visuals, sound design and controls that feel really good as you throw a car around a corner at speeds over 100 miles per hour. It is a game that I would highly recommend to any petrol head or just gamers who are looking for a change of pace.