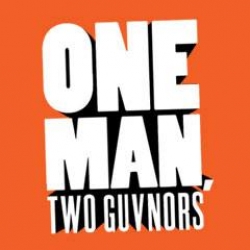 I'd be amazed if I saw anything else as massively enjoyable, deliriously ridiculous, fun and funny this year. It's risque, louche, ball-bustingly funny, refreshingly cheeky, and the encapsulation of British slapstick at its best. 5/5.

OK, first thing's first. One Man, Two Guvnors is an absolute hoot. It's a mad-cap mish-mash of bawdy humour, slapstick fun, anarchic horseplay, seaside postcard sassiness, and gloriously un-PC dialogue. And it's a riot from start to finish.

This award-winning, National Theatre comedy has landed in Bristol as part of its biggest-ever tour of the UK and Ireland. It's been seen by over 1 million people across the globe, and truly is an unrestrained, deliciously chaotic celebration of the best of British comedy. It's a rib-tickling combination of the Carry On films, mixed with elements of Fawlty Towers, Monty Python and Absolutely Fabulous.

Amidst all the verbosity and boisterousness, the crux of the story is about Francis Henshall who, fired from his skiffle band, inadvertently becomes the minder to Roscoe Crabbe. Roscoe, however, is really Rachel, posing as her own dead brother – who himself was killed by her boyfriend Stanley Stubbers.

Penniless and in need of 'a good plate of chips and mushy peas', Francis is quick off the mark to exploit the possibility of an extra job and a potentially lucrative opportunity and takes a job with Stanley Stubbers. The problem? He has to keep his two guvnors apart and prevent getting caught out. Got it?

Richard Bean's adaption of Carlo Goldini's comic classic The Servant and Two Masters, is a delightful take on the text, transferring the action to sleazy 1963 Brighton. (Keith Waterhouse once famously said it looked like the kind of place that looked as if it was about to help the police with their enquiries.)

Director Nicholas Hytner skilfully orchestrates the raucous proceedings. In fact, part of the directorial trick here is to present the illusion of unbridled disorder and anarchy when in fact it all fits within a very disciplined structure.

Gavin Spokes is absolutely fantastic as Francis (played by James Cordon during its debut run), engaging the crowd in the occasionally pantomime atmosphere and inviting two (reluctant) members of the audience onstage to help him move a trunk.

And during a monologue about how hungry he is, someone from the first few rows offered him some sandwiches. Hummus sandwiches. Spokes declined ("No wonder you haven't eaten them," he deadpanned.)

Spokes kept the spirit of spontaneity fresh and zinging along at a cracking pace, bouncing between the two masters with aplomb.

And in a protracted but gut-bustingly funny scene in a pub restaurant, Michael Dylan gives what has to be the supporting performance of the year as doddering, arthritic octogenarian waiter, Alfie, who repeatedly gets knocked about, whacked with a baseball bat, slammed into doors, shakily carries a soup tureen, and contorts his rubbery body when his pacemaker is set at the wrong speed.

In fact, the whole cast is excellent, playing out Bean's ebullient script to maximum effect and timing everything to perfection. Patrick Warner as Stanley Stubbers, the posh twit, is also a blast, nabbing some of the funniest lines in the show ("I'm so hungry I could eat my own pants", "I bunked off physics, spent every lesson in the radiation cupboard trying to make my penis glow.")

It's a farce, a fantastic blend of British theatre, tightly-written but with a refreshing openness and spontaneity about it – a visual and verbal tour de force.

Between the set changes we also get some excellent 60s, Buddy Holly-style riffs from the superb skiffle band The Craze, who also warm up the audience before the show and during the interval.

I'd be amazed if I saw anything else as massively enjoyable, deliriously ridiculous, fun and funny this year. It's risque, louche, ball-bustingly funny, refreshingly cheeky, and the encapsulation of British slapstick at its best. The only excuse for not revelling in its madcap mirth is if you've had a sense of humour by-pass.

And I guarantee it's the only show you'll see this year that refers to a man being kicked in his skin chimney.