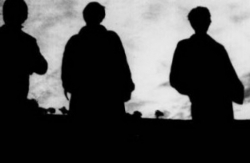 I've been a keen follower of this band for well over 30 years, and have seen them scores of times, and I have to say that this is the best I have heard them for a very,very long time. I really hope they don't leave it as long to play here next time.

After being forced to postpone their UK tour after just 2 dates due to singer Ian McCulloch developing a throat infection, the band quickly rescheduled the majority of the tour with Bristol playing host tonight rearranged from May 18th. The positive to come out of this is that in the preceding 3 weeks, the band's 12th studio album Meteorites has been released and is currently sitting in the top 40, and the new songs are just that little bit more familiar to everyone ! Having not played a headline gig in Bristol for many years, another few weeks wasn't going to matter!

The support band tonight were the curiously named Then Thickens, a 5 piece outfit from Lancashire playing their first Bristol gig. They delivered a strong competent set of indie rock that was well received by the crowd. In fact I didn't see anyone walk away during their set, which is often the norm with support bands. Definitely ones to watch.

After a brief break, a stage full of dry ice and Gregorian chant music through the PA can only mean that the headliners are about to take the stage. Within minutes, the venue seems to fill to near capacity.

The band are out, and they start with the title and opening track from their new album Meteorites, its atmospheric build and brooding lyrics perfectly capturing the moment Next up, we go back 34 years to the band's second single Rescue, which still sounds as good live as it did back then. Then it's track 2 from Meteorites, Holy Moses, followed by My Kingdom from the band's 1984 album Ocean Rain. By this stage, any doubts about McCulloch's voice have vanished as he delivers total quality. If anything he sounds better and stronger than he has done for some time, whilst guitarist Will Sergeant is as, always, note perfect. He can provide the most delicate of touches to augment McCulloch's vocals, or supply that killer riff in his own unique style.

Next is the gloriously quirky Bedbugs and Ballyhoo followed by their 1984 single Seven Seas. Then it's back to the current with new track Constantinople, a personal favourite from this release. And so the format continues. They seamlessly dovetail the old and the new together with Never Stop, New Horizon, All that Jazz, and recent single Lovers On The Run. This is classic Bunnymen, and should remain in their live set for a very long time. Bring On The Dancing Horses is next, before a stunning version of what McCulloch has often been quoted as saying "the greatest song ever written" The Killing Moon. They finish their main set with their first ever top 10 hit The Cutter, McCulloch throwing everything into the last few choruses.

The band return to encore their 1997 comeback hit Nothing Lasts Forever and after a couple of verses, they segue into Walk on the Wild Side, a dash of In The Midnight Hour, then back to finish off Nothing Lasts Forever. It's a Bunnymen tradition that at some stage of the gig, McCulloch will meander off into a medley of old classics during one of the songs. The single Lips Like Sugar brings the encore to a close with the enthusiastic crowd still shouting for more.

They come back for one last time to play the classic Ocean Rain. Thankfully, the crowd create the atmosphere by staying silent during the opening moody, almost harrowing verses before the grand triumphant finale.

I've been a keen follower of this band for well over 30 years, and have seen them scores of times, and I have to say that this is the best I have heard them for a very,very long time. They have developed an immense power whilst still being able to play soft and gentle when needed. McCulloch is still one of the coolest frontmen in the game, whilst Sergeant remains a master of the guitar. I really hope they don't leave it as long to play here next time.

Reviewed by Stu Bird for 365 Bristol