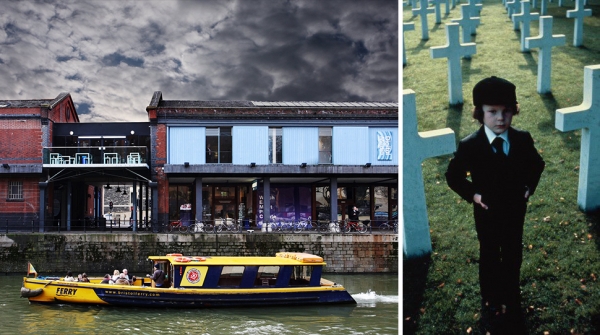 Watershed are screening 70s horror classic The Omen this weekend

One for you, Bristol film buffs: the chilling flick is being shown as part of the cinema's Filmic series.

Watershed are showing one of the all-time great horror films this weekend, with The Omen set to arrive at the renowned Harbourside cinema on Sunday 16 June.

The film is one of five classics being shown at Watershed this month as part of Filmic 2022, a series dedicated to celebrating the rich relationship between film and music.

Tickets for the 14:00 screening are on sale now and can be found here.

Our annual film-meets-music season Filmic continues on Sunday with an illustrated talk from Bristol-based film journalist @seano22 who will delve into the extraordinary 126-year history of the timeless power of music in film ???? Tickets below >> https://t.co/C8Q2BTDABA pic.twitter.com/nVpWQEpXmU

The Omen tells the tale of the spookily silent adopted child of US diplomat Robert Thorn, who begins to realise his son is not who - or what - he seems when a series of tragic 'accidents' start to befall the family.

The film is being shown at Watershed as part of this year's Filmic series, which sees curator and writer Sean Wilson select five of the most iconic and influential film soundtracks from 100 years of cinematic history.

This weekend's screening of The Omen will be accompanied by The Sound of Cinema: An Illustrated Talk, hosted by Wilson, charting the evolution of film scores and highlighting the diversity and tonal range of film music.

On The Omen's spooky score, Wilson says: "The Antichrist is real in the late Richard Donner’s classic Satanic horror, and composer Jerry Goldsmith is the one who truly makes us believe it.

"Goldsmith claimed his only Oscar for this diabolically effective mixture of devilish vocal incantations - including the main theme ‘Ave Satani’ - and heartbreaking human drama."

Tickets for The Omen, as well as next week's closing screening of the cult classic original Superman a week later, are on sale now and can be found here.

For more information on Watershed, or to find out what else is coming up this summer, head to the cinema's website or find the team on Twitter.