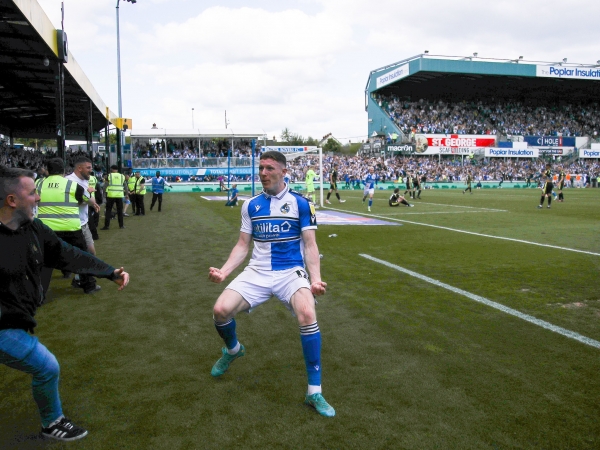 The Gas pulled off one of the most unlikely promotions of all time over the weekend.

Bristol Rovers have secured automatic promotion to League One with an incredible 7-0 win against Scunthorpe United, snatching the coveted third-place spot on a dramatic final day of the season.

The Gas went into Saturday's home fixture needing to win by five goals or more to guarantee a top-three finish, and pulled off a historic win thanks to goals from Connor Taylor, Eliot Anderson, Aaron Collins and Anthony Evans, after Scunthorpe's Oliver Lobley opened the scoring by converting into his own net.

Level on points and goal difference after final whistles blew across the country, Rovers pipped fellow promotion chasers Northampton Town to the final automatic spot thanks to their superior goals tally, having scored 71 over the course of the season compared to Northampton's 60.

Anthony Evans scored the pick of the goals, scoring a spectacular 25-yard free-kick to make it 5-0 in front of the home end with 15 minutes left to play.

On a sunny day at The Memorial Stadium, fans could barely contain their excitement at the most unlikely of scorelines, invading the pitch after Anderson's goal and subsequently delaying the game for close to 20 minutes.

Stewards managed to clear the turf allowing the two sides to play the remaining minutes, and the Rovers faithful wasted no time getting celebrations underway once again after referee Charles Breakspear blew his final whistle.

Joey Barton's side have shocked pundits by winning promotion back to League One at the first time of asking, having endured a tricky start to the season that saw them languishing in the relegation zone after their opening eight games.

After their early-season struggles, few expected Bristol Rovers to be anywhere near the play-off places this season, let alone secure automatic promotion.

Collins and Evans, two new arrivals last summer, were hugely influential during the upsurge in form, while teenager Anderson stood out with some commanding performances in midfield.

Now, the club have an opportunity to recruit and strengthen their squad in the summer, ahead of an eagerly-anticipated and historic return to the third tier of English football.