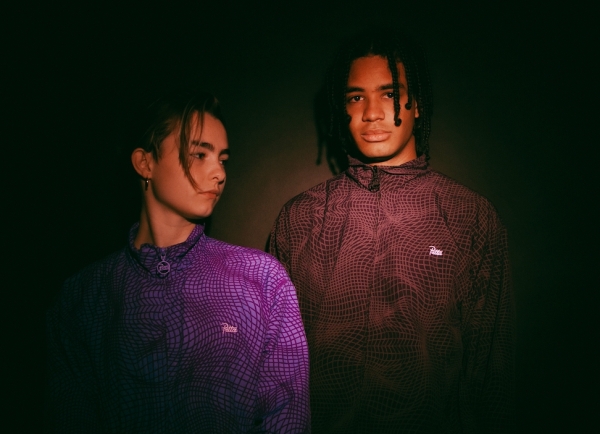 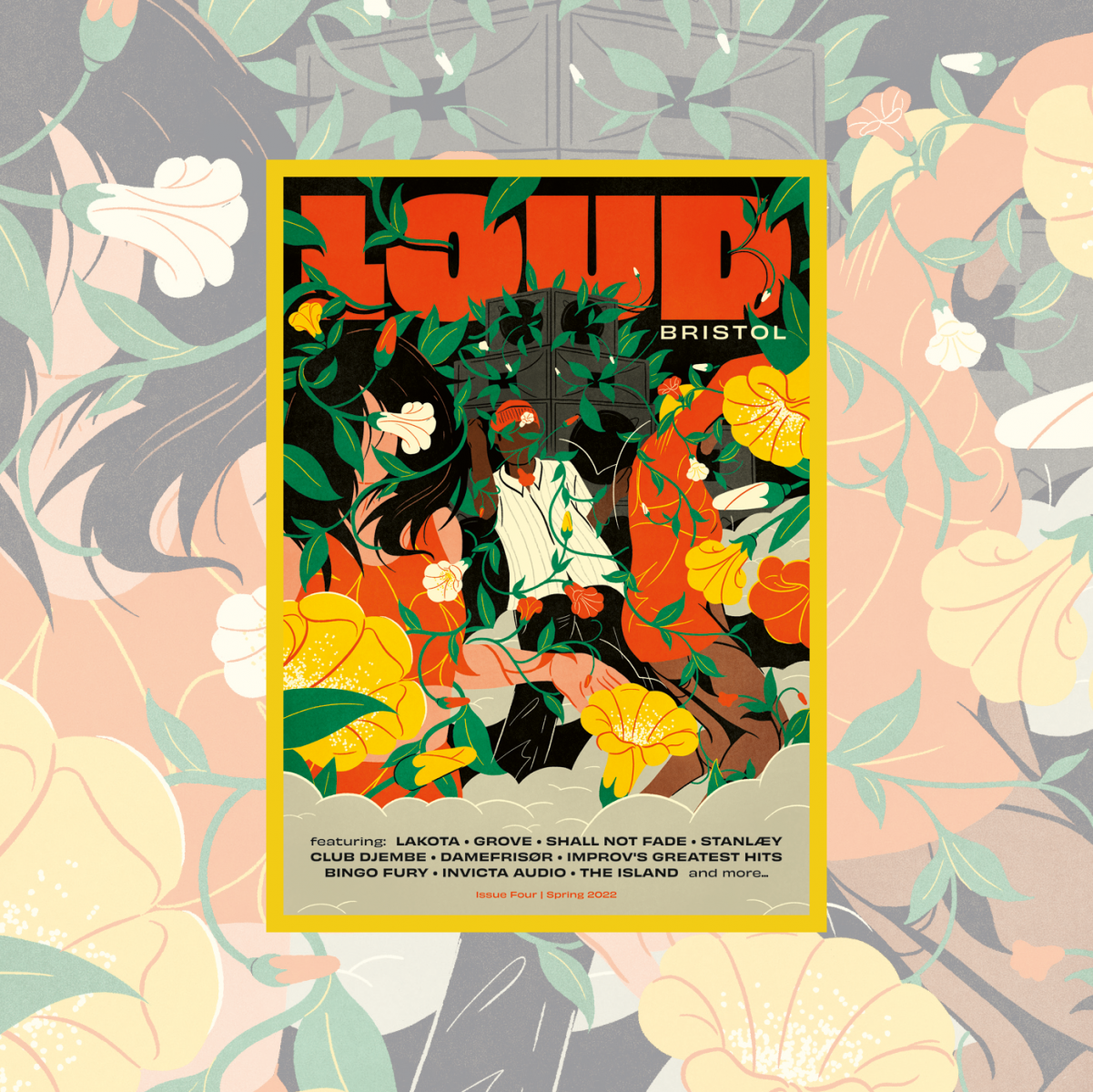 Bristol’s Invicta Audio has become one of the most talked-about names in British drum & bass, despite spending the bulk of its short lifespan in a crippling global pandemic. Label boss Anton Bailey looks back at his journey so far and ponders the secrets to his early success

Very few businesses thrived during the pandemic. Deliveroo? Most certainly. Hand sanitiser manufacturers? Sure. Events promoters? Not so much. In a year-and-a-half without nightlife every corner of the UK music scene suffered, operating under tight restrictions and unable to organise anything beyond the virtual world. In Bristol, though, one promoter in particular spent those barren few months quietly building his brand and growing his audience through a combination of hard graft, serious passion and clever marketing.

Invicta Audio is the brainchild of Bristol-based DJ and promoter Anton Bailey (pictured, right), launched initially as a drum & bass- focused events brand in 2019. Having moved to Bristol for university the year before, Anton cut his teeth on the local scene selling tickets as a rep for venues like Blue Mountain and Lakota alongside studying business entrepreneurship at UWE. “I was basically selling so many tickets in this huge student network that I had built up,” Anton recalls, “but I was only getting a pound a ticket or something like that. I was like ‘why am I putting so much money into someone else’s pocket when I could just do it myself?’”

And with that, Invicta was born. Anton jokes that his parents took some persuading to lend him the money for his first event, which he went on to lose. It was another six months before he dipped his toe back in, making a cool hundred pounds on a freshers party. Another half a year passed, and just when he was getting ball rolling on a third event, the pandemic started to take hold.

“Things kept getting postponed, cancelled, pushed back,” he remembers. Knowing that keeping Invicta relevant would be tricky without being able to host events, he wasted no time in launching an in-house record label. “I was like ‘right, if I want this brand to be alive when we come out, we need to do something different.”

“I do step back sometimes, look at what we’ve got in front of us, and just think ‘this is mad’”

Invicta’s first-ever releases were made available exclusively on Hypeddit, a platform set up to require fan interaction and follows on social media in return for free-to-download tracks. Essentially, you can have this new piece of music if you follow us on Instagram first. Anton explains his strategy was vital in growing Invicta’s online presence while they were shut out of clubs.

“Everyone was bored at home, looking for something to do musically, and those free downloads were the major element to our success during lockdown. We were just pushing out so much free music, and it was of a high enough quality that people were surprised not to be paying for it. I think that’s why we were able to get so much traction - people were like ‘why are these guys giving away these tracks for free’,” he laughs.

An 18-track Launch LP featuring a selection of up-and-coming producers was followed by a stream of compilations and EPs, including Invicta’s first paid release in October 2020. By the end of its first year the imprint had released 15 different projects and cultivated a glowing reputation up and down the UK. As is often the case in Bristol, Invicta Audio has been a lesson learned on the job for Anton. He admits he had “zero clue” how to run a label when he decided to make the leap, spending the first few weeks Googling and posting on Facebook to find out how to navigate a raft of tasks and stumbling blocks. 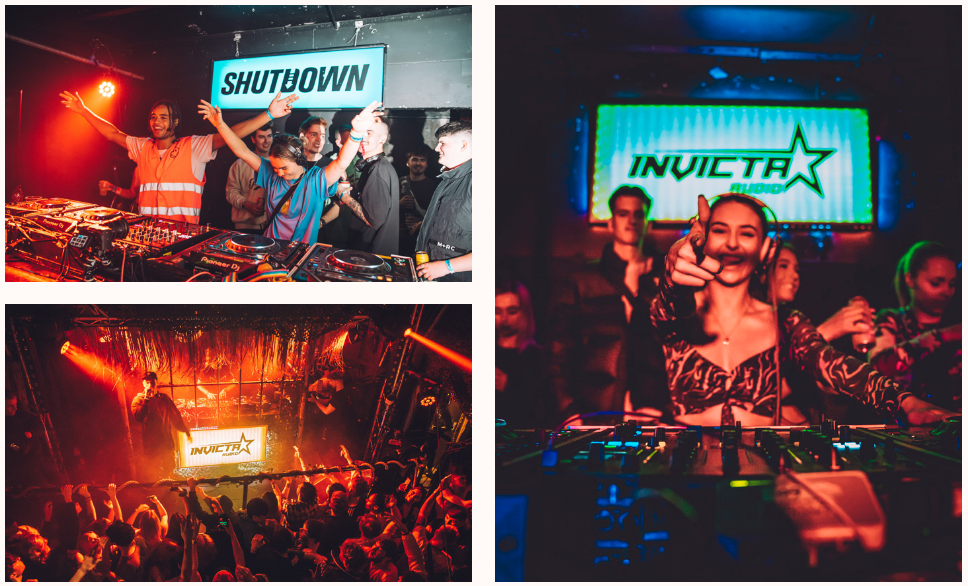 Despite only launching Invicta in 2019, Anton has organised sell-out shows in Cardiff, Nottingham and Leeds as well as Bristol. Photos: Soul Media

Relationships with music professionals across Bristol proved instrumental in securing help and advice in Invicta’s early stages. Working at Lakota allowed Anton to observe first-hand the trial-and-error process of running major events, while owners of established brands like Born on Road have been consistently available to offer their expertise on the business side of things.

“I had been asking Eoin [Fenton, then Lakota’s Head of Marketing] to do events before Invicta had even released a track, and he always
just said ‘no, you’re not ready yet’. Then when he eventually ended up giving me that opportunity it went really well, then he gave me another one and we sold it out again – I was actually learning how things are done properly. That process made me realise there was much more work to be done at that point, which was a massively important lesson. That’s just one example of some really good insight - I took all of that in, and I’ve been able to implement that into my own business.”

Putting that savvy business sense into practice, Anton has been able to engage with audiences online throughout the pandemic, backing up a string of well-received musical projects with effective social media promotion. “One thing we tried to do during lockdowns was keep in mind that there was a good year-and-a-half of people who had turned 18 during the pandemic and never been to a rave before. We really hammered out event videos on our social media, so that when we came out of lockdown, people were looking for Invicta.”

The method sounds simple, but it worked wonders. At the time of writing, Invicta has surpassed 19,000 Instagram followers, and they’ve sold out shows in Cardiff, Nottingham and Leeds as part of a hugely successful UK tour. Not bad for a brand yet to reach its 3rd birthday. Anton’s passion for the project and drive to succeed are palpable throughout our interview. It becomes clear over the course of an hour that his authenticity has been a huge driver for Invicta’s increasingly positive reception.

From promoting up-and-coming artists on the label (anyone can still submit music for release, regardless of experience or stature) to highlighting non-male and minority artists on event lineups, Invicta has all the hallmarks of a progressive, open-minded imprint without trying to force the issue. “I won’t put anyone on just to tick a box – we just do it in a way where we’re not weird about it. [Invicta residents] Anais and T-Lex are there because they’re better than all the males in our group,” Anton laughs.

“Brands rightly get called out for just booking males, or overlooking minority artists, but in our case diversity just comes naturally. A lot of events will book a female artist then shout about it, and it’s kind of like ‘ok... well done’. I just want equal opportunities, and people to get into the positions they’re in because they fully deserve to be there. Even though people see and respect what we’re doing, we’re just being ourselves.”

For a label that has, in just two Covid-plagued years, dropped more than thirty releases, sold out parties across the country and been nominated for awards by the likes of DJ Mag and UKF among others, the sky truly is the limit. “If you said back when we did that first release in May that in 18 months you’re gonna be on a UK tour, have over 19k on Instagram and everything else, I’d have been over the moon,” Anton says. “I do step back sometimes, look at what we’ve got in front of us, and just think ‘this is mad’, but in reality, it’s like ‘where do we go from here?’”

Invicta Audio’s approach to music, events, and even marketing, is innovative and refreshing. The label is expertly towing the line between music and business, and Anton, working tirelessly to bring it all together and position Invicta at the forefront of UK drum & bass, is reaping the rewards. Long may it continue.