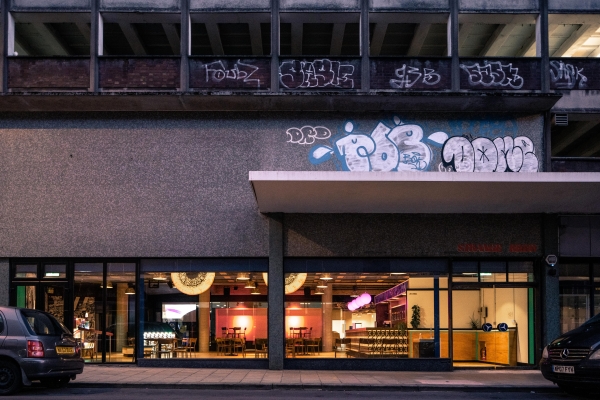 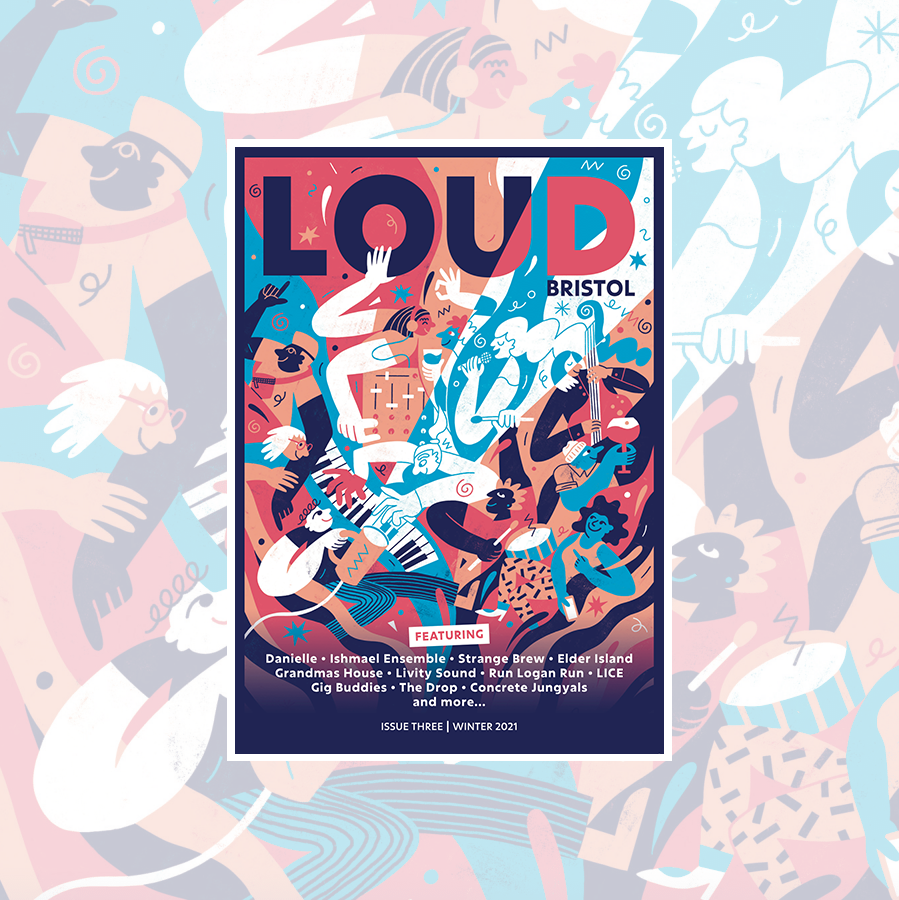 It’s been a tough start to life for Strange Brew. Initially unveiled in 2019 but in the works for several years prior to that, the venue was dreamt up to provide Bristol with a nightlife space it’s been missing for some time: a medium-sized club catering for a broad spectrum of genres, not constrained by potential noise complaints from nearby housing developments.

Early signs for the project were overwhelmingly positive. The venue team – well-known on the local scene thanks to ten years of parties under their brand Dirtytalk – managed to raise more than £50,000 in May 2019 alone through a hugely successful crowdfunding campaign. A location was secured, license was granted and, in early 2020, construction was well underway. Eager members of Bristol’s musical community were watching as the city’s newest independent venue took shape. You can probably see where this is going.

On a busy afternoon on Fairfax Street, I catch up with Leigh Dennis, one member of the four-person team responsible for getting Strange Brew off the ground. As I walk in I’m met with a lively environment, events professionals and artists buzzing around each other preparing the space for the opening night of Batu’s new festival, En Masse. “It was tough, because we got the keys in January 2020, then in March things started kicking off with Covid,” Leigh recalls. “At first, we didn’t really know what to expect – we thought it would be this short-lived thing, but it obviously didn’t turn out that way.” After such widespread optimism surrounding the venue’s early days, the months that followed quickly became a fight to stay afloat.

Once lockdown restrictions were introduced, the venue received some business grants from the council, Arts Council England and the government, but missed out on others. A chance encounter led to Strange Brew being used for filming of Stephen Merchant’s new BBC sitcom, which secured some extra income, but more unavoidable losses meant the team were forced to launch a second, emergency crowdfunder in November 2020. Reflecting on their perilous situation, Leigh doesn’t pull any punches when he tells me Strange Brew simply would not exist today without the support of a broad community of events professionals, tradespeople, artists and music fans in Bristol.

“We’re very aware that this is an important community space. That means making sure as many genres, promoters and projects as possible can access it.”

“At times it really couldn’t have been more on a knife-edge,” he explains. “We really didn’t want to do that second crowdfunding campaign because we did one to build the place, so we felt embarrassed to have to go back to people and be like ‘we need some more money’. It ended up being an absolute lifesaver.”

Like their contemporaries, Strange Brew have spent much of the past year-and-a-half adapting and re-adapting their space to accommodate ever-changing social distancing and Covid safety guidelines. Out of lockdown, into ‘tier’ restrictions, back into lockdown and so on, the venue have rearranged their programming and interior space more often than Leigh cares to remember. A virtual launch in August 2020 was followed by Strange Brew’s first-ever in-person event in September: a socially-distanced party that, despite having been a long, long time in the making, was a far cry from the grand opening the team had in mind just months earlier.

On-again-off-again lockdown restrictions continued until Leigh and co were finally able to set about developing their events calendar this year, using lingering travel restrictions as an opportunity to showcase an array of talented hometown musicians and promoters. “A venue of this size, we were expecting to be putting on a lot of international acts by this point,” Leigh says, “but focussing more locally has been really great in so many ways. It’s allowed us to get to know the people on our doorstep and develop a real trust with a new network of artists, and it means there’s an even bigger sense of community around our events.”

Now, close to four months post-lockdown, Strange Brew is firmly back in the swing of things. Celebrated local crews like Club Blanco, Livity Sound and Slack Alice (to name a few) have hosted a broad range of parties since the summer, while Snazzback, Viridian Ensemble and Katy J Pearson are among the live acts to have taken the stage so far. In a familiar case of ‘small world’ circumstances in Bristol music, Pearson was briefly a member of the bar team before the owners saw her musical career taking off and invited her to perform live. 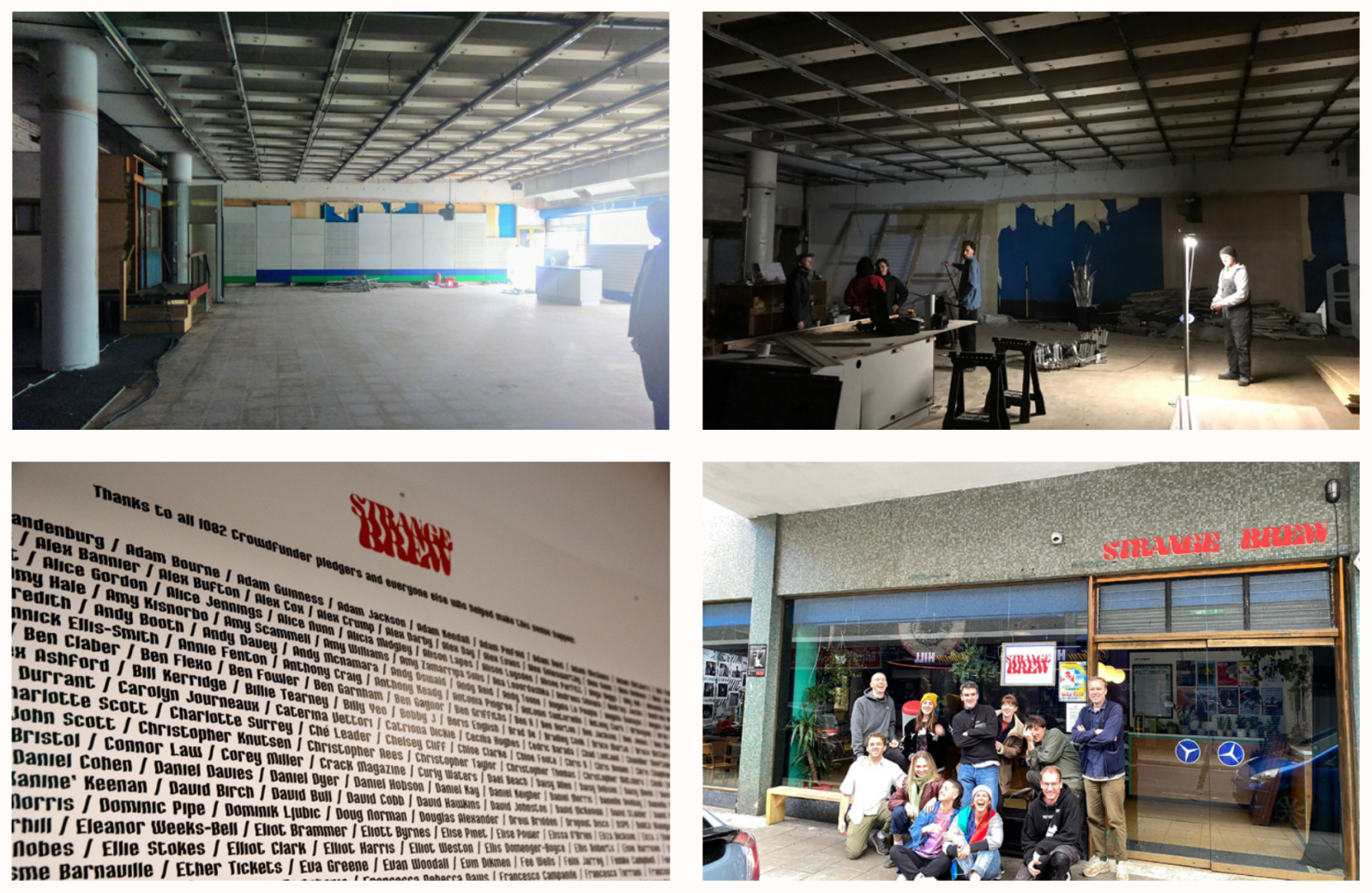 Clockwise from top left: Strange Brew pre-construction; the venue starts to take shape in 2020; Leigh (front right) and the full Strange Brew team earlier this year; a plaque dedicated to the 1,082 supporters who donated to the venue’s initial crowdfunding campaign.

Alongside their musical programming, Strange Brew are actively working with a number of Bristol-based social enterprise and educational organisations on a regular basis, from Mix Nights to Black Acre (providing work experience as part of the label’s Youth Development programme), BIMM and DBS. It does, after all, make sense to operate as a practical resource for a community that’s done so much to make the venue a reality. Leigh takes time to list the people and businesses that have offered their time and services during the pandemic, and assuredly outlines how instrumental that support has been.

Builders, lighting engineers, sound engineers, visual artists, musicians, beer suppliers – “you name it, we’ve had the help” – the Strange Brew project has undeniably been propped up by the outreach and generosity of Bristol’s extensive pool of creative professionals. It becomes clear throughout our interview that there’s a desire at Strange Brew to pay things forward, to contribute to a thriving scene, which motivates the team to weave their venue into the city’s musical fabric.

“When we set this place up we knew we were doing it for a specific reason and to support more alternative, underground, DIY electronic music,” Leigh explains. “We knew we wanted a lot of our programming to be oriented that way, but we’re also very aware that this is an important community space. That means making sure as many genres, promoters and projects as possible can access it.”

There is still some apprehension on the dancefloor, because Covid-19 hasn’t just gone away. The financial impact of the pandemic will be felt for months and years to come, and there’s no saying whether or not there are more nationwide restrictions or club closures on the horizon. Strange Brew has been a long time in the making, and will inevitably still run into some issues as a fledgling, independent venue. In any case, the team will continue to do what they have done since finally opening their doors last year: provide a vibrant, welcoming, long-lasting space for a music scene that’s played an integral part in their venue’s survival.