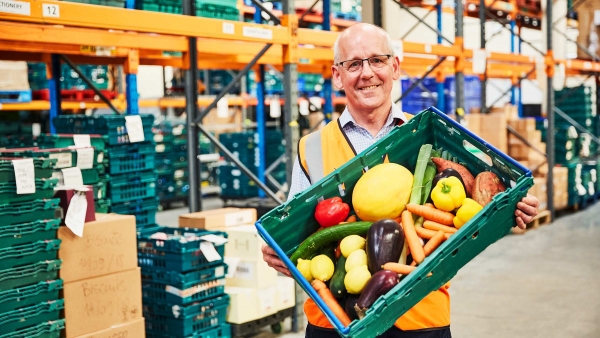 The #FoodOnPlates initiative aims to prevent millions of tonnes of fresh, unsold food from being wasted.

The Bristol-based South West arm of nationwide charity FareShare have officially given their backing to the #FoodOnPlates campaign, hoping to raise awareness of huge quantities of unsold fresh food being wasted in the UK.

While one in eight people nationally struggle to afford food, a number highly likely to have risen as a result of the pandemic, shops and supermarkets unnecessarily throw away millions of tonnes of produce every year.

Taking inspiration from France - where businesses are offered tax breaks for redistributing food instead of disposing of it - #FoodOnPlates is pushing for the government to incentivise companies to pass surplus food on to charities and community groups.

The #FoodOnPlates campaign calls for funding of £5m a year to help farmers and food producers cover the costs of safely storing and transporting unsold food so it can be redistributed to help feed those in need. Read why we're backing this campaign: https://t.co/P4vAEMBihC

Speaking this week, FareShare South West CEO, Julian Mines, said: “The need for food support soared in the early days of the pandemic and our frontline partners saw huge demand for their services, and an increased need to support users with food provision.

“Pre-pandemic levels of food insecurity were already significant and the last year has simply exacerbated and laid bare the issue. With that in mind, we’re proud to be part of the #FoodOnPlates campaign as we fundamentally believe good food should never go to waste.

“Instead, we want to see that food reach those who most need it here in the South West and across the country.”

In response to the pandemic, the nationwide FareShare network redistributed more than 19,000 tonnes of emergency food supplies, as well as 35,000 tonnes of good-to-eat surplus food, unsold by farms and other producers.

The FareShare South West team recently announced that they were operating at six times their usual capacity for over a year to keep up with the increased demand for food support.

Food for more than 6 million meals was delivered across the region from March 2020 to March 2021, securing vital provisions for 416 frontline charities, schools and community groups.

Bristol-based charity @FareShareSW have revealed they were operating at SIX TIMES their usual capacity from March 2020 to March 2021 ????

Their work throughout the pandemic has secured food support for more than 50,000 people across the region ???? https://t.co/flMb45Bnir pic.twitter.com/vB8ojKN6j1

Speaking in support of the #FoodOnPlates campaign, FareShare CEO, Lindsay Boswell, said: “Our network of frontline charities have been a lifeline for families during the pandemic, and, sadly, demand now remains at similar levels.

“It’s a scandal that good food is left to rot in our fields or be thrown into biogas digesters or landfill when so many families are still dependent on food aid in the wake of the crisis, with thousands more unable to afford healthy fruit and veg.”

For more information on #FoodOnPlates, or to follow news and updates over the coming weeks, head to the FareShare South West website or find the team on Twitter.