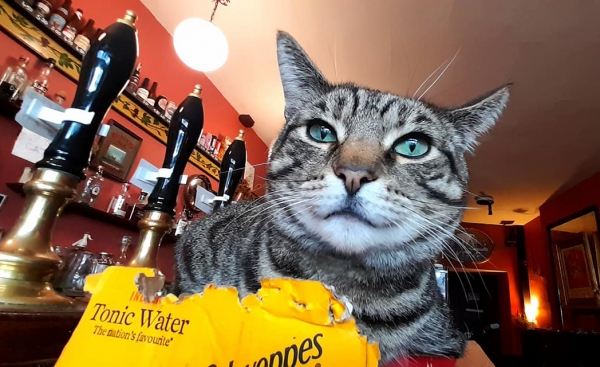 Supporters have raised more than £23,000 to keep the popular BS1 pub open.

Much-loved local and iconic Bristol 'cat pub' The Bag of Nails reopened last week, following a successful crowdfunding campaign that raised over £23,000 to secure its future.

In line with the latest government guidelines, indoor hospitality venues across the UK were permitted to open from Monday 17 May, with safety measures to remain in place until 21 June at the earliest.

A firm favourite among Bristolians and visitors since its grand reopening in 2011, The Bag of Nails is loved just as much for its diverse selection of beers and ales as it is for its extended family of felines that live inside the pub.

Proudly stocking a wide range of produce from locally- and nationally-renowned breweries, the pub personifies Bristol's independent spirit and has earned cult status across the city and beyond.

Outlining the reasoning behind this month's crowdfunding campaign, Bag of Nails Assistant Manager Andy McWilliams said the team were in a precarious position, facing mounting debts and a "monstrous" cat food bill that they're increasingly unlikely to be able to cover on their own.

The statement went on to outline that the pub's annual cat costs come in at more than £8,000, while rent arrears had mounted to £15,000.

After a huge outpouring of public support from local residents, fans of the pub, community organisations and breweries, a fundraising target of £23,000 was met in less than three weeks.

However, despite the good news for The Bag of Nails and the thousands of pubs that have reopened across the UK this month, the future still looks extremely uncertain after well over a year of COVID-related closures and restrictions.

It's vital that we all do what we can over the coming weeks and months to get behind independent pubs, giving them the best chance of survival after such a long period of difficulty.

For more information on The Bag of Nails, to follow news and updates, or to donate to their crowdfunding campaign while it's still open, head to their Facebook page or find them on GoFundMe.