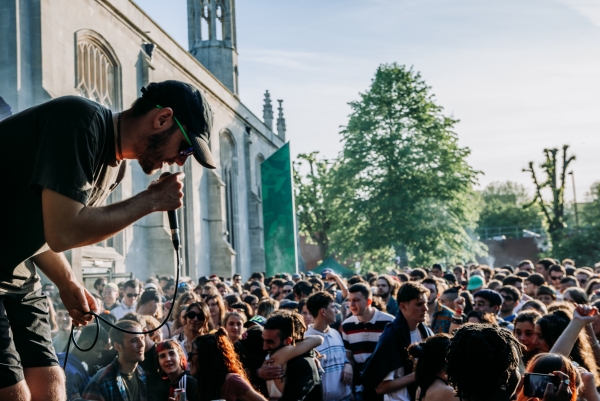 A brief history of the Trinity Centre | LOUD Magazine 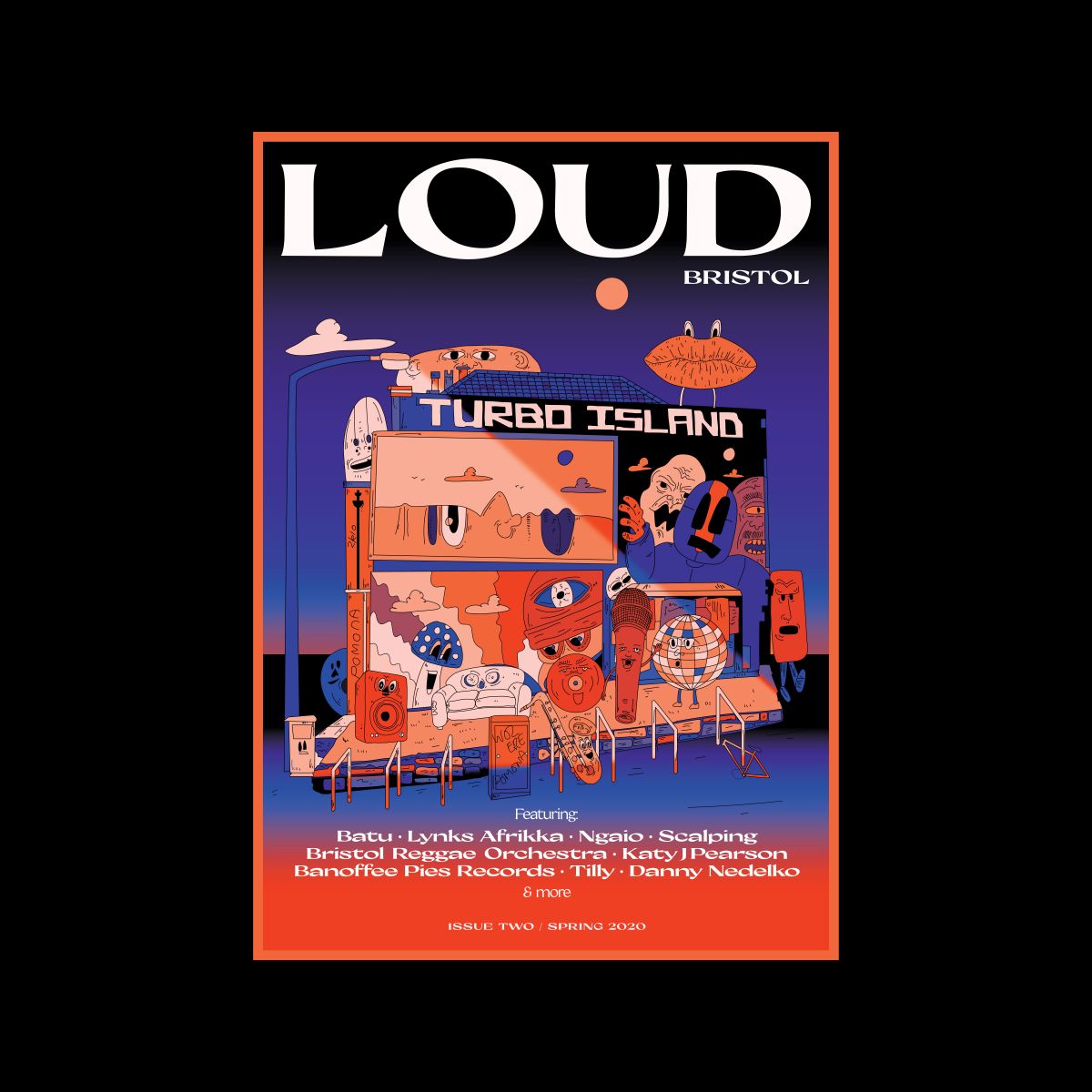 In an unexpected but welcome change from our all-too-common ‘*insert venue name here* is Under Threat’ pieces, we delve into the history and cultural significance of one of Bristol’s best-loved live venues

The plan for this article, before I sat down with anyone from Trinity Centre, was to write a detailed piece on nearby property developments putting the venue under threat of potential closure. The neighbouring Trinity Road Police Station has been bought, with flats due to be built in its place, potentially leaving the Trinity Centre open to noise complaints. Naturally, we assumed the worst and prepared to put together yet another call to arms to protect a key Bristol venue.

Curiously, though, the conversations between the Trinity Centre team, Bristol City Council and prospective developers have, so far at least, been largely positive. Venue Manager Jamell Ackford tells me that, since planning started in early 2018, all parties have been cooperating. The signs, for now, are good. “They’ve been doing sound checks on top of the police station, as well as inside the venue. They’re doing what they need to do, which is great,” he says.

Nothing to see here, then. Suddenly, my prepared notes and questions about development time frames, venue protection and how to get behind the Trinity Centre are useless. There’s no point asking a venue manager how the public can save the venue if the venue doesn’t need saving from anything. Instead, with the pressure off, I spend the next hour with Jamell and Edson Burton, Trinity’s Heritage & Engagement Coordinator, discussing the history of one of the city’s most unique events spaces. 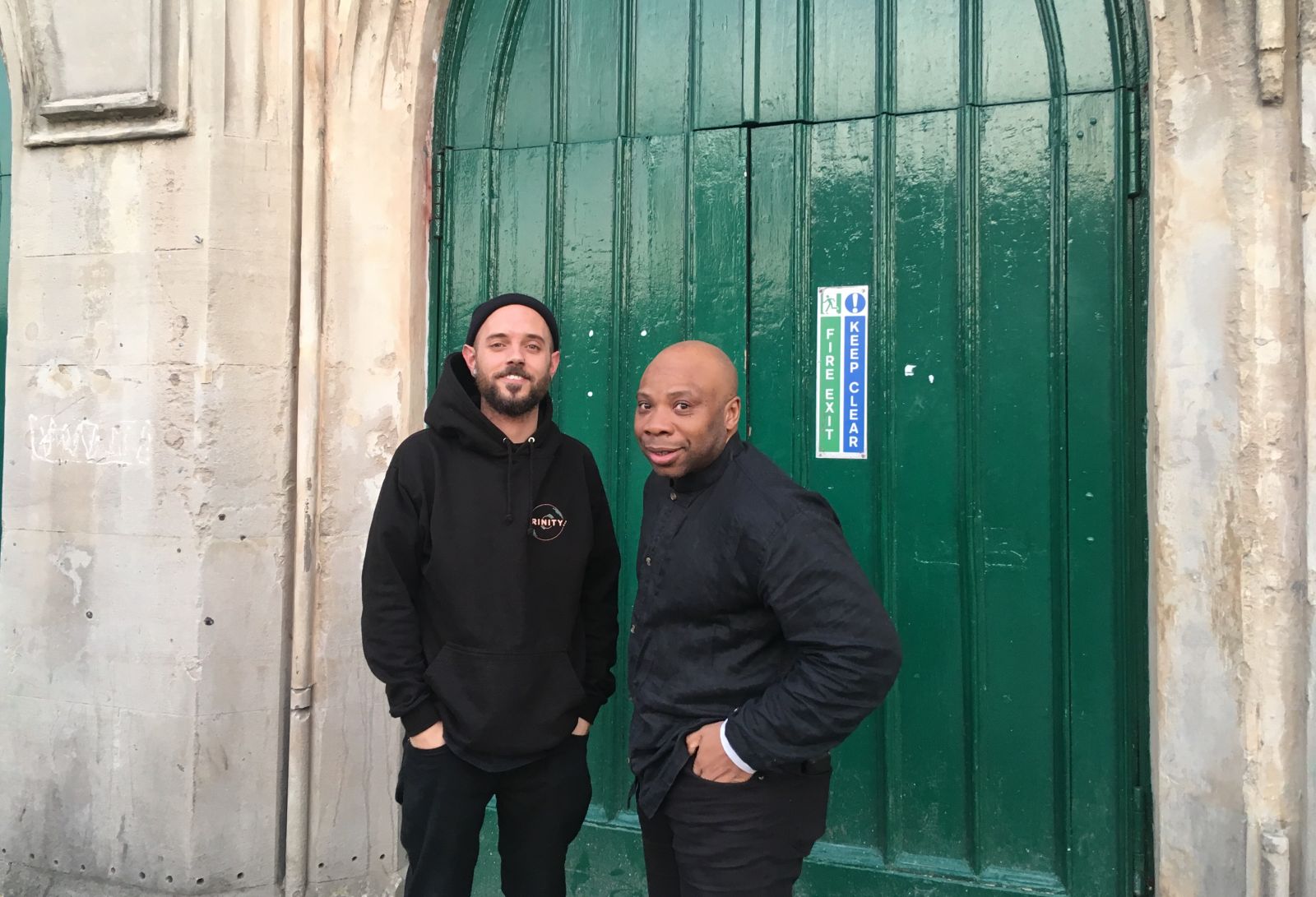 Jamell Ackford (left) and Edson Burton outside the Trinity Centre

The story of the Trinity Centre is one of character, heritage and deep cultural significance. Since becoming a deconsecrated church in the late 70s, the venue has become a vital hub for music in Bristol as well as a space for the local community. From the get-go, when the building was taken over in 1977, the Trinity Centre was about skills development for young people in the area. But, under the management of promoter Roy de Freitas and the African-Caribbean Community Association, it became much more than that.

Edson describes Trinity as an incubator, a facilitator of emergent youth movements, from its early days during the birth of punk and reggae to present-day interpretations of jazz and afrobeat. “In the 70s and 80s you’ve got these movements taking off that haven’t got a base in the city centre. Then, you get all the punk-reggae mashups like ska and two-tone, classic Bristol bands like Black Roots and Talisman, and acts like Maxi Priest and Benjamin Zephaniah.” All of the above found a home at the Trinity Centre during a crucial part of their respective infancies, when other venues simply wouldn’t give them the time of day.

After a brief closure and re-opening in 1992, the Trinity Centre was right in amongst the emergence of dance music in Bristol. The 1994 Criminal Justice and Public Order act then forced the free party scene indoors, and Trinity was, again, an indispensable hub as electronic music started to splinter into the huge spectrum of genres we know today. 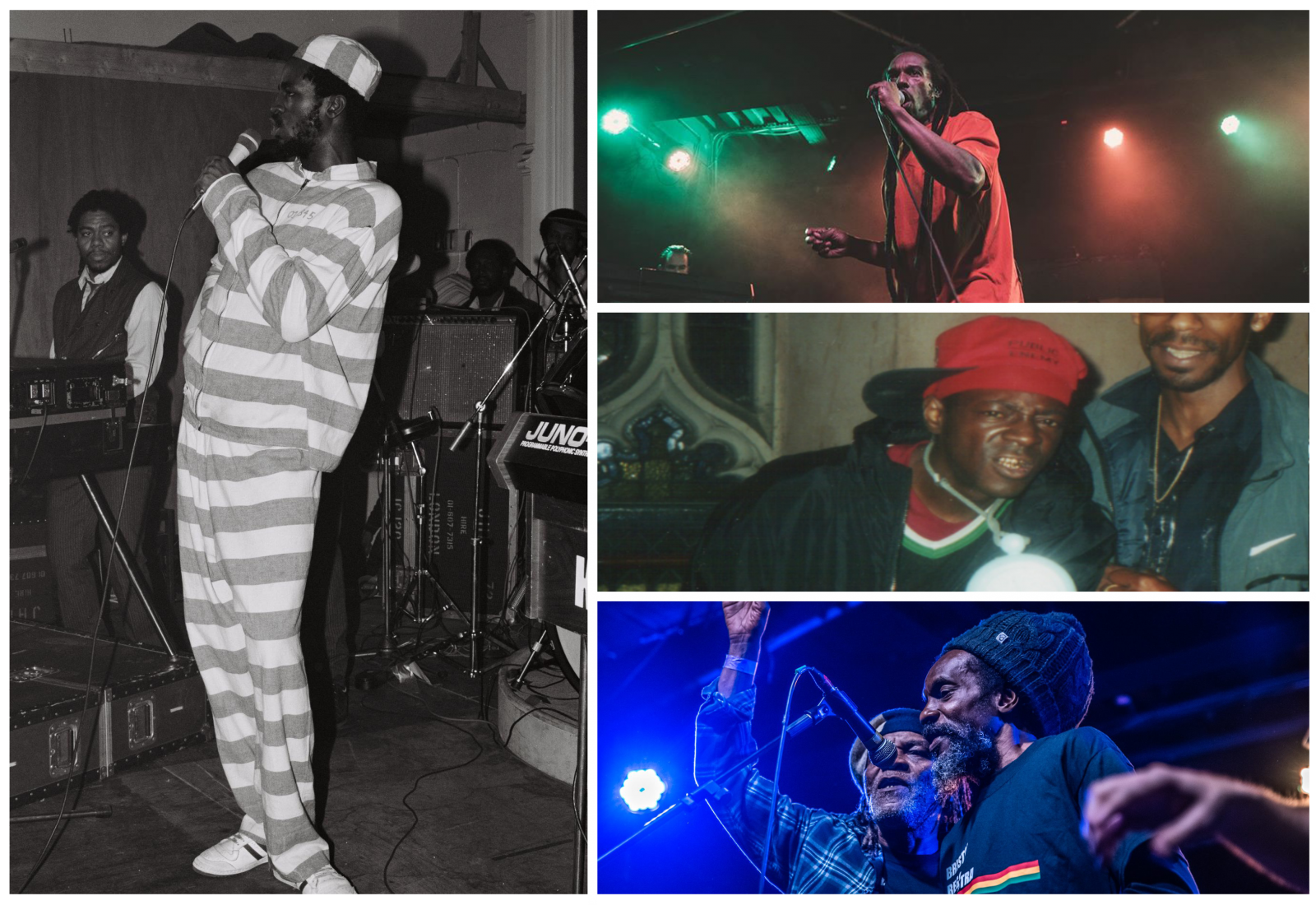 Keeping the pace with Bristol’s ever-changing musical landscape is something that the Trinity Centre team still strive to do. The Young Echo collective launched their first album at the venue in 2018, the inaugural Afrofest was a resounding success last summer, and Jamell explains that they’re totally committed to representing the very best the city has to offer. “We’ve got such a wide range of artists here,” he says, “and Trinity is still such an important nurturing space for emergent sounds.”

The Trinity Centre’s charm is soaked into its almost-200-year-old structure, its bespoke wooden dancefloor and striking stained-glass windows. It does, of course, make it easier to attract artists when you’re running one of Bristol’s most distinctive venues. “Trinity has that sense of freedom, that extra energy and a huge character, which I think suits some forms of music and some genres really well,” Edson tells me.

“Benjamin Zephaniah here is quite an iconic experience, for example. You’ve got an established performer who grew up in these venues, returning and playing to a packed house and a real mix of people. If you think about roots music as spiritual music, it doesn’t get much more suitable than a church.”

“Every venue has its place, but the Trinity Centre’s identity is more than just a music venue. It’s a space that is, essentially, part of a wider Bristol story. That character is hard to replicate”

As we get into more detail about Trinity’s appeal, I’m struck by the way Edson and Jamell are able to articulate what it really means to them personally, to the local community and to Bristol as a whole. The space, and the atmosphere within it when everything falls into place, make for truly one-of-a-kind live experiences.

“Because of the eclectic nature of people who come here, the pricing and where it’s situated, there’s a good vibe here. When people feel safe they also tend to have a good time, and a band get to enjoy that and feel that energy. There’s an alchemy between artist and audience, and that alchemy, I feel here, is really quite unique.”

When you buy a ticket for a Trinity gig, or a party, your connection with the venue starts the second your payment’s gone through. ‘I wonder what this person will be able to create here’, you might think. Or ‘how is this band going to make the most of the space?’

It’s a rare feeling to be interested, or even bothered, about where your money’s going when you buy a ticket. But, when you buy a Trinity ticket, you know you’re supporting something more than just the music. “You’re buying into the moral ethos of a social enterprise,” as Edson puts it. “Every venue has its place,” he continues, “but the Trinity Centre’s identity is more than just a music venue. It’s a space that is, essentially, part of a wider Bristol story. That character is hard to replicate.” 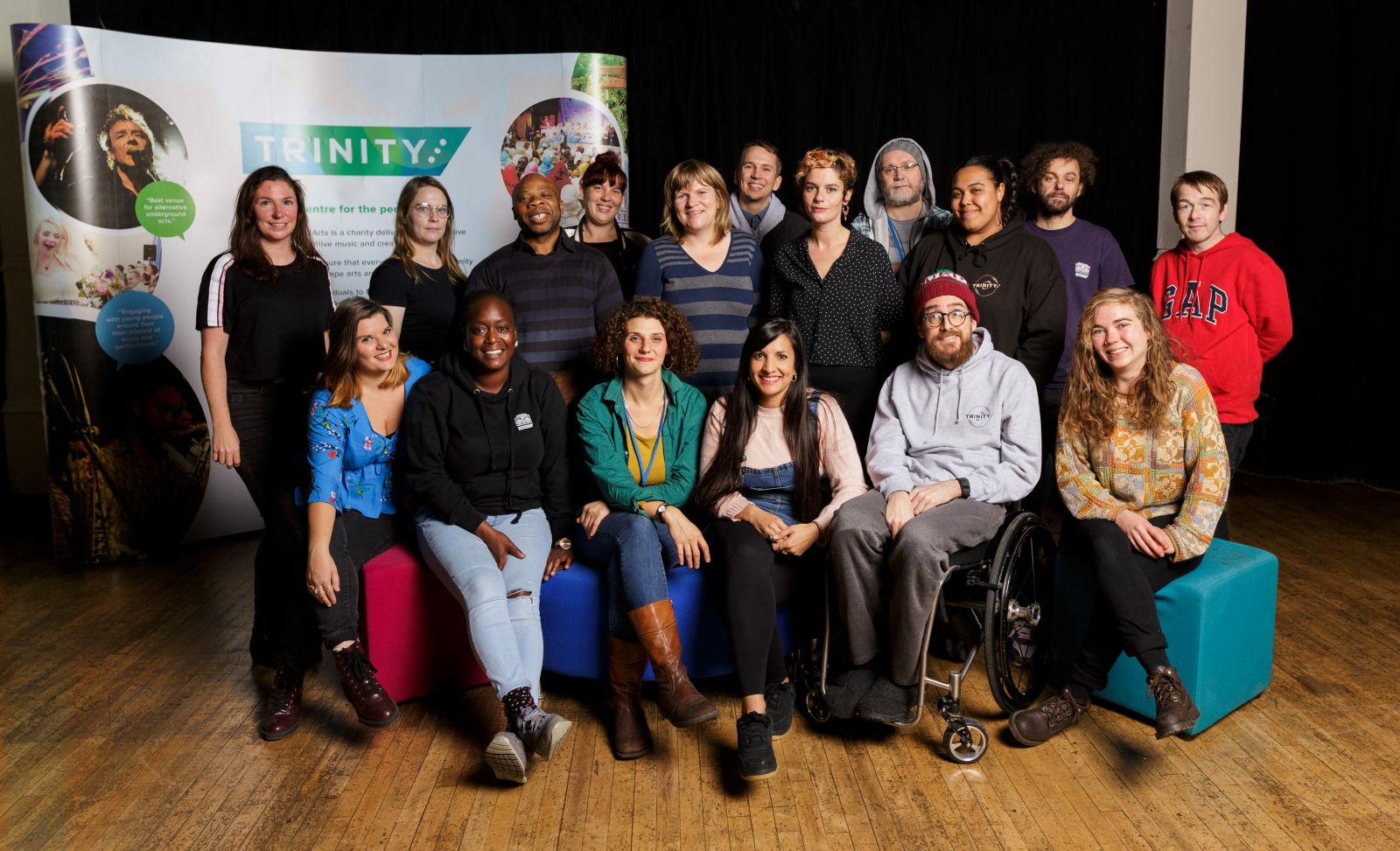 A drumming session has been in full flow upstairs throughout our interview, there are volunteers working on the garden outside, and the office has been a buzz of activity since my arrival. From the moment you walk through the door, you get the sense that Trinity is a proper nerve centre, of music, arts, history and community. Jamell believes that constant activity rubs off on artists when they come to play, further adding to the venue’s atmosphere.

“When an artist comes here we might have a conference upstairs, or drumming going on. They’ll meet the team who have been here all day, see the gardeners outside doing their thing, or young people working in the studio, and think ‘wow, ok, what do you guys do?’”

As for the developments, it remains to be seen how nearby flats will affect the Trinity Centre long-term. Housing developments are, as we know all too well in Bristol, potentially fatal for venues, but the team are optimistic. Current plans suggest that a percentage of the new builds will be affordable homes, and Jamell is keen to stress that Trinity are wholeheartedly in favour of that. But, given that the venue is so historically significant both musically and for the community, the appropriate steps need to be taken to preserve it.

“It’s in everyone’s benefit to make sure that, after losing so many community spaces in recent years, the ones that remain survive and are run well,” Edson says. The volatile nature of Bristol’s venue landscape is all too familiar, and it’s clear that the Trinity team are mindful of being prepared for the worst despite the situation they find themselves in.

For now, the Trinity Centre doesn’t need saving, but you should make use of it, support it and enjoy it as though it does. Book that gig ticket. Look into their arts programme. Volunteer your time. It is, undoubtedly, one of the most important cultural spaces in Bristol.