Till Death Doom Us Part Metal Festival at Lakota in Bristol 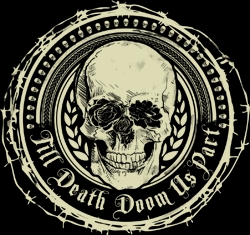 Perhaps a less ambitious approach (1 stage rather than 3) and a couple of well established names as well as some tightening up on the organisational side will see this festival moving from strength to strength.

A brave move, to organise a festival of this scale for so many up and coming bands of these genres, but perhaps not including any bigger names came at a price, as turnout was disappointingly low. The venue for the festival, Lakota, was a musky sort of affair, that swung dangerously close to the wrong side of dingy. This needn’t have been a problem but did nothing to distract from the somewhat disorganised kick off to proceedings. Doors opened at 6:00pm but with no bands beginning until 7:30 due to ‘technical hitches’ and what appeared to be lax time scales, there was something of a despondent air initially. However, despite this, and the substantial number of acts cancelling at the last minute, there was plenty of quality on show, with all bands doing themselves justice and throwing their heart and soul into it regardless. The dramatically altered line-up (one of the headliners pulling out completely), resulted in time changes for all the bands, which meant many people were unsure of exactly which band were playing until an introduction was made. However, in the true spirit of an underground festival, people were tolerant on the whole and it was a good showcase of up and coming talent.

Several of the acts shone out from the rest, notably Valfader on the mainstage, garnering the most attention with their fluid sound that moved seamlessly between melodic passages and heavy doom riffs. Creating an imposing ‘wall of sound’ they raised the tone of the evening and the enthusiasm of the lively onlookers.

Bloodlung from South Wales were similarly well received. They described their style as “offensive”, “unpalatable” and “unacceptable” but their heavy grooves and occasional forays into punk were found wholly acceptable to the enlivened festival-goers, many showing their appreciation long after the set had finished.

Gothic doom band Edenfall were perhaps the unsung heroes of the night, battling on as the headlining act on the second stage, giving a brilliantly dark performance despite the venue’s questionable technical staff taking over an hour to get the mix right. The Cheltenham based, female-fronted, gothic band offered mix of melancholic guitars, driving riffs, pounding drums and a super tight bass line with beautifully haunting vocal sounds.

I will certainly be revisiting this event next year with the hope that a similar number of fine bands will be on display. However, perhaps a less ambitious approach (1 stage rather than 3) and a couple of well established names as well as some tightening up on the organisational side will see this festival moving from strength to strength to become a regular treat for Bristol festival goers who prefer their music on the dark side.