It’s bright, colourful and extremely fun to play, it’s something we are short of these days and something we need more of. I can recommend this to someone who is a child or an adult, it is a must play.

I once again take a break from the over the top violent or deeply depressing games, where I play something happy, colourful and fun. It doesn’t get any more fun than Sonic, however this time it is not a platforming adventure but instead he in the racing seat in a kart racer in the form of Team Sonic Racing. The last time we had a racing game in the Sonic series was back in 2012, with Sonic & All Star Racing Transformed which was a decent entry in the kart racing genre. Does Team Sonic Racing add anything to the formula? No, but that doesn’t detract from the overall experience. 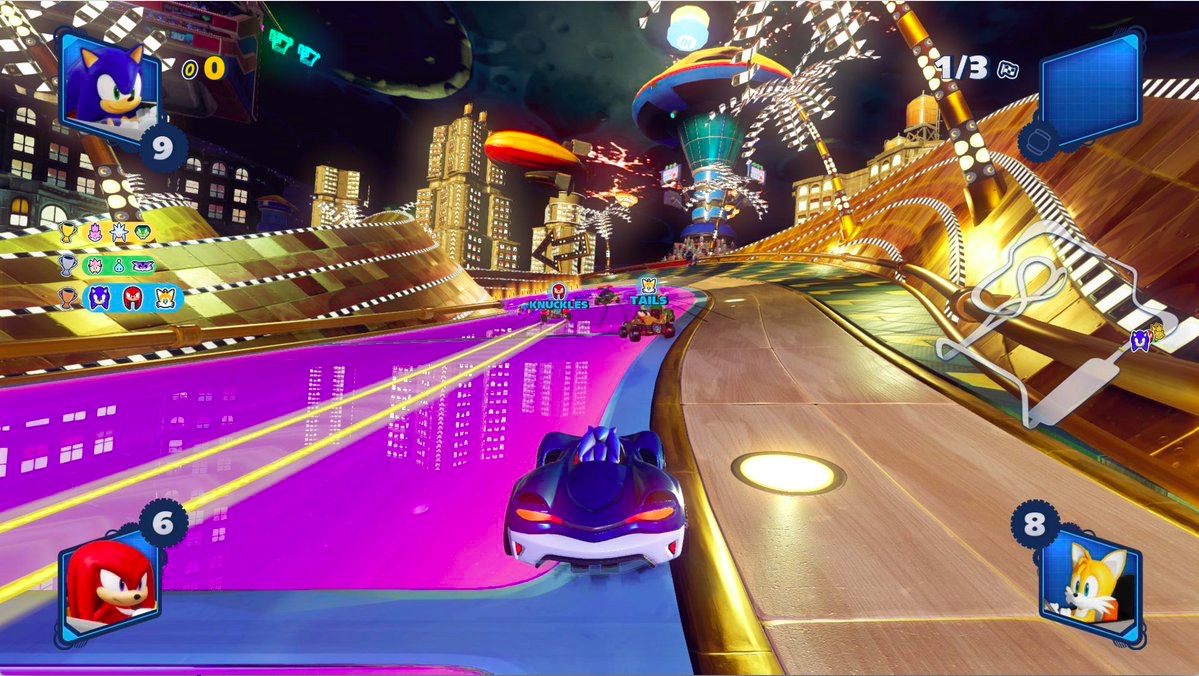 Not really a story to speak of as it is a racing game, so the gameplay is front and centre in this game. There is an adventure mode, but to be honest the plot is basic context and is not exactly Shakespeare material as it sets up each challenge. These challenges can range from anything from winning a race, collecting rings in quick succession with a time limit or participating in standard time trials. These challenges do start to repeat somewhat as you venture forward, but to be honest there is only so much you can come up within the racing genre. Outside of the adventure mode you have grand prix, single race, time trials and local and online multiplayer so there is plenty to do with friends or alone. 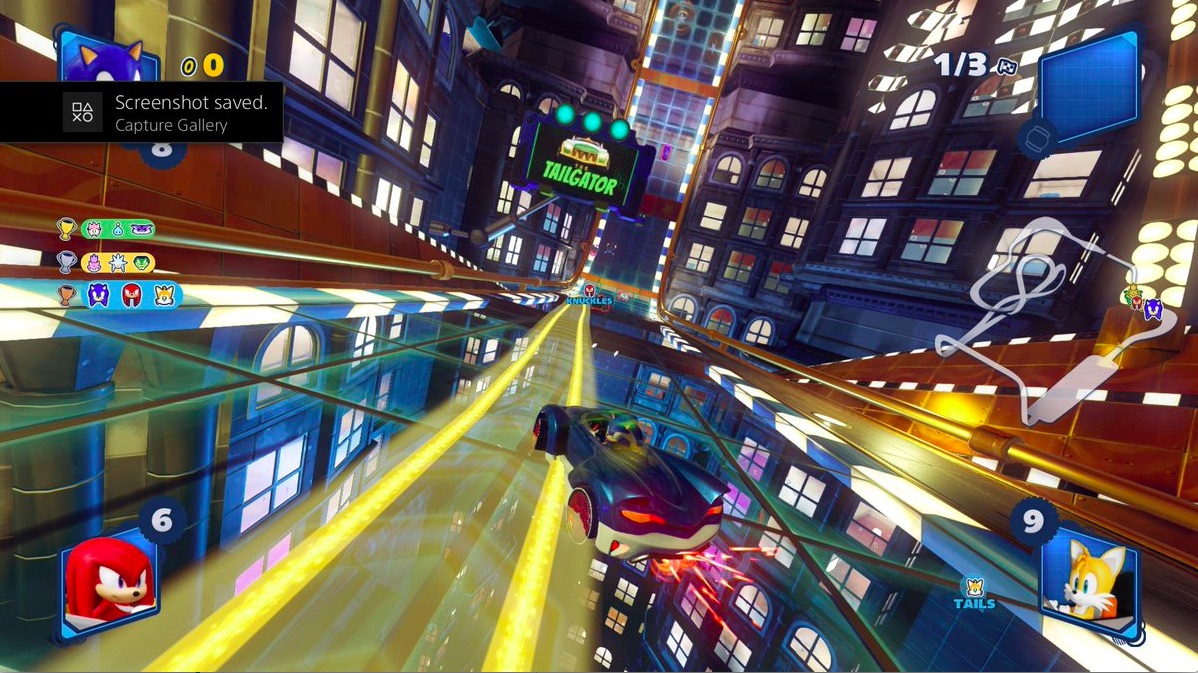 Now let’s talk about the actual gameplay this is where things get interesting, the game really emphasises the “Team” part of the title of the game as you are racing as a team of three. How this works is that you can reliably place in the top three in races as long as your team mates come in first, second or third. Not only that they can help you get ahead in races as they can give you the upper hand with items and they can speed you up with what the game dubs as “Slingshot”, which is their version of drafting. Like most kart racers there are a variety of power ups to use, these are in the form of Wisps which can range from rockets, boost, ghost and cube which acts as a solid object to stop someone in their tracks. To be honest the power ups are by the numbers and don’t really standout, but that is okay as the driving mechanics are tight and fluid.

The presentation in this game is bright, colourful and vibrant it’s a nice change from the realistic dark and grey hues from the more mature games. However it can be a bit overwhelming the colour palette, where it got a bit too much when I was playing in a dimly lit environment. Each stage is different visually from beautiful beaches to lush green forests from the signature Emerald Hills from the Sonic games. It runs well for the most part at 60 frames per second, however the game really struggles when there are lots of particle effects on screen, where it starts to stutter somewhat. 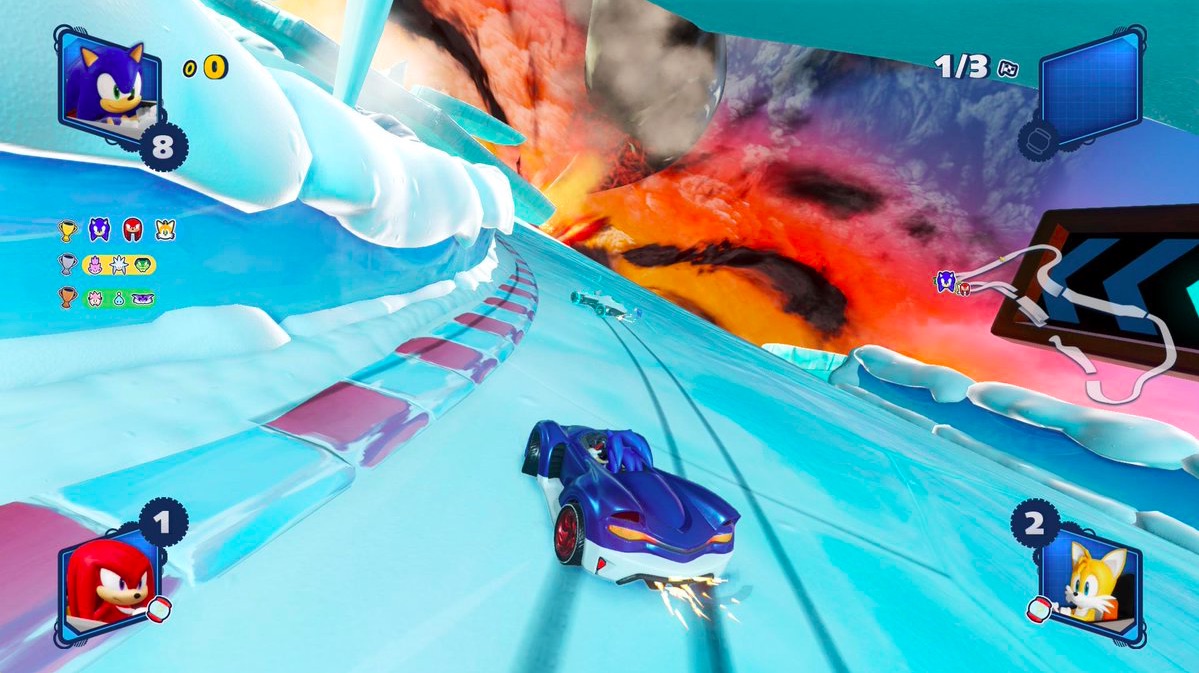 The only real issue I had stemmed from the dialogue which was ear grating to be put it politely, they repeat and say their quips too often throughout a race. However it was 2 hours into playing the game that I found out you can turn the dialogue off, which gave my ears a well-deserved rest from the terribly written quips.

Team Sonic Racing is an enjoyable kart racer for all the family, it was a nice change of pace from the more mature and depressing games I have been playing recently. It’s bright, colourful and extremely fun to play, it’s something we are short of these days and something we need more of. I can recommend this to someone who is a child or an adult, it is a must play.