Special Kinda Madness reviewed at The Fleece in Bristol 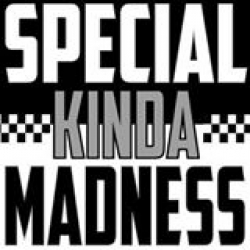 Special Kinda Madness are a bang-on-the-money tribute at The Fleece in Bristol for a rowdy, crazy, fun-loving crowd of fans. One irrefutable House of Fun.

Tribute bands are an unpredictable bunch and usually slip into two categories. The first takes the music and drags it kicking and screaming through a cacophony of pale imitations and scattershot interpretations that pervert them to such an extent you wonder if they ever actually heard the originals. The second group consists of musicians who know the music so well it's almost ingrained into their DNA, a second skin through which they seem to live and breathe and recreate the songs with such spooky precision it's difficult to tell them from the real deal.

Special Kinda Madness unquestionably falls into the latter camp. They ran through the gamut of Madness' unmistakable back catalogue, covering all the hits with such uncanny accuracy you could have closed your eyes and sworn it was Suggs and the gang on stage. One Step Beyond, Our House, Baggy Trousers, It Must Be Love, Embarrassment, Night Boat to Cairo, Wings of a Dove - they were all confidently and expertly recreated, pitch perfect, faultlessly timed and stylistically spot-on.

But the 2-Tone, Ska-fuelled rhythms didn't stop there. After a break which gave the amassed and heaving multitudes a chance to head to the bar for a re-fuel or to spill out onto the cobbled streets for a spot fresh air, the band returned for a set covering the hits of The Specials.

Reviewed by Jamie Caddick for 365Bristol - the leading Bristol events and entertainment website.