Review: Waitress at The Bristol Hippodrome 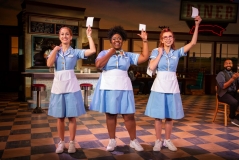 A standing ovation for this inspiring ensemble production!

Diane Paulus' Waitress, The Bristol Hippodrome's February blockbuster, is based on the 2007 comedy-drama of the same name, written and directed by the late Adrienne Shelly who tragically lost her life weeks before the film's premiere. This production, complete with rave reviews and a star-studded cast, is brought to us by a groundbreaking, female-led creative team including Paulus, the Grammy-award winning Sara Bareilles (Love Song and Brave) and acclaimed screenwriter Jessie Nelson.

As the show starts you are introduced by an alto singer whose voice is as powerful as the spotlight which shines on her. From then on you are drawn into the story which unfolds. Jenna, “The Waitress”, lives in the American south, trapped in an unhappy marriage with her controlling and abusive husband. She works in Joe's Pie Diner, where her job includes creating inventive pies with unusual titles inspired by her life.

Jenna longs to run away from her dismal marriage and is slowly accumulating money to do so. She pins her hopes for escape on a contest in a nearby town, which offers a grand prize. Her only friends in the town, her co-workers (Becky and Dawn) and the owner of several other local businesses (who is a regular customer of Jenna's at the diner), encourage her to begin a new life elsewhere. Jenna's life changes after she meets her new obstetrician, Dr Pomatter - played by Matt Willis of Busted fame.

A simply stunning performance from Chelsea Halfpenny on @tnluk #BigNightOfMusicals ????

Order up and grab tickets to the sweetest musical on tour coming to Bristol from Tue 8 Feb ????

The Waitress is a romantic and theatrical comedy complete with jazz-style music. The performances of each actor are beyond exceptional ranging from their singing to storytelling. Chelsea Halfpenny (Emmerdale and 9 to 5 The Musical) stars as Jenna with her emotional delivery and startling confidence becoming more and more clear as the story goes on. Her co-stars Sandra Marvin (Emmerdale and Hairspray) as Becky and Evelyn Hoskins as Dawn are equally as great and the dynamics between them is flawless. The jokes, the singing and the little scenarios in between really make the musical and showcase the talent of each performer throughout.

The main actors of Jenna’s colleagues and friends excel at portraying real people who are there to support her through her struggles and are such amazing performers together. The chemistry between them is unbelievable, the passion they gave in the performance blew me away. For the actors to portray the characters so well within the show proves that they must have gone through relentless practices and potentially even method acting to understand their assignment. Jenna's relationship with her husband and how Halfpenny portrayed her emotion made everyone pity her, especially due to the situation she was in. The husband played his character splendidly, successfully depicting a villain the audience could unite in their hatred of.

During the performance, there were no awkward gaps or pauses in between lines and every note sung by the performers was hit to the semitone. The band had me tapping my feet along with them and trying to learn the melodies they were playing. The ensemble backed up the main actors perfectly and complemented the singers extraordinarily. The dancing was spectacular and excellently choreographed, in sync and smooth. If there was one character, and actor, that stood out the most it was probably Becky due to her loud personality and continuously jokey demeanour.

Overall Waitress the musical is something worth watching, especially if it is your first time coming to the theatre. This was categorically proved by the theatre-wide standing ovation given at the end of the show.

To find out more about what's coming up at the Bristol Hippodrome, head to the theatre website.