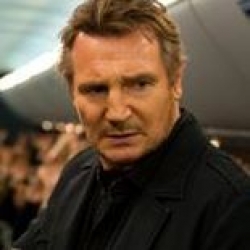 Take it for the trashy, nonsensical, outrageous fun that it is, switch your brain into neutral, and you'll have a hell of a good time.

At 61, Liam Neeson has become a somewhat late entrant in the pantheon of action movie heroes. In recent years we've seen him fight killer wolves in The Grey, have his wife and identity stolen in Unknown, and his daughter kidnapped by Albanians in Taken.

It's a role he's taken on with gusto and verve, battling the bad guys with face-slapping, bone-crunching glee, occasionally the ultimate anti-hero but never afraid to expose his more vulnerable, human side. He's become a global superhero, the everyman of the action world, and perhaps the most convincing average Joe battling extraordinary circumstances since Harrison Ford as Indiana Jones or Jack Ryan.

The premise to Non-Stop is text book high concept: Bill Marks (Neeson) – a washed-up, alcoholic, U.S. Air Marshal boards a flight across the Atlantic and receives a series of threatening texts from an unidentified passenger saying someone will be killed every 20 minutes unless $150 million is deposited into an offshore account.

And so the heat is on, as Neeson whittles his way through the motley crew of passengers to suss out who the real terrorist is. Everyone's a suspect here, catching suspicious glances from potential distrustful passengers, and ticking the boxes of characters that may or may not play an important role later (Muslim doctor, New York cop, nerdy teacher, uncooperative youth).

It deftly points us wrong directions, misguides and narratively trips us up, racking up a claustrophobic atmosphere of suspicion and suspense as Nesson relentlessly exchanges texts to catch his man. It's a kind slick narrative combo of Agatha Christie and Cluedo whodunit at 40,000 feet.

There are a few cracking action sequences, including one fantastic, brutal fight in a locked toilet where there's barely enough room to swing a punch but there's a flurry of jaw-snapping fisticuffs.

Director Juame Collet-Seraa, who also directed Neeson in Unknown, choreographs the set pieces with a slick and stylish flourish, and he's aided by some effective, disorienting cinematography by Flavio Martinez Labiano, and an occasionally pulsating score by John Ottman which accentuates the taut, tense atmosphere. Julianne Moore also comes along for the ride to offer Neeson calming support amidst the unfolding fear and paranoia.

But the movie's real trump card and saving grace is Neeson,a hulking, grimacing, growling monolith of a man who you're often unsure is going to rough you up or burst into tears. Here he's a broken man, still suffering from the loss of his young daughter, distraught, emotional, totally vulnerable and exposed, yet brimming with frustration, anger and anxiety as he tries to convince passengers of their plight as they start to turn against him.

He's a commanding, imperious presence with a huge amount of gravitas, full of brooding and melancholy, stomping through the aisles and barking lines such as "I'm not here to blow up the plane, I'm here to save it!" with absurdly believable, almost Shakespearean passion. Even his final, personal plea for understanding as he gives a quick synopsis of his life story has an emotional weight and power ("I'm not a good father. I'm not a good man. But I want to save this plane.")  It's something only Neeson could pull off effectively with such anguished, pained humanity.

Ultimately though, this is big, dumb and incredibly fun action fare, a B-movie genre piece writ large and total, occasionally exhilarating, popcorn fodder. Take it for the trashy, nonsensical, outrageous fun that it is, switch your brain into neutral, and you'll have a hell of a good time.