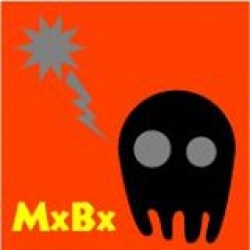 Melt Banana has toured extensively over their 22 year career, honing the skill of matching audience captivation with the sheer enjoyment of playing the music. Yako?s distinctive female vocals were spot on as ever.

Japanese noise-rock band Melt-Banana stormed The Fleece in Bristol last night in a rage of vibrancy and energetic passion.

There were two support acts on the night, the first being Giant Swan. Using loop pedals, tons of reverb, and an array of dials and switches, the two members of the band worked tirelessly over a board of flashing lights. The product was a highly unusual and technical sound, almost hypnotic in nature. The entire setlist was one song that pulsed and developed, slowly adding more and more layers to the complex, atonal sound, almost like a journey through their musical vision. It was an intense experience, not a band I was acquainted with beforehand but certainly one which has sufficiently piqued my interest for further exploration.

The second support act, Memory Of Elephants took to the more traditional approach of actually using instruments on stage, bringing another element of technical music to the night. They used some extremely odd time signatures, pushing them snugly into the genre of math-rock, compiling an array of effects. Much to my surprise and after double-checking to make sure, the drummer was using only one bass pedal, which seemed incredible as their sound was fast, complex and exciting.

When Melt-Banana came onstage they swept right into the first song, a small but enthusiastic mosh-pit opening up almost straight away. The band has toured extensively over their 22 year career, honing the skill of matching audience captivation with the sheer enjoyment of playing the music. Yako’s distinctive female vocals were spot on as ever, almost yapping the lines to songs such as Shield Your Eyes, A Beast In The Well and Candy Gun. Although hailing from Japan, Melt-Banana’s lyrics are all in English. As Yako says, “When I first started singing in a band, I was singing in Japanese, but I changed to English. I thought that English would fit more to my style of singing.” They also brought out the classic “8 short songs” segment, playing 8 very brief songs in quick succession, broken up only by the harsh shout of the song title. This is something Melt-Banana have done in most of their previous shows, something for fans to really look forward to, and prompting great excitement to break out among the crowd.

The Fleece itself has been in the hearts and minds of many a music-loving Bristolian of late, and as the gig took place last night I found myself understanding why it would be such a devastating loss if it were to close. As ever, the venue provided the perfect mix of DIY-punk-style intimacy and professional facilities, cramming as many enthusiastic humans as is physically possible into one room.

The band are wonderfully engaging stage presences, with Yako and Agata both jumping and diving across the stage, and Agata wearing his trademark surgical mask throughout the entire performance. The sheer energy and vibrancy presented in this gig was outstanding. Both members clearly adore playing live music and get huge enjoyment out of the frenzy they are capable of creating in an audience.

Overall the band gave everything that could be desired of them. They performed every song to perfection, exuded energy and good-feeling, sold affordable merchandise and were very friendly to the huge audience around them. An excellent way to promote their most recent album Fetch, which came out last year, the night was full of colour, life and noise.