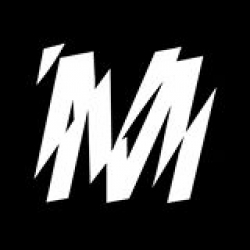 Mathilda's Chilli Bar comes across as a consistently enjoyable homely post-work meal and drinks out, priced fairly reasonably and open 5-11pm Wednesday through to Saturday. The relaxed vibe and minimal décor is great for unwinding with friends.

Mathilda's Chilli Bar wears a stripped back, basic, kitchen diner décor, which suits its location in the underpass between the Bear Pit and Bristol Bus Station, a location which could leave it easily and frequently missed if you don't already know about it. Open only four months now, it was quite empty, but popularity is growing as word of mouth tells of its presence and uniqueness, and surely some trademark desserts too, which I was keen to try out! 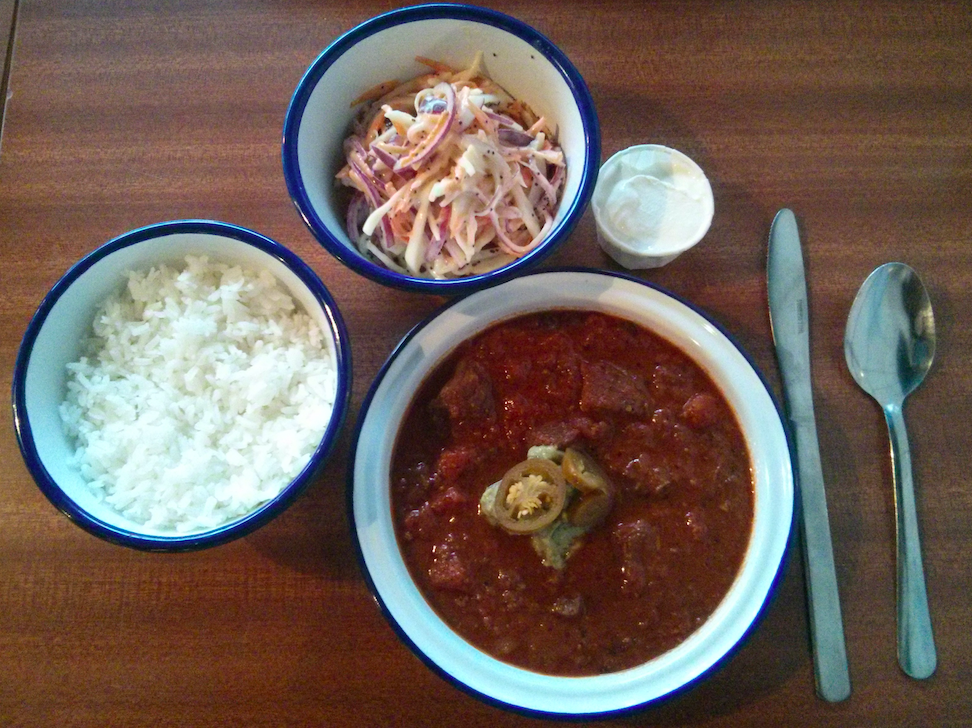 As old-school hip hop beats filled the diner, my friend and I both ordered the Half & Half (£7.95), which means half 3 bean chilli and half texan brisket chilli, both of which can be ordered as dishes on their own. We also ordered a side of Poppy Seed Coleslaw.

The dish came in two bowls; one contained the half and half mixture, the second contained white rice, and a pot of sour cream also came with this main meal option. The bowl of Brisket was dressed with a dollop of Guacamole and three centrally arranged slides of jalapeño.

Overall the meal was definitely enjoyable, the Half & Half dish tasting homely and comfortably spiced, and the Guacamole and sour cream really complimenting the taste. However, my friend and I both agreed that each mouthful was nicer when accompanied with a jalapeño, so we'd have liked the dish to have been dressed with more. The flavour – in my opinion – lacked 'wow' factor, but this I suppose gave it more of a home cooked, humble feel to it. Nothing too intense, an enjoyably relaxed main meal to tuck into after a long day at the office, perhaps.

I was glad that the rice came with the meal, and was included in the price, as this is sometimes an additional cost, making for a rather expensive main course. The flavours of the Poppy Seed Coleslaw stood out on my tongue as I loaded each spoonful with rice, brisket, and coleslaw, with the poppy seeds giving it refreshing bite, in contrast to the warming flavour of the main dish.

Next was the dessert I had been waiting for. The £4 American Waffles that come with vanilla ice cream and your chosen sauce from a choice of Chocolate Sauce, Blueberry Coulis, and Maple Syrup. I chose Chocolate Sauce and my reviewing companion chose Maple Syrup. 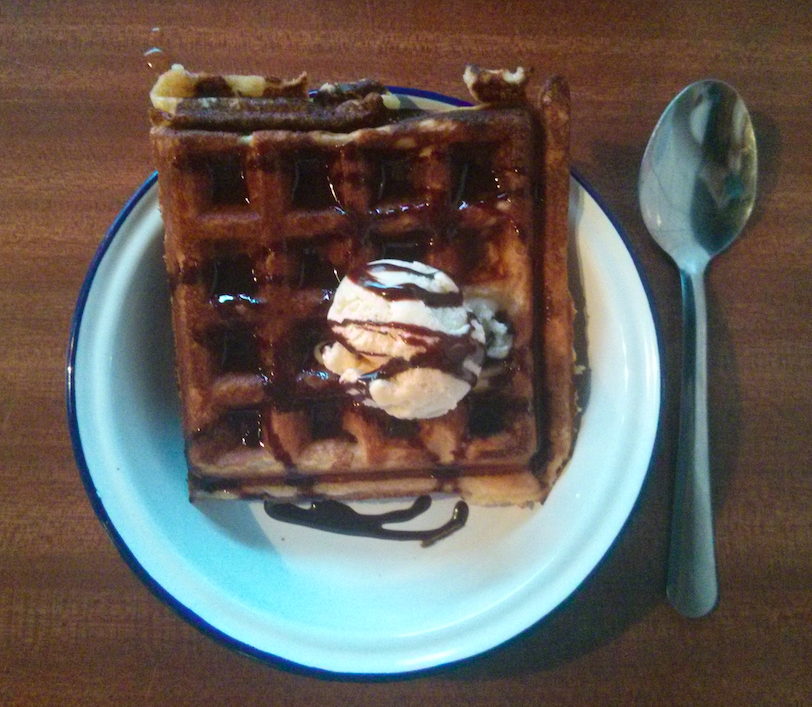 The American Waffles were beautifully crispy, and we gobbled them down before we could even exclaim how delicious they were. They were warm and not overpoweringly sweet, which is great for not being too bloated having scoffed it, but could also be seen as a little disappointing if you're a massive sweet tooth and want a sugar overload. We concluded that they were the right degree of sweet, and finished our meal off brilliantly. We finished our final mouthfuls by dreaming that the waffles were two-tiered, but decided we felt nicely full and had really enjoyed our meal overall.

The small mains menu is this new restaurant's first ever menu which they're trialling for a while, I was told when I asked if their menu ever changes. But Mathilda's Chilli Bar comes across as a consistently enjoyable homely post-work meal and drinks out, priced fairly reasonably and open 5-11pm Wednesday through to Saturday. The relaxed vibe and minimal décor is great for unwinding with some friends in a low-key location, keeping really central and modest.

Reviewed by and pictures from Maria Skinner for 365Bristol