Edge of Tomorrow - 12A ? Bristol Film Review by 365Bristol 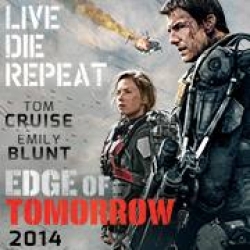 The eternally youthful Tom Cruise stars in what may well turn out to be one of the biggest hits of the blockbuster season. And deservedly so, for this Armageddon-laced, alien-invading movie hot-pot is a stylish, adrenaline-pumping and thrilling slice of sci-fi action hokum.

The main premise is simple: Lieutenant William Cage (Cruise) is a high-flying PR guy for the UK-based United Defence Force, press-ganged  into service for 'Operation Downfall' to wipe out the hostile extra-terrestrial Mimics, only to relive the same day over and over until he conquers them for good.

One's immediate response is that it's Groundhog Day meets space invaders. And to a certain it is, with Cage starting all over again from certain key narrative points and deathly scenarios. In fact, for anyone who grew up on a feast of films from the 90s, it draws on more than just Groundhog Day to explore its narrative drive and otherworldly conceits.

The time-loop set-up – the live, die, repeat of the movie's tag line – could also be snatched from Source Code.  The drop onto the Normandy beaches is a frenzied, exhilarating melange of brutality in the shaky-cam vein of Saving Private Ryan.  The biomechanical, multi-limbed ETs and the hi-tech conflict suits and weaponry are straight from the likes of the Matrix movies, Starship Troopers and Aliens.

No doubt there's a certain sense of filmic de ja vu – but it's given its own twists, turns and narrative licks to spray it with a fresh lacquer of fun and thrills.

Director Doug Liman and his screenwriting trio of Christopher McQuarrie and Jez and John-Henry Butterworth have taken Horishi Sakurazaka’s novel All You Need Is Kill and given  it a fresh spin to make it their own.

The film's most obvious direct influence is the world of video games, playing out the action and carnage with the visuals, relentlessness and tactics that would make any fanatical game-boy salivate.

The live-die-repeat repeat premise is ostensibly the player hitting the replay button, starting again after an untimely demise to perfect the game and survive to the next level, each stage revealing new and unexpected content to further the plot and Cage's chances of survival to the final showdown in Paris to destroy the commanding Omega Mimic.

Cruise is excellent – perhaps his best role and performance for some time – spinning out a convincing character arc from initial cowardly, smug, bureaucratic weasel to hard-core, gung-ho hero.

“I do this to avoid doing that,” he tells the General Brigham (Brendan Gleeson). “Can’t stand the sight of blood. Not so much as a paper cut.” A far cry from Top Gun's Maverick of 30 years ago, then.

And who better than Aliens' very own Bill Paxton to play the mantra-spouting marine barking orders to keep the rag-tag troops in line? "Battle is a true redeemer," he barks. "Tomorrow morning you will be baptised. Born again.”

The labyrinthine nature of the plot means you'll be scratching your head at regular intervals to work out exactly what pieces of the jigsaw fit together. It's also deliberately unclear as to how many lives Cage has gone through to reach certain points, and the brain-addling (il)logic of the time travelling plot occasionally digs itself into a hole and provokes more questions than it answers.

Nevertheless, Liman – just has he did with The Bourne Identity and Mr & Mrs Smith – has orchestrated a playfully frantic, fun-filled tour de force, crammed with eye-popping CGI, visual touches and pyrotechnics alongside plenty of breath-taking combat sequences.