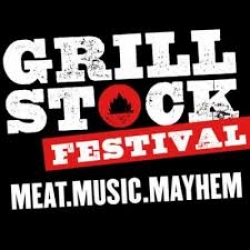 After several rounds of the milder varieties I merrily chomped through a Dorset Naga, Bhut Jolokia and finally a Trinidadian Scorpion at 1.5 million Scoville heat units before, alas, my natural purging instincts took over and let me down.

Meat, Music & Mayhem – 3 of my favourite things but not necessarily in that order. I was predominantly looking forward to a spot of mayhem on day 1 of Bristol’s 5th GrillStock BBQ & Music Festival - that is my participation in the chilli pepper eating contest that very afternoon. I've done some bonkers things in my time and that was fairly high up on the list.

A couple of hours earlier I had been preparing myself by lining my stomach with some of the best food the festival had to offer including hot dogs with slow roasted pulled pork & coleslaw from Pit Smoked BBQ. I also sampled succulent ribs & BBQ smoked chicken from various teams partaking in “King of the Grill” - an authentic two-day, US-style, low ‘n’ slow barbecue cooking competition. The ribs were a particular favourite and I believe had sold out pretty much everywhere by early evening.

The music was fantastic too. I’m sure the bass notes from Levi “Reggae, Reggae Sauce” Roots and his 13 piece band playing just before chilli hell kick-off were the same resonant frequency as my spleen. It certainly felt like it. And of course headliners The Fun Lovin’ Criminals put on a great show too featuring their Pulp Fiction hit, Scooby Snacks and Love Unlimited.

So, yeah, the chilli eating contest – I’ve always loved hot & spicy food and have chilli, in one form or another, on at least 2 out of 3 meals a day. However, as I soon found out, eating stupid amounts of super-hot chilli pods in quick succession is not the same as pouring gallons of über fiery sauce over your cornflakes. It’s a totally different ballgame altogether.

With chillies supplied by The Chilli Alchemist and the competition supported by the Clifton Chilli Club, it started out mild before rapidly climbing the Scoville scale to the hottest chillies on the planet. I’m proud to say I managed to get down to the final 3 out of the initial 12 fellow nutters that entered. After several rounds of the milder varieties I merrily chomped through a Dorset Naga, Bhut Jolokia and finally a Trinidadian Scorpion at 1.5 million Scoville heat units before, alas, my natural purging instincts took over and let me down.

Suffice to say, the purging was a good move as I didn’t suffer any of the undesirable side effects and could just enjoy the endorphin rush brought on by the face-melt pain.

Will I have another go next year? Hmmm…

by Matt Tangent, perhaps we can get him to join Hercules in completing all the Bristol eating challenges for 365Bristol!