Blood Brothers in Bristol at The Hippodrome

Blood Brothers was given a well deserved standing ovation and 4 curtain calls testament to a very enjoyable show that I would highly recommend anyone go and see.

Well if you aren’t that’s because you have tickets to see Blood Brothers at the Bristol Hippodrome and you won’t be left disappointed.

Willy Russell’s tale of twin brothers separated as babies when their mother is unable to care for them both, and growing up on different ends of the social ladder never knowing who the other truly is, is now in its 29th year, It’s even surpassed 10,000 shows in London's West End and now it has come to The Bristol Hippodrome for one week only.

The traveling set is quite striking yet simple and as the curtain went up a member of the audience was heard to say “gosh that’s pretty” and that it is. The cast themselves move props on and off the stage with ease and the smooth back drop alterations make the set changes in the story easy to follow. The performance itself is very emotive, the well known Maureen Nolan gives a stunning and heartfelt portrayal of Mrs Johnstone, her voice tells her story perfectly, blended with the drama from the story’s narrator Kristopher Harding who plays his role to perfection and brought a certain something to the role.

Then we have our twins Mikey (Sean Jones) and Eddie (Mark Hutchinson) and their childhood friends Lynda (Danielle Corlass) and Sammy (Daniel Taylor) who along with the rest of the ensemble will have you in stiches from the minute you see them on stage. The choreography is fun and lively and the songs certainly brought a smile to my face and had the whole audience laughing, although if you have younger children a word or warning here, there are a few expletives used. Tracy Spencer’s portrayal of Mrs Lyons was also quite moving and her duet with with Maureen Nolan is one of my personal highlights from the night.

The show was given a well deserved standing ovation and 4 curtain calls testament to a very enjoyable show that I would highly recommend anyone go and see. 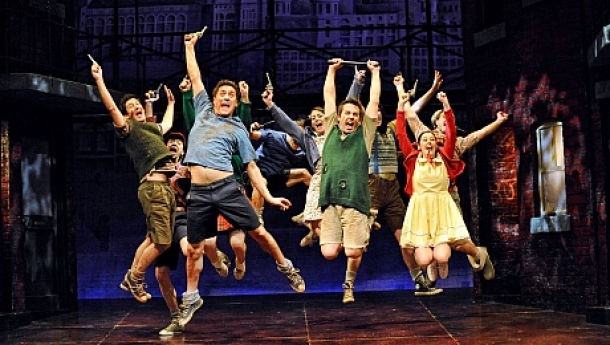