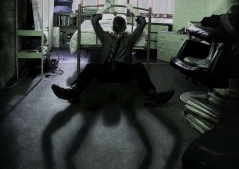 What can be a dense nihilistic text gains a lot when its channeled through a medium effectively, and Beyond The Horizon have challenged themselves on this weird and wonderful play, while simultaneously having a great time sharing it with the audience

I was expecting a physical exploration of the grotesque, I was greeted by a thought provoking portrayal of Franz Kafka's “Monstrous Vermin”. I caught Beyond The Horizon, a Bath based theatre company, at the midpoint of their tour in the Cotswold Playhouse in Stroud. It was fascinating to see how Co-Directors Adam Lloyd-James and Matilda Dickinson shaped their presentation of “Metamorphosis.”

The play follows Gregor Samza, a hard working company man, through a beyond conceivable transformation into a beetle. He goes to bed an ordinary man and wakes as a hideous and unsightly thing. The story unfolds the tension and discomfort stirred up by the change. 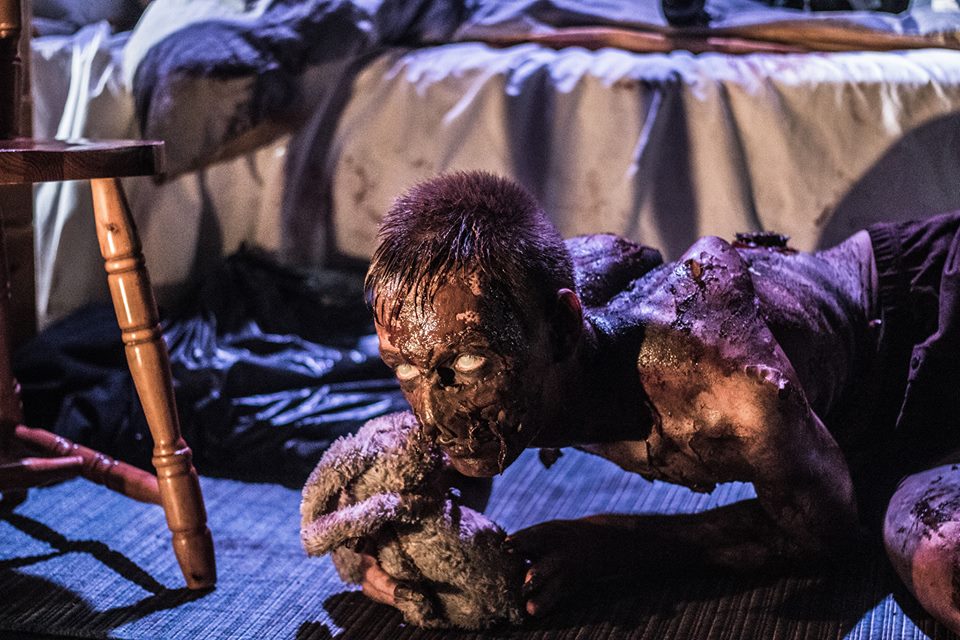 Gregor, played by Adam Lloyd-James, had the challenge of selling us a mild mannered worker as a scurrying creature. What he made possible in the space given was a surprising display of physicality. He was speedy, nimble and flexible enough to contort himself  enough to tease the right level of discomfort from the audience. Ellie Ekers, as Grete Samsa, was an important emotional note through the play. As Gregor’s sister she reflected the reality of his change in the real world. The on stage siblings generated the necessary chemistry to allow for an effective narrative arch. Mike Harley and Liz Hume, played at Mr and Mrs Samsa respectively.  Mike and Adam share a heated exchange midway through the play, as father and beetled son clash. A fight Choreographed by Black Dog Productions fight team, sets the scene for a turn in the tale in the second half. A respectable effort as Adams energy and physicality carry the urgency of the interaction.

Metamorphosis is loaded with heavy subject matter which, handled poorly, can make for challenging viewing. The directors considered this point and prescribed the help of Luke Hardwell. Luke takes to the stage as a hand full of characters, from The Doctor, to The Manager to the Lodger. Luke was able to present these tertiary characters without taking too much attention, he was there when the scene needed comic relief and knew exactly when to peel away. His take on The Receptionist and The Doctor definitely won the audience over with laughter.

Sarah Luscombe, the Makeup Artist, crafted a masterpiece for Gregor’s beetle. A textured pigment applied to the actors body to give the effect needed to convince us of his families disgust, It did very little to hinder Adams scuttering, crawling and leaping.

Gregor's room was a key scene, and the world outside his room reacting to the monster in the room was an important juxtaposition of moments. Hollie Marshall designed a set that allowed for the room to sit in the background of the stage with the rest of the house in the foreground. The cast ensured that their blocking made the most of this well thought up arrangement and maintained this viewpoint of the two aspect at the same time.

We followed the peaks and the twists in the play with a well orchestrated lighting design by Joe Samuels. Each turn towards a darker chapter in Gregor's experience was marked by a lighting shift and motif added by the sound designer, Finn Macneil. The sound, as well as offering ambience, served as Gregor's inner monologue as an obedience worker and as a speechless beetle.

Bath continues to produce brave and exciting work. I was impressed with the challenge the company took on with this production, they offered another layer of conversation to the Franz Kafka's classic. What can be a dense nihilistic text gains a lot when its channeled through a medium effectively, and Beyond The Horizon have challenged themselves on this weird and wonderful play, while simultaneously having a great time sharing it with the audience. The audience including myself bought into the performance and enjoyed the evening. I am excited for the remainder of their tour and look forward to what challenges they create for themselves next.

Saili Katebe is a Poet and Spoken word artist who fell in love with Bristol's creative underbelly. He enjoys tasting everything the city has to offer to the curious heart, eyes, ears and mind. If he is not taking to the stage he is in the crowd enjoying art in all its forms.