Revisiting this game has been an interesting experience, it’s a decent game but the story is rather bland, with Conor being as exciting as a piece of tofu with a frowny face on it.

Now I know what you are thinking “Sam why are you reviewing another remaster”? Well it is spring and new releases hide away and we get weird indie game, as well as remasters of last generation games. I want to give this one special attention as I didn’t really like it when it initially released, however I found myself enjoying it more this time round. Released in 2012 originally on the Xbox 360 and PS3, Assassin’s Creed III is a game that had the community split. On one had you have those who loved it on the other you have people who despised it, I’m in the middle as it has enjoyable moments, but there are times where I felt like I was dozing off. Let’s get into it! 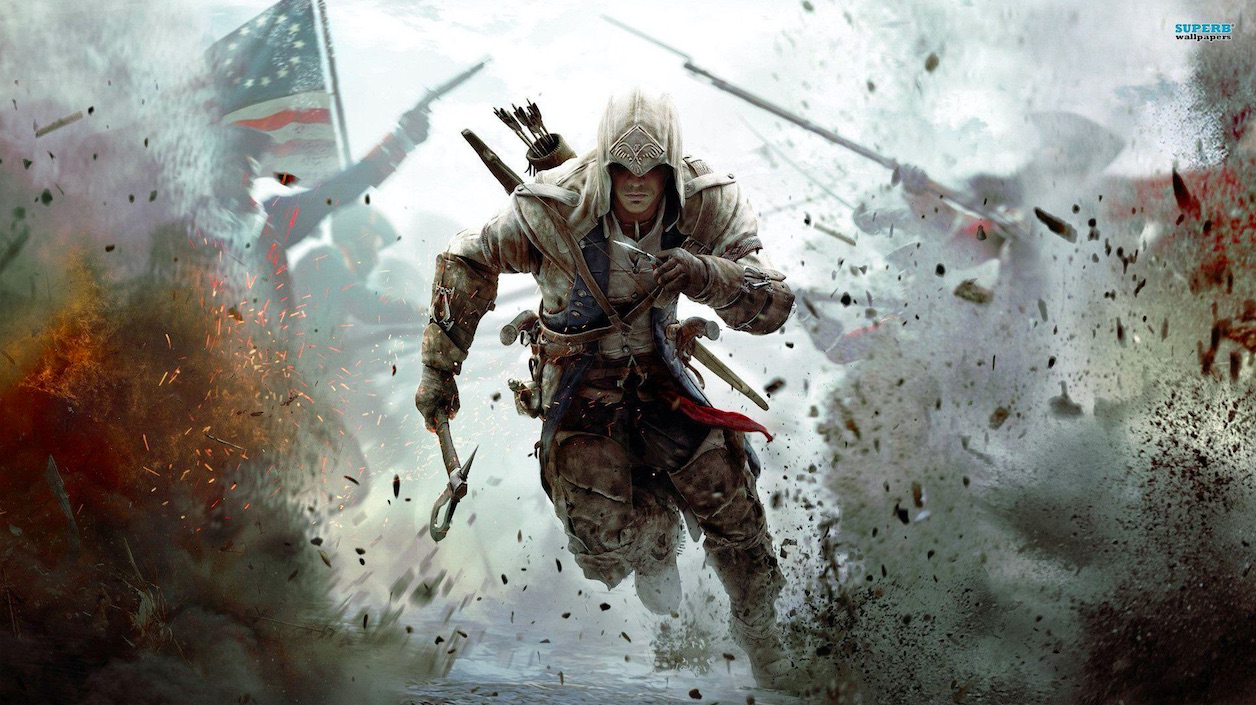 Assassin’s Creed III takes place during the American Revolution of Independence, where the British are trying to quash the rebellion and seize control. You play as a part British and part Native American named Connor; he is on a quest to kill Charles Lee because he was responsible for burning down his village and murdering his mother. It is later known that his father leads a band of Knights Templars who are sworn enemies of the Assassins. Connor trains to be an Assassin, so he has the skills to kill all that wronged him and help with the revolution. The story has its moments especially when you play as Connor’s father in the opening hours, however Connor just comes across as a bit bland and humourless which you could say it is intentional, but he is just monotone and made me fall asleep in some scenes.

The story maybe hit or miss the gameplay on the other hand is great, this is where they got the feel of how Assassin’s Creed games should control, where in other games it felt stiff. The game’s climbing controls are tight and fluid; it never gets old leaping from tree to tree in the frontier to then land on a red coat as you plunge a tomahawk into his chest.

Combat has also been given a boost in this game especially with the stealth elements, I feel like the Predator in the frontier when I stalk my prey to then rope dart an unfortunate victim and hang them from a tree. It’s brutal but cathartic the combat when you are surrounded you can get into a rhythm, where you cut down red coats with tomahawks, hidden blades and flintlock pistols. It’s stylish, over the top and extremely violent as you see blood fly everywhere when you plunge a hidden blade into someone’s throat.

This game introduced ship combat as well, which morphed into Assassin’s Creed IV’s pirate adventures. It feels great to set sail across the seas find resources, to then get into skirmishes with the British Navy with great sound design when you hear cannon balls zip past coupled with explosions.

The game has been given a visual bump in some departments; now let’s get the good out of the way first. The environments look fantastic the frontier looks beautiful, with frost laden trees during winter to the misty and humid mornings in the summer. Each colonial town has exquisite detail with dense crowds, ships coming into the docks delivering goods and buildings you can enter where you can get into bar fights. Now the problem that I have with the visuals are the character models they are a bit off, what do I mean? Well I thought I was going mad so I went back and loaded up my Xbox 360 copy of the game, and I was right. The faces look like they are made of rubber in this remaster; they look washed out and lack detail and blemishes compared to the original release where they look more convincing. It doesn’t apply to all the faces, but I noticed it on a lot of the main characters, which pulled me out of the experience somewhat.

Revisiting this game has been an interesting experience, it’s a decent game but the story is rather bland, with Conor being as exciting as a piece of tofu with a frowny face on it. However the gameplay is fun, with great stealth mechanics and combat that makes you feel like the Predator with the pure brutality. It’s not an inherently bad game, but there are scenes that make me snooze, it’s going to take more than dumping tea into a harbour to get me excited about this game’s narrative. I recommend it overall as it comes with the spin off game Assassin’s Creed III: Liberation, and all of the previous downloadable content.