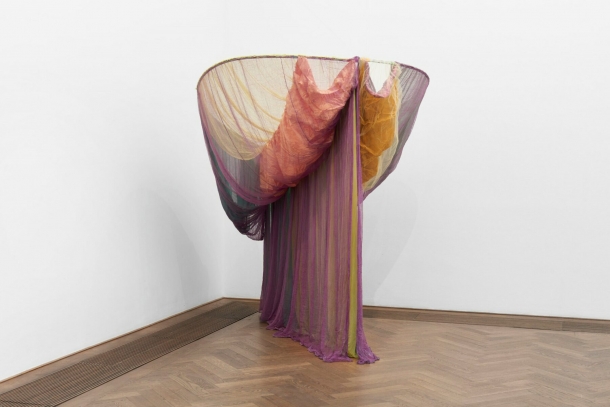 Ways of Attaching is the first institutional survey exhibition of artist Rosemary Mayer (1943–2014). It spans three decades of Mayer’s prolific and varied practice, from fabric sculptures, artist’s books and ephemeral installations of the 1970s through to ink drawings and pastels from the 1980s and 90s.

Mayer was born in Brooklyn and lived in New York City all her life. She was fascinated by history and her work often references historical artworks and writing, from Greek mythology to medieval literature and Mannerist painting. In 1972, Mayer co-founded A.I.R., the first not-for-profit, artist-led gallery for women artists in the United States. The following year, she held her first solo exhibition there of fabric sculptures named after historical and mythological women. Three of these works are on display here: Galla Placidia, after the regent of the Western Roman Empire; Hypsipyle, referencing the fabled queen of Lemnos in Ancient Greece; and The Catherines, celebrating every woman called Catherine throughout history (all works 1973).

An elaborate, handmade artist’s book titled Passages (1976) documents Mayer’s only trip to Europe in 1975 through exquisite drawings, collage and calligraphy on paper and vellum. Also on display is rare archival documentation of Mayer’s ephemeral installations of the late 1970s, which she called “temporary monuments”. Using materials such as weather balloons, ribbons and snow, these fleeting works reveal Mayer’s fascination with the passage of time, acts of naming and memorialisation.

Some of her later work became more muted and darker in tone. Black and white ink drawings of classical vessels from the 1980s are overlaid with menacing phrases that invoke feelings of fragility and despair. Likewise, extremely modest sculptures made from cheesecloth and rabbit skin glue from the 1990s seem like decomposed remnants of the lush materiality of her early pieces.

Ways of Attaching is the first time Mayer’s work has ever been shown in the UK. The title is purposefully equivocal: attaching is not only a method for binding materials together, but also for establishing connections with friends and peers, both living and dead, which was central to Mayer’s understanding of art.