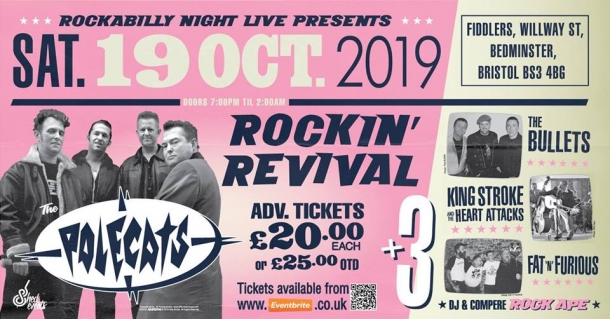 Rockabilly Live to bring Rockin' Revival to Fiddlers this October.

Attention Bristol rockabilly fans! If you're into slappin' bass, blistering guitar pickin' and hard-hitting beats, then you need to get yourself to The Fiddlers Club on 19th October for Rockabilly Live's Rockin' Revival! Tickets are on sale now but won't be around for long - get yours via the link below to avoid disappointment.

From the second the doors fly open at Fiddlers at 7pm on Saturday 19th October the club will be bouncing with rockabilly hits from some of the very best live acts this side of the pond!

Made up of not one, not two, but FOUR huge live acts, the lineup will be topped by none other than true rockabilly legends Polecats, who still haven't broken the promise they made back in the early 80s - "I swear I'm gonna be rockabilly 'till the day I die."

Providing support to the iconic Polecats will be London-based trio The Bullets, high-voltage outfit King Stroke and the Heart Attacks and hard-hitting blues rockers Fat n Furious. Time between sets will be taken care of by DJ Rock Ape, who'll serve as compere for the evening and round off the night with a huge set of rock n roll classics.


Doors for this one open at 7pm with Fat n Furious ready to kick things off at 7.30, with Polecats ready to take the stage at midnight. We advise you get down early for this one - you don't want to miss a single second!